Japan's ruling Liberal Democratic Party is on course to retain its majority in the House of Representatives in the Oct. 31 general election, according to a Kyodo News survey conducted through Wednesday.

Such an outcome would likely see new Prime Minister Fumio Kishida claim a mandate to pursue his COVID-19 and economic policy, under which he has pledged to realize growth and redistribute wealth to the middle class.

The LDP is set to win at least 233 of the 465 seats in the powerful lower chamber of parliament, while it remains uncertain whether it can hold onto the 276 it had before the election. 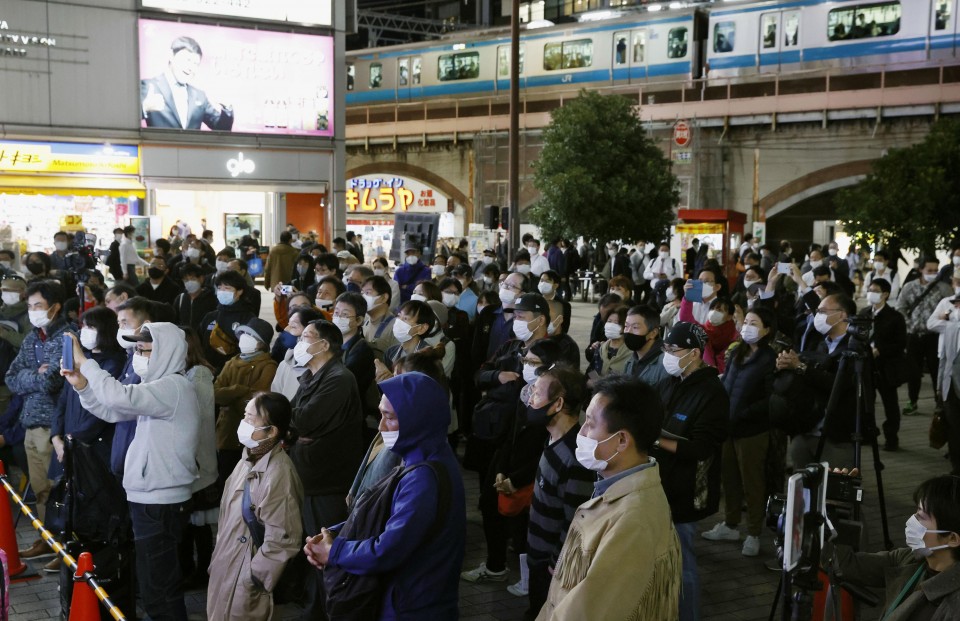 People listen to a politician giving a stump speech in Tokyo's Shimbashi area on Oct. 18, 2021, ahead of the Oct. 31 general election. (Kyodo) ==Kyodo

Candidates backed by the LDP are leading in around 190 of the 289 single-member districts, even as it faces stiff challenges from the main opposition Constitutional Democratic Party of Japan, according to the survey.

The LDP is also ahead in proportional representation, under which 176 seats will be allocated based on how many votes parties win in 11 regional blocks, reflecting returning support for the LDP after Kishida's unpopular predecessor, Yoshihide Suga, stepped down.

Kyodo News polled 174,000 eligible voters by phone on Tuesday and Wednesday immediately after the start of campaigning for the election. Nearly 30 percent were still undecided on who to vote for in their single-member districts, meaning the situation could change considerably by the time the race reaches the home stretch.

The CDPJ leads in about 50 single-member districts and is competitive in another 40 or so thanks to consolidating candidates with the Japanese Communist Party and other opposition groups.

But it remains unclear whether the CDPJ, headed by former Chief Cabinet Secretary Yukio Edano, can add to the 110 seats it held before the election, especially given its lackluster support in proportional representation.

The CDPJ was the most popular choice among survey respondents unaffiliated with any political group, 20.5 percent of whom said they will vote for the party under proportional representation. Of the swing voters, 14.7 percent backed the LDP, while 38.9 percent said they had yet to decide.

The JCP has a chance of adding to its 12 seats but is unlikely to make significant gains.

LDP's junior coalition partner Komeito party, which held 29 seats pre-election, is expected to make a solid showing thanks to its support base, the lay Buddhist organization Soka Gakkai.

Kishida has said he will claim victory if the LDP and Komeito come away with a combined majority, or at least 233 seats, a low bar considering the ruling coalition held 305 before the lower house was dissolved for the general election.

Meanwhile, the Japan Innovation Party is moving within reach of its goal of increasing its 11 seats to a minimum of 21, which would allow it to submit bills to the lower house without help from other parties.

The Democratic Party for the People has six candidates polling well in single-member districts, while the anti-establishment Reiwa Shinsengumi, headed by actor-turned-politician Taro Yamamoto, appears likely to pick up at least one seat through proportional representation.