Japan opposition vows to tax the rich in election platform

The main opposition Constitutional Democratic Party of Japan will pledge to increase taxes on rich individuals and large companies while easing the burden on lower- and middle-income households in its campaign platform for the general election this month, party sources said Monday.

The CDPJ will call for a temporary lowering of the consumption tax from the current 10 percent to 5 percent and will effectively exempt people who earn less than around 10 million yen ($88,550) annually from paying income tax, according to the sources. 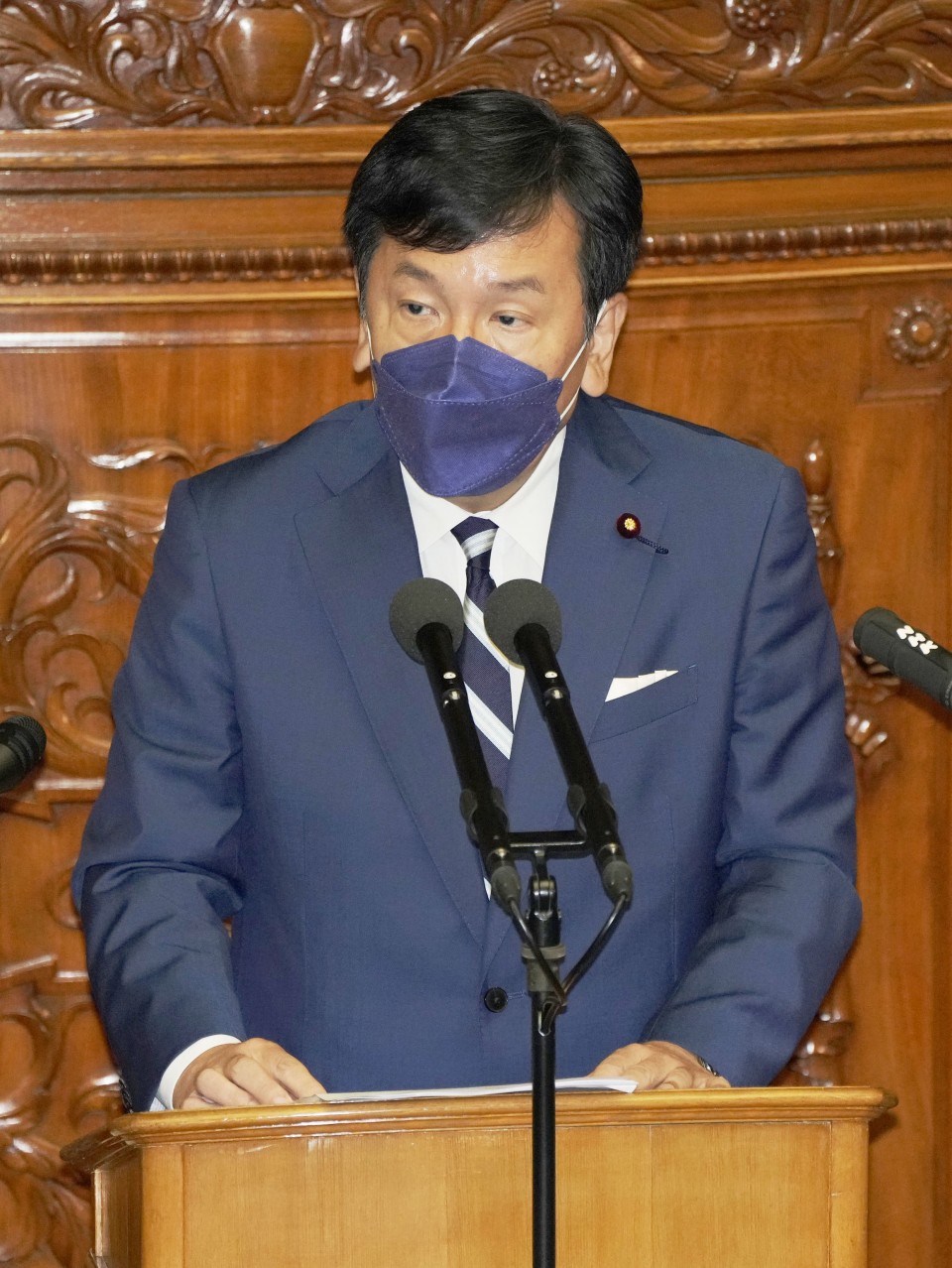 Yukio Edano, leader of the main opposition Constitutional Democratic Party of Japan, speaks during a House of Representatives plenary session in Tokyo on Oct. 11, 2021. (Kyodo)

The party apparently aims to one-up Prime Minister Fumio Kishida, whose vows to reduce wealth disparity are in question after he walked back plans to review Japan's capital gains tax.

The CDPJ's campaign platform will claim that "Abenomics," the policy mix implemented by the former Prime Minister Shinzo Abe and his successor Yoshihide Suga, has caused the gap between the rich and the rest of the population to widen.

In a bid to revive the coronavirus-hit economy and help the most vulnerable, the opposition party will promise to draw up a supplementary budget worth more than 30 trillion yen and give cash handouts of 120,000 yen to low-income individuals.

The CDPJ, led by Yukio Edano who served as chief Cabinet secretary when the CDPJ's forerunner party was in power, expects to boost tax revenue by about 10 trillion yen in total, by, among things, changing the corporate tax into a progressive system and raising the ceiling for income tax on rich individuals, according to a senior party official.

Kishida has said he will dissolve the House of Representatives, the powerful lower chamber of parliament, on Thursday for a general election on Oct. 31, with victory for his Liberal Democratic Party and junior coalition partner Komeito expected to give him a mandate to implement a large stimulus package to deal with the pandemic.

Regarding the capital gains tax, Kishida had suggested he was considering a review of the current flat rate of 20 percent but backpedaled on Sunday after the comments sent share prices falling, saying there were "widespread misperceptions" that the change would happen immediately.

The CDPJ looks to raise the capital gains tax to 25 percent by fiscal 2023 in principle and eventually lift it to 30 percent, Edano said in parliament Monday.

The Japanese Communist Party, which the same day unveiled its own campaign platform, vowed to give cash handouts of 100,000 yen to middle-income households and raise the minimum wage, currently averaging at 930 yen, to 1,500 yen per hour. Like the CDPJ, the JCP looks to lower the consumption tax to 5 percent.

Both the CDPJ and the JCP, which along with other left-leaning opposition parties are looking to consolidate candidates in competitive constituencies to snatch away seats from the ruling coalition, are seeking to legally recognize same-sex marriage and give married couples the option to use separate surnames.

The CDPJ's campaign platform is also set to include realizing carbon neutrality without relying on nuclear power. The JCP pledged to cut greenhouse gas emissions from fiscal-2010 levels by 50-60 percent by fiscal 2030 and have Japan join the nuclear weapon ban treaty.