U.S. should walk the talk on AUKUS: ex-Merkel advisor

A new U.S. Indo-Pacific strategy embodied in part by a trilateral security pact dubbed AUKUS will contribute to peace and stability in the region, but the way the secret deal was born has undermined trust among allies, a former German Ambassador to the United Nations said recently.

"The United States, engaged in foreign and security policy, is something very positive. I do see (benefits) in the AUKUS and the Quad," Christoph Heusgen, chairman of the Munich Security Conference Foundation's Board of Trustees, told Kyodo News in a recent telephone interview. 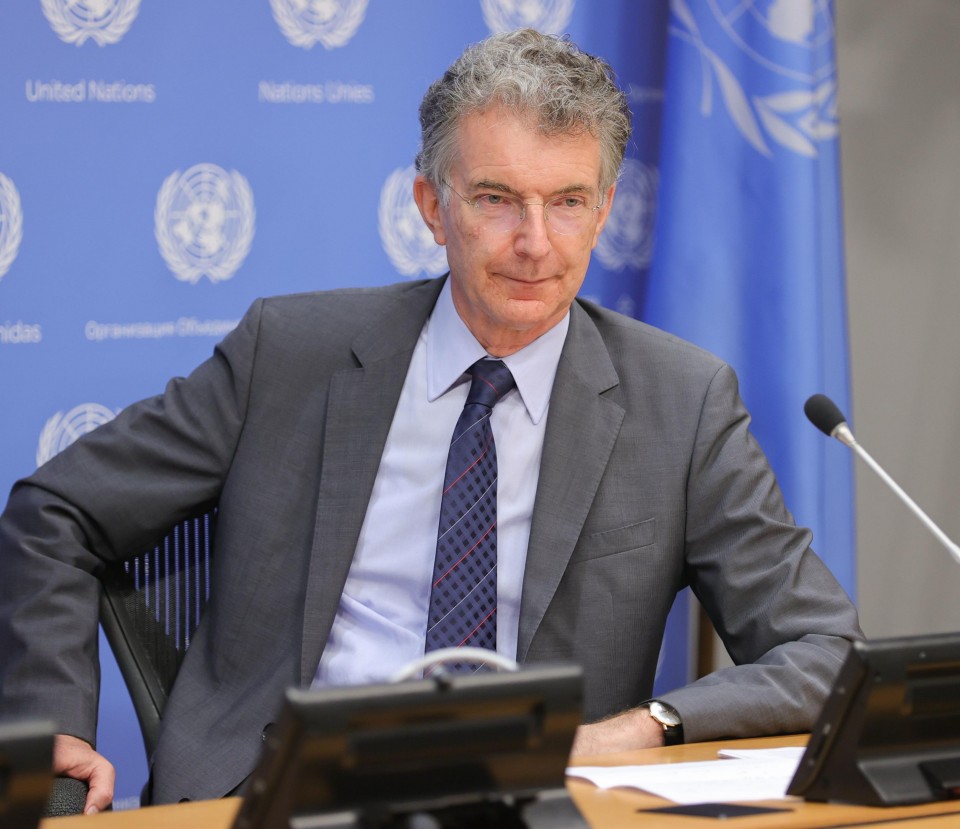 Christoph Heusgen, permanent representative of Germany to the United Nations, attends a press conference at the U.N. headquarters in New York in July 2020. (Getty/Kyodo)

"But I think the way AUKUS was founded and the submarine deal was done was damaging" to efforts in forming a united front to counter China, the seasoned diplomat with more than 40 years of experience said.

The United States, Britain and Australia announced the creation of AUKUS in mid-September, followed by the first in-person summit of the Quad, a grouping of major Indo-Pacific democracies comprised of the United States, Australia, India and Japan. The meeting was held in Washington.

AUKUS will let nonnuclear Australia build nuclear-powered submarines for the first time, using technology provided by the United States. As a consequence, Canberra canceled a multibillion-dollar deal with France to build 12 diesel-powered vessels.

Jean-Yves Le Drian, the French foreign minister, accused Washington and Canberra of lying over the AUKUS pact, saying "this brutal, unilateral and unpredictable decision reminds me a lot of what (former President) Trump used to do." He described it as "a stab in the back."

Heusgen declined to comment directly on Le Drian's remarks but echoed him by saying "what I criticize was that the AUKUS, (and) in particular the huge submarine deal, was done behind the back of France, a very important partner and permanent member of the U.N. Security Council. It was not helpful to maintain or strengthen the alliance."

Heusgen also said the United States did not sufficiently consult with allies who sent troops to assist the U.S.-led war on terror when it decided to withdraw from Afghanistan, despite Washington having assured allies of its intention to work closely with them.

The United States should be faithful to the commitments Joe Biden gives, he said.

Heusgen's comments reflect his conviction that democratic nations should stand united in support of rules-based international order and international law given China's foreign policy has been more aggressive since President Xi Jinping took office in 2013.

"We see it in particular in the South China Sea. And we have seen it in Hong Kong, where China violated an agreement with Great Britain which clearly said that there would be one country but two systems. But now it is one country-one system. We see also what is happening in the Taiwan Strait."

The Chinese military has established bases on various islands in the South China Sea that include anti-ship cruise missiles and surface-to-air missile systems, despite President Xi's nominal 2015 pledge not to militarize them.

China also enacted a national security law in 2020 to crack down on what Beijing views as subversive activity in Hong Kong. Among those to have been jailed since the law's introduction are activists, journalists and politicians. A pro-democracy newspaper that had been in circulation for 26 years, Apple Daily, was forced to shut down when the Hong Kong government froze its assets.

Along with AUKUS and the Quad, European nations have sent warships into Indo-Pacific waters to increase coordination to counter China. Germany deployed its navy's Bayern frigate in August to the South China Sea for the first time in almost two decades, a move which was followed by Britain and France which both sent vessels. The German warship is scheduled to make a port call in Tokyo in November.

"I think we, by sending our frigate there, participate in a demonstration of our support for the rule of law. Therefore, this is very important. And we continue to do so," Heusgen said about Germany's involvement at a time when incursions by Chinese military aircraft into Taiwan's air defense identification zone are increasing in regularity and scale.

Heusgen, seen for a long time as the most influential foreign policy and security adviser to outgoing German Chancellor Angela Merkel, said attention must be paid to members of the Association of Southeast Asian Nations because they are geographically close to China and economically susceptible to its sway.

He urged China and the United States to listen to ASEAN countries very carefully and "work very closely with them," rather than making them take sides between the two big powers. ASEAN countries "would really be affected most by a deterioration of the situation," Heusgen added.

Asked about what role Japan can play in its position between the United States and China, Heusgen hoped Tokyo, with its deep knowledge of the region, should advise Washington to craft and implement rational policies in close consultation with friends and allies.

He expects Tokyo to play a similarly positive role in influencing Beijing to temper its aggressive policies. Japan's new Prime Minister Fumio Kishida spoke by phone with Xi on Oct. 8 for the first time since taking office and agreed to seek "constructive and stable relations," Kishida told reporters.

However, he stressed that we are all in the same boat as democracies. "We are not in the middle of the road. We have to stand together" in securing the rules-based international order and international law, Heusgen said.