More than 1,000 Japanese companies and individuals including SoftBank Group Corp. Chairman and CEO Masayoshi Son are listed in leaked documents on tax havens dubbed the "Pandora Papers," at a time when managing wealth through offshore tax shelters has drawn criticism worldwide.

The names found in materials obtained by the International Consortium of Investigative Journalists also include Takeo Hirata, a former head of the Cabinet Secretariat section that was in charge of promoting the Tokyo Olympics and Paralympics.

The documents, dubbed the Pandora Papers by the Washington-based ICIJ, are leaked internal files from 14 entities, such as trust companies and law firms specializing in establishing and managing firms in tax havens.

Kyodo News is a media partner of the ICIJ project, which came to prominence after similar leaked documents called the "Panama Papers" in 2016 brought public attention to the issue of tax avoidance by the world's wealthiest people and companies. 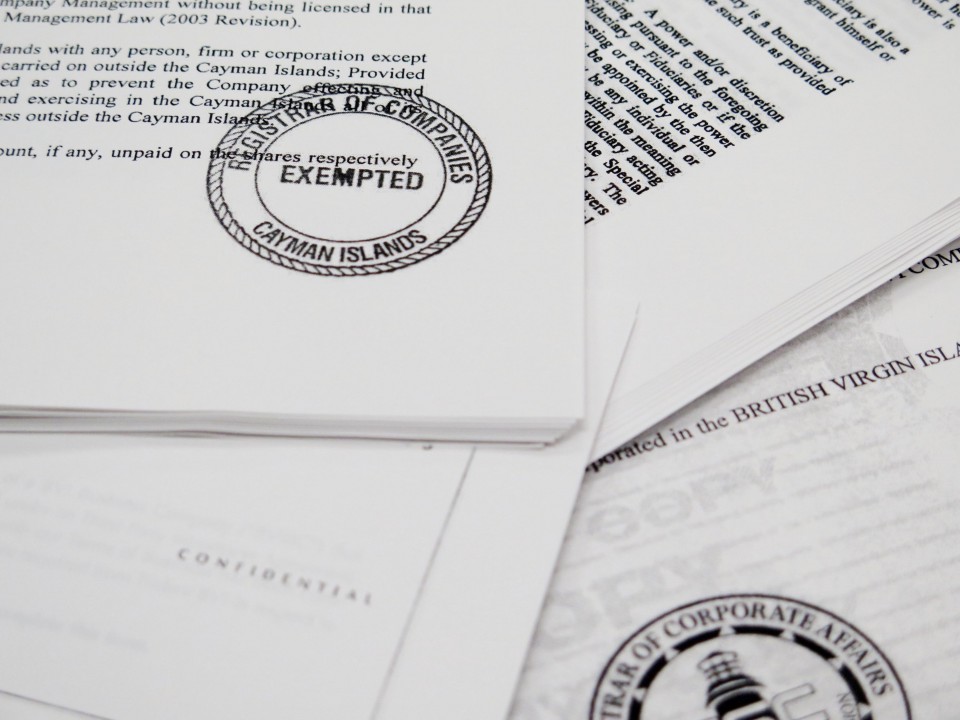 Photo taken on Oct 2. 2021, shows part of the "Pandora papers" obtained by the International Consortium of Investigative Journalists. (Kyodo)

According to the documents, Son purchased a business jet around 2014 through a company established in 2009 in the Cayman Islands, a British territory considered a corporate tax haven.

The ownership of the aircraft was transferred to a U.S. trust company and Son pays fees when he uses the jet based on a lease contract.

It is possible for someone in that situation to reduce their taxable income by paying usage fees of such an aircraft even if they effectively own it, as the fees can be considered a loss, according to legal and financial experts.

A SoftBank spokesperson denied Son processed the fees in such a manner, saying that the Cayman Islands company is a subsidiary of a Japanese company headed by Son and that the lease contract does not constitute tax avoidance.

The Pandora Papers meanwhile showed that Hirata established a company in the British Virgin Islands in 2004 during his tenure as general secretary of the Japan Football Association, and liquidated it in 2008.

Hirata, a former bureaucrat of the then Ministry of International Trade and Industry, said he heard about tax havens from negotiating partners he encountered when working on soccer and oil-related matters.

"I wanted to learn what it was like. I did not move any money even once," said Hirata.

Hirata resigned in August from the Cabinet Secretariat section promoting the Tokyo Games following a weekly magazine report that he had used a government vehicle to go to expensive golf lessons, and that he had been offered the lessons free of charge.

Another person mentioned in the papers, George Hara, a technology venture capitalist who served as a special adviser to Japan's Cabinet Office, owns a company in the Virgin Islands.

When approached about the matter, Hara said the company needed to be set up to meet requirements when launching new businesses in different countries.

The documents show the company, created for investment activities in Japan, had assets valued at $31 million as of 2017, but Hara contests that information.

A former executive of a now-collapsed Japanese chemical company owns a firm in the Virgin Islands with assets worth around $12.7 million. The company exists for the purpose of managing a foundation in Liechtenstein.

"I donated it before the bankruptcy. I don't know what happened to it afterward and the company is not mine," the former executive told Kyodo News.

In 2013, the Don Quijote discount store chain said its founder Takao Yasuda would sell the shares he held in the retailer to a company in Singapore. But the leaked documents and other materials showed the firm in the Southeast Asian country is an asset management company owned by Yasuda.

Corporate tax and levies on income from stock dividends are lower in Singapore, where Yasuda lives, than in Japan. A Don Quijote spokesperson said the discount retailer believes the tax treatment has been made within the rules.