A 28-year-old woman was stabbed to death on Friday night on the premises of her apartment building in the western Japan city of Amagasaki and police have detained her former husband in his 30s for questioning.

The police say the victim, Sayaka Morimoto, was found lying face-down with multiple stab wounds to her back near a bicycle parking area.

Morimoto, a medical clerk, was taken to a hospital after a delivery man called emergency services at around 8:20 p.m. saying that "a man possibly in his 20s or 30s" was stabbing a woman. She was pronounced dead at the hospital. 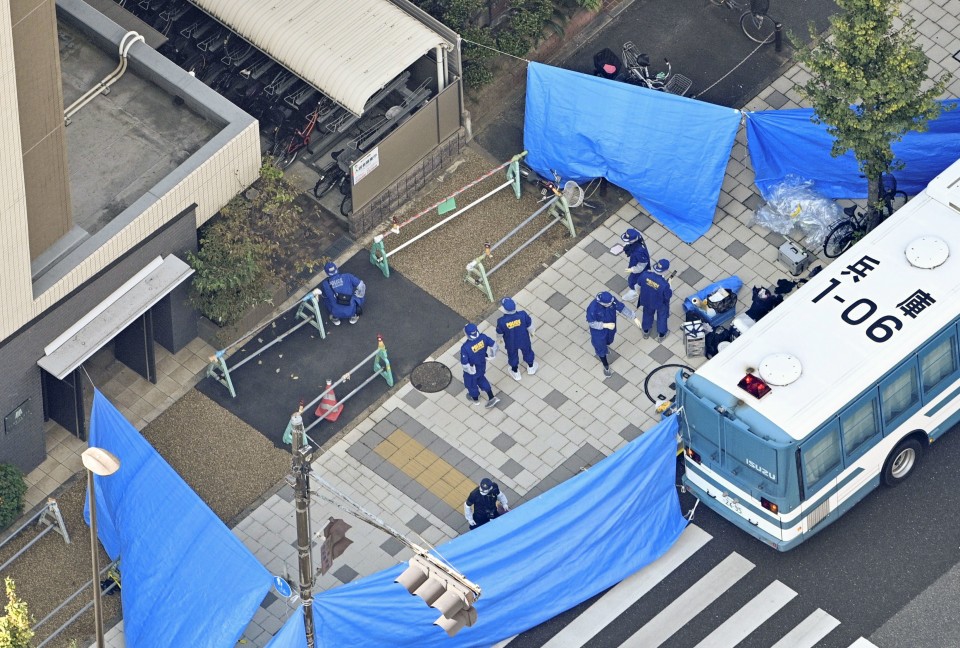 Photo taken from a Kyodo News helicopter shows police investigating the vicinity of the scene of a fatal stabbing of a 28-year-old woman in Amagasaki, Hyogo Prefecture, Japan, on Oct. 16, 2021.(Kyodo)

According to the police, security camera footage showed a man dressed in black entering a passage to the parking area shortly before the stabbing incident and later fleeing.

The police found a motor scooter with traces of blood that is suspected of being used by the attacker, and discovered it was registered to Morimoto's former husband.

Local residents and others said blood stains were seen in the passage, indicating Morimoto, believed to be living alone at the apartment, had been stabbed there.

Authorities believe Morimoto was attacked just after getting home, adding a backpack containing her driver's license and other items was found near the site. No weapon was found at the crime scene.

The apartment is located along the city's Route 2, about 350 meters from Hanshin Electric Railway's Amagasaki Station in Hyogo Prefecture.