A plan to introduce prison terms as part of tougher penalties for online insults in Japan was approved Thursday by an advisory panel amid a growing need to tackle cyberbullying, the Justice Ministry said.

The panel also discussed amendments to the criminal procedure law so that defendants will be required to wear a GPS device while on bail if they are deemed to be a flight risk. Its proposals were submitted to Justice Minister Yoshihisa Furukawa the same day, according to the ministry.

Recent high-profile cases in Japan involving insults in cyberspace include the death of Hana Kimura, a professional wrestler and cast member on the popular Netflix reality show "Terrace House" in May 2020. The 22-year-old apparently committed suicide after receiving a barrage of hateful messages on social media. 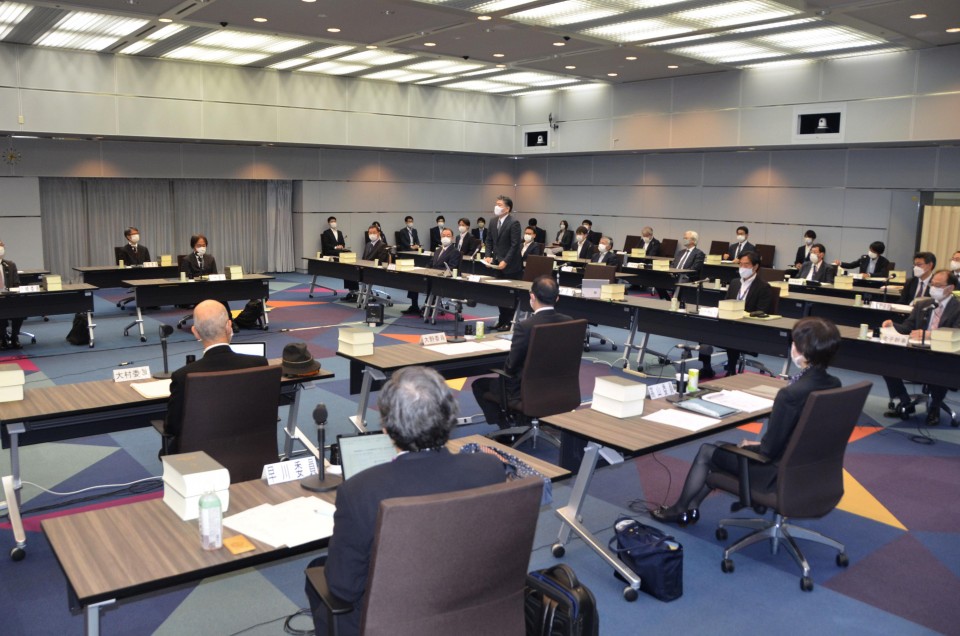 An advisory panel of the Justice Minister holds an extraordinary meeting on Oct. 21, 2021, to discuss tougher penalties for online insults among other law revisions. (Kyodo)

Two men in Osaka and Fukui prefectures were fined 9,000 yen ($80) each for making insults against Kimura, but there were voices of concern that the penalties were too light.

At present, the penalty against insults is detention for less than 30 days or a fine of less than 10,000 yen. The proposed amendments will introduce a prison term of up to one year and raise the fine to up to 300,000 yen.

The Justice Ministry is also planning to extend the statute of limitations for insults from one year to three years.

Measures to address suspects jumping bail were called into question after former Nissan Motor Co. Chairman Carlos Ghosn fled Japan for Lebanon while awaiting trial in 2019. There have also been a string of other incidents in Kanagawa and Osaka prefectures.

While there are concerns that tracking the location of an individual may infringe on their privacy, GPS devices also carry the advantage of removing the need for extended detention.

The drafted proposal, which aims to only prevent fugitives from fleeing overseas, will establish "no-go zones" such as airports and seaports. Unauthorized entry into the zones or the removal of the GPS device will be punishable by a prison term of up to one year.