Business confidence among major Japanese manufacturers improved in September for a fifth straight quarter as the economy emerges from the COVID-19 downturn but component shortages weighed, the Bank of Japan said Friday.

The key index measuring confidence among companies such as automobile and electronics makers rose to 18 in September from 14 three months earlier, the highest level since December 2018, and higher than the average market forecast of 13 in a recent Kyodo News survey.

The index for large nonmanufacturers, including the coronavirus pandemic-battered service sector, slightly increased to 2 from 1, for the fifth straight quarter of improvement. 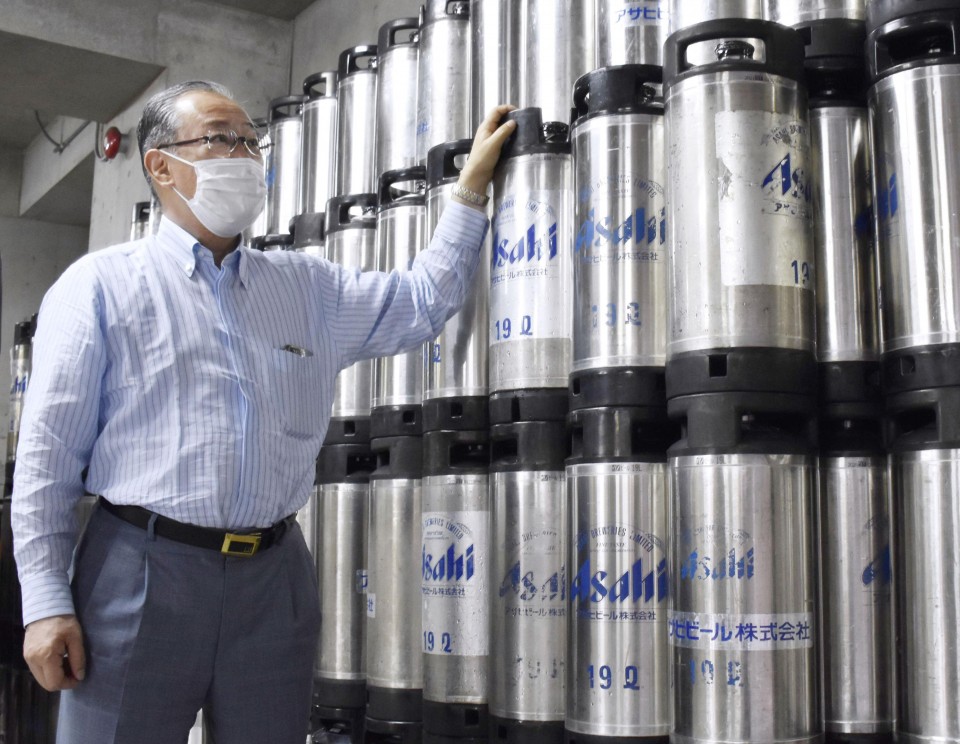 Photo taken on Sept. 30, 2021, shows beer barrels at a sake wholesale firm in Tokyo's Shinjuku Ward ahead of the lifting of the COVID-19 state of emergency at the end of the day. (Kyodo) ==Kyodo

"It came out stronger than expected," said Toru Suehiro, a senior economist at Daiwa Securities Co.

"What remains is the gap in the pace of recovery between manufacturers and nonmanufacturers. We should also note that there is a divergence within the manufacturing sector, too," Suehiro said.

Sentiment among sectors dealing with oil and coal as well as steel improved as they benefited from rising commodity prices, the BOJ data showed.

Manufacturers, especially automakers, have led the economic recovery from the shock of the coronavirus pandemic while nonmanufacturers have lagged due to protracted restrictions implemented to curb COVID-19 cases.

Restaurants, hotel operators and transportation services have borne the brunt, with a state of emergency that was in place until Thursday for Tokyo and other areas limiting people's activity.

Component shortages caused by factory shutdowns in Southeast Asia, a major production hub, and tight supplies of semiconductors have become a major drag on the auto sector in recent months.

In fact, confidence among automakers fell to minus 7, down 10 points from the previous survey.

Major automakers like Toyota Motor Corp. have been curbing output, casting a pall over the outlook as they form the backbone of the world's third-largest economy.

Fumio Kishida, the newly-elected president of the ruling Liberal Democratic Party who is set to become the country's next prime minister, faces the challenge of charting a recovery for the COVID-19-hit economy as the BOJ is expected to maintain its accommodative monetary easing for an extended period.

"Mr. Kishida is becoming prime minister at a good time because we are not likely to see the kind of sharp contraction last year due to COVID-19," Suehiro said. "With the state of emergency over, the economy will likely continue its recovery though growth may have been limited in the July-September period."

The latest survey suggests big manufacturers are cautious about the outlook.

Supply-side constraints are expected to continue and rising material prices could prove negative if demand weakens, even though they may be taken as positive in the short-term due to increased profits, economists say.

Sentiment among manufacturers is expected to worsen to 14 from 18 while that among nonmanufacturers will likely improve, albeit slightly, to 3 from 2.

Large companies, defined as those with 1 billion yen (9 million) or more in capital, expect a 10.1 percent gain in capital spending in the current business year through March, up 0.4 percentage point from the June survey.

The BOJ surveyed 9,360 companies, of which 99.3 percent responded between Aug. 26 and Thursday.