FOCUS: Japan looks to renewables, role of nuclear elusive ahead of election

Japan aims to increase its reliance on renewable energy in achieving net-zero emissions, but the role of nuclear power to be played toward that end appears to be elusive even in the government's energy plan approved by the Cabinet about a week ahead of Sunday's general election.

The plan outlines ways to achieve carbon neutrality by 2050 and cut greenhouse gas emissions 46 percent in fiscal 2030 from fiscal 2013 levels, an ambitious leap from the previous reduction target of 26 percent. 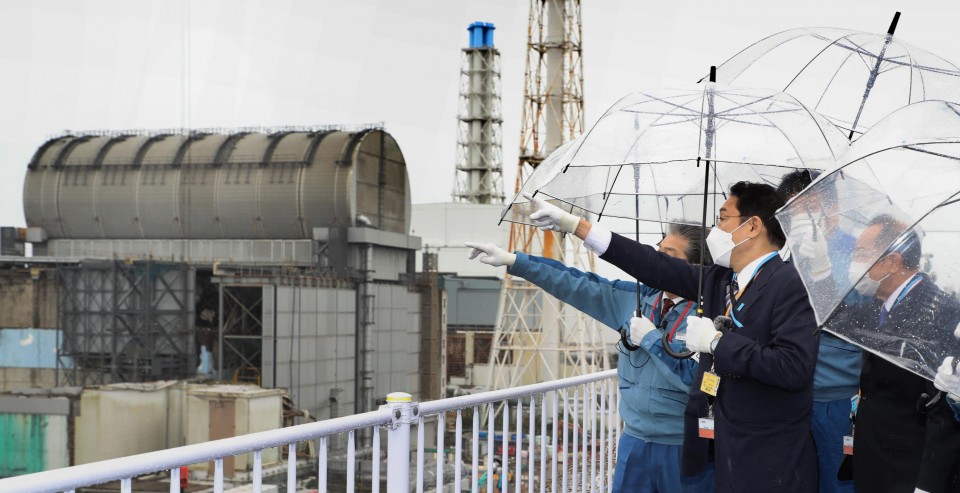 The government aims to have renewables account for 36 to 38 percent of Japan's total power generation capacity in fiscal 2030, more than double the 18 percent recorded in fiscal 2019, while the percentage of fossil-fuel-fired thermal power has been slashed to 41 percent, down from 76 percent.

But the percentage for nuclear power remains unchanged at 20 to 22 percent from the previous plan, released in 2018.

The status of many nuclear plants in 2030 and thereafter is unclear considering the facilities' 40-year operating limit and other regulatory hurdles, and there has been no public consensus on whether the country should continue to use nuclear power beyond 2050 either.

Yudai Maeda, an executive of renewable energy firm afterFIT Co., said people's emotional reactions toward nuclear issues have somewhat subsided from the years after the 2011 Fukushima nuclear disaster and voter interests have been taken over by the coronavirus pandemic. 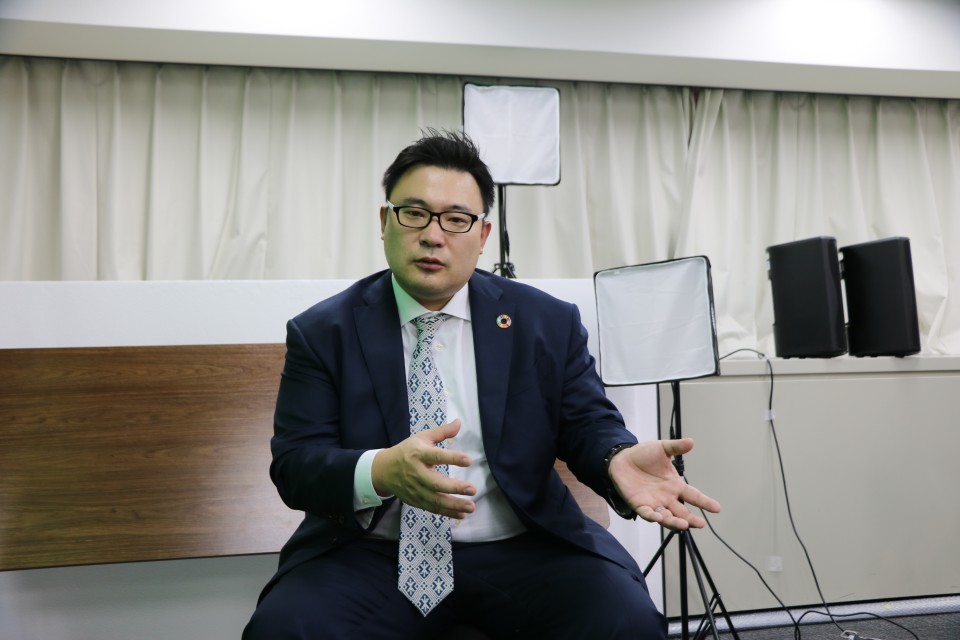 "Major issues in the election are more like how to restore the economy after the COVID-19 pandemic," Maeda said.

A recent Kyodo News poll showed 36.7 percent will decide on who to vote for in the general election based on economic policies, while 16.1 percent said coronavirus measures were paramount.

Tsutomu Miyasaka, a professor of biomedical engineering at Toin University of Yokohama and pioneering researcher on thin and flexible solar cells, also believes energy and environmental issues should attract attention, just as climate change was one of the key issues for German voters in their September election. 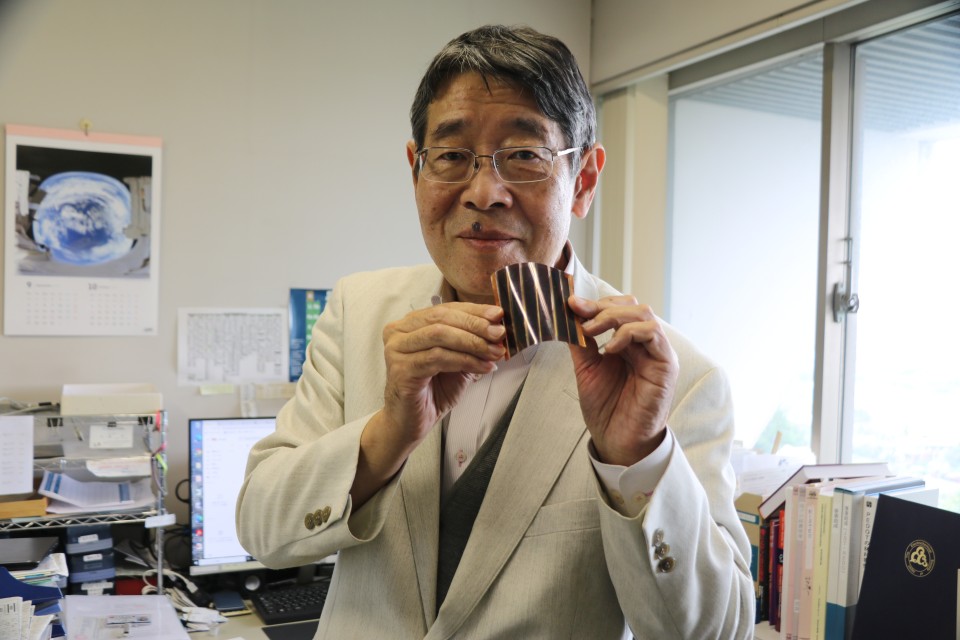 Tsutomu Miyasaka, a professor at the Faculty of Medical Engineering at Toin University of Yokohama, holds a perovskite solar module in an interview in Yokohama on Oct. 27, 2021. (Kyodo)

A report by the U.N. Environment Programme released this week warned that the average global temperature could rise 2.7 C by the end of the century despite various climate pledges and mitigation steps.

That is well above the aspirational goal of the Paris Agreement -- to keep global warming below 1.5 C this century over pre-industrial levels.

The international organization also said that whether the world can meet the goal of avoiding potential catastrophe hinges on efforts by humanity to halve annual greenhouse gas emissions in the next eight years.

"Climate change is no longer a future problem. It is a now problem," said Inger Andersen, executive director of UNEP, ahead of the upcoming U.N. climate change conference known as COP26. "The clock is ticking loudly."

To achieve the 2030 emissions cut target, Maeda said nuclear power plants are necessary. However, Japanese political parties cannot agree on what to do with nuclear plants even though they agree on the country's direction toward carbon neutrality.

In contrast, the major opposition Constitutional Democratic Party of Japan pledges to abandon nuclear power as soon as possible and will not allow any new nuclear plants to be built.

The Democratic Party for the People, a smaller opposition party, has said it will restart nuclear plants that cleared safety rules but will not allow the construction of new ones.

Following the nuclear crisis in Fukushima Prefecture triggered by a massive earthquake and tsunami, most of the nuclear plants in Japan remain offline under stricter safety regulations.

"Realistically, I think (Japan) cannot help but to heavily rely on nuclear and solar power to achieve that 2030 goal," said Maeda, a former Foreign Ministry official.

He stressed nuclear should not be a long-term power supply given the tremendous amount of money needed in the event of an accident and falling renewable energy costs.

In the long run, energy experts have high expectations for offshore wind power.

"Producing large quantities of electricity from renewables requires a vast amount of space. Since Japan is a maritime nation with the world's sixth-largest exclusive economic zone, it's got to be offshore wind," he said, adding floating turbines will hold the key.

Solar cells produced by Miyasaka, also a fellow at the University of Tokyo's Research Center for Advanced Science and Technology, are expected to contribute to improving the space problem for renewables if they overcome durability challenges and go into commercial mass production.

Miyasaka's perovskite solar modules are thin, flexible, and light yet capable of generating high voltages compared with silicon photovoltaics, with their characteristics enabling them to be installed or applied on unconventional places, including low load-bearing roofs, windows and automobile bodies.

In the not too distant future, Miyasaka believes people will be able to generate power by perovskite solar modules on places such as balcony floors and car bodies, store it in batteries and then use it during the night.

In building such a society, Miyasaka said the reliance on nuclear power could be reduced soon rather than later because disaster-prone Japan faces higher risks than many other countries.

"It is time for us to seriously engage in finding ways to live without nuclear power plants," he said.