After attending a series of meetings with leaders from the Association of Southeast Asian Nations and other countries, Kishida told reporters he raised concerns over the human rights situation in Hong Kong as well as the Xinjiang region in northwestern China and stressed the importance of peace and stability in the Taiwan Strait. 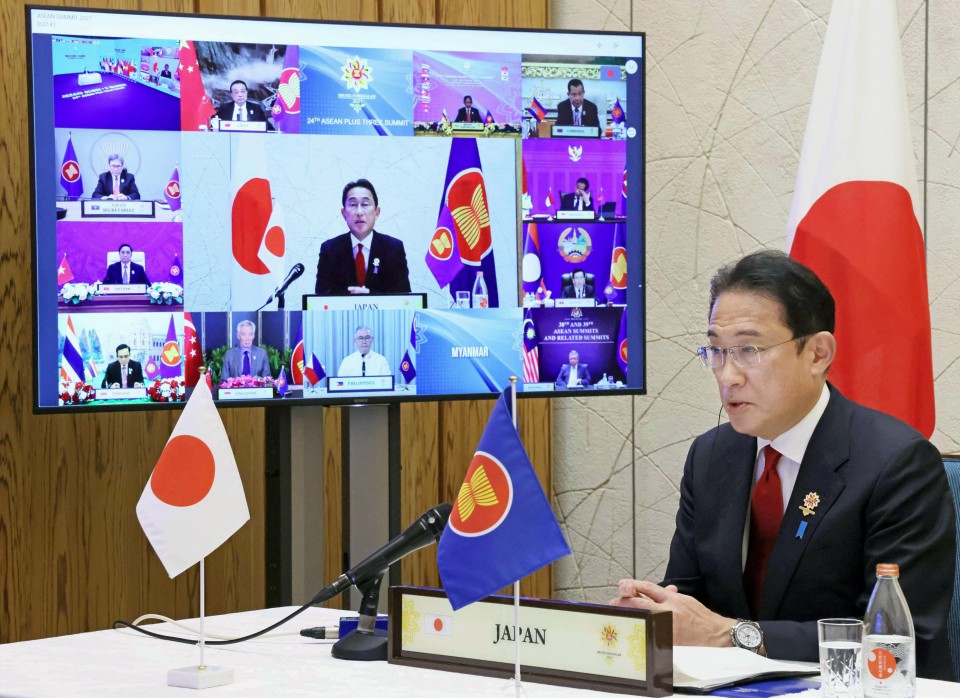 The Japan-ASEAN summit, held virtually amid the coronavirus pandemic, was the first occasion for Kishida to participate in an ASEAN gathering after replacing Yoshihide Suga as prime minister earlier this month.

Referring to his past efforts to enhance Japan's ties with ASEAN during his tenure as foreign minister between 2012 and 2017, Kishida said he continues to value the relationship with the 10-member bloc.

"This time, as prime minister, I will work closely with ASEAN and strongly promote efforts toward realizing a free and open Indo-Pacific," he said.

He also said Japan will steadily promote cooperation for the ASEAN Outlook on the Indo-Pacific, an initiative aimed at maintaining peace, freedom, and prosperity in the region, and that it shares the same values as Japan's vision of a free and open Indo-Pacific.

As 2023 marks the 50th year of ASEAN-Japan friendship and cooperation, Kishida said Japan plans to hold a special summit at that time to take the relationship to a "new stage."

Kishida and ASEAN leaders exchanged views on the situation in the East and South China seas, where China is increasingly assertive, as well as North Korea and Myanmar, with the prime minister telling reporters he "explained Japan's firm stance on these pressing regional issues."

Kishida was quoted by the Foreign Ministry as telling his ASEAN peers that Japan shares the group's deep concern about any moves challenging the rules-based maritime order in the region and strongly opposes such acts, in a veiled criticism of Beijing.

He also said North Korea is threatening the peace and security of the region and the international community by launching ballistic missiles, and asked members for their help in resolving North Korea's past abductions of Japanese nationals, to which members expressed support.

The prime minister said Japan supports ASEAN's action regarding the Myanmar coup in February, including a five-point consensus calling for an immediate cessation of violence and a visit by the ASEAN special envoy for a peaceful settlement of the crisis.

In their annual summit on Tuesday, the ASEAN leaders voiced concern about Myanmar, an ASEAN member state, and explored a balanced approach for addressing the political turmoil in the country.

The ASEAN summit was held without a representative from Myanmar as its military leader was excluded by the group.

Kishida said Japan has provided 5.5 billion yen ($48 million) for the ASEAN Center for Public Health Emergencies and Emerging Diseases, which was launched last year, and that Tokyo will continue to provide its full support for the facility.

Moon said South Korea has vowed to allocate $5 million this year to the COVID-19 ASEAN Response Fund to facilitate vaccine supplies to the region.

Li said China has offered COVID-19 vaccines and medical supplies necessary to respond to the coronavirus and called for the further strengthening of long-term cooperation with ASEAN while taking measures to contain the pandemic.

Kishida attended the ASEAN-related summits amid campaigning for Japan's general election on Oct. 31.