The naval forces of the United States, Japan, Australia and India have started a joint exercise, Pentagon press secretary John Kirby said Tuesday, in the face of China's maritime assertiveness in the region.

The four nations, known as the "Quad," will hold the Malabar exercise until Thursday in the Bay of Bengal in the northeastern Indian Ocean, according to Japan Maritime Self-Defense Force. 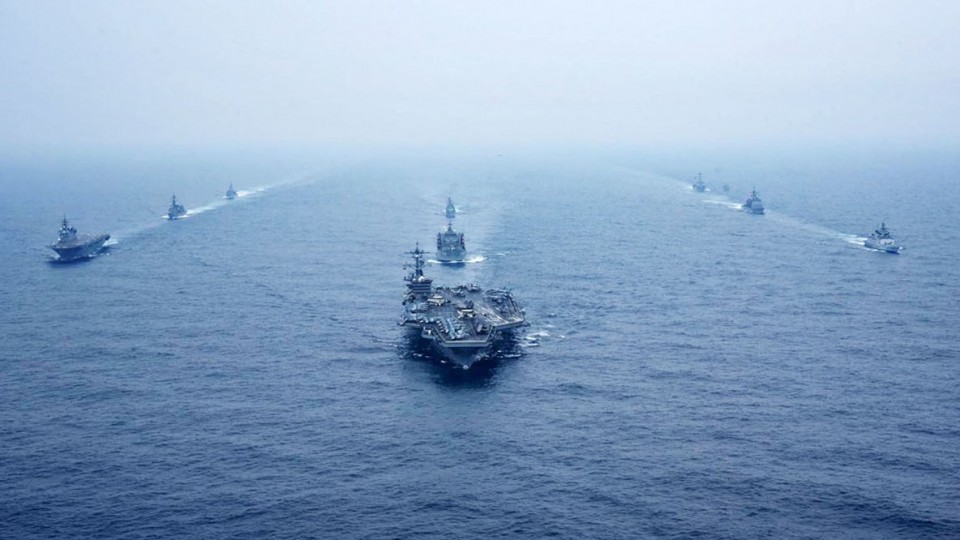 Supplied photo shows the Malabar joint exercise by the naval forces of the United States, Japan, Australia and India in the Bay of Bengal on Oct. 12, 2021. (Photo courtesy of the Indian Navy)(Kyodo)

The Quad nations are working together to realize a free and open Indo-Pacific region and counter China's growing economic and military clout. The four countries also held a joint drill in late August as they bolster security cooperation.

In a joint statement released after the leaders of the four nations met in September, they said, "Together, we recommit to promoting the free, open, rules-based order, rooted in international law and undaunted by coercion, to bolster security and prosperity in the Indo-Pacific and beyond."

In a press conference on Wednesday, Seiji Kihara, Japan's deputy chief Cabinet secretary, said, "I would like these exercises to lead to strengthening ties with the United States, India and Australia that share a vision for a free and open Indo-Pacific."

The Malabar exercises started in 1992 as a bilateral drill involving the U.S. and Indian navies, with Japan joining in 2015. Australia returned to the exercises in 2020 after last participating in 2007.