Loosehead prop Keita Inagaki and hooker Atsushi Sakate will pack down at the front of a Japanese scrum featuring several 2019 Rugby World Cup standouts in Saturday's test match against Australia.

They will be joined by new captain Pieter "Lappies" Labuschagne and New Zealand Super Rugby rookie of the year Kazuki Himeno in a Brave Blossoms side seeking a first-ever win against the Wallabies, at Oita's Showa Denko Dome.

The Japan Rugby Football Union on Thursday named its 23-man squad for the match, which will be the first international test in Japan since the World Cup two year ago. 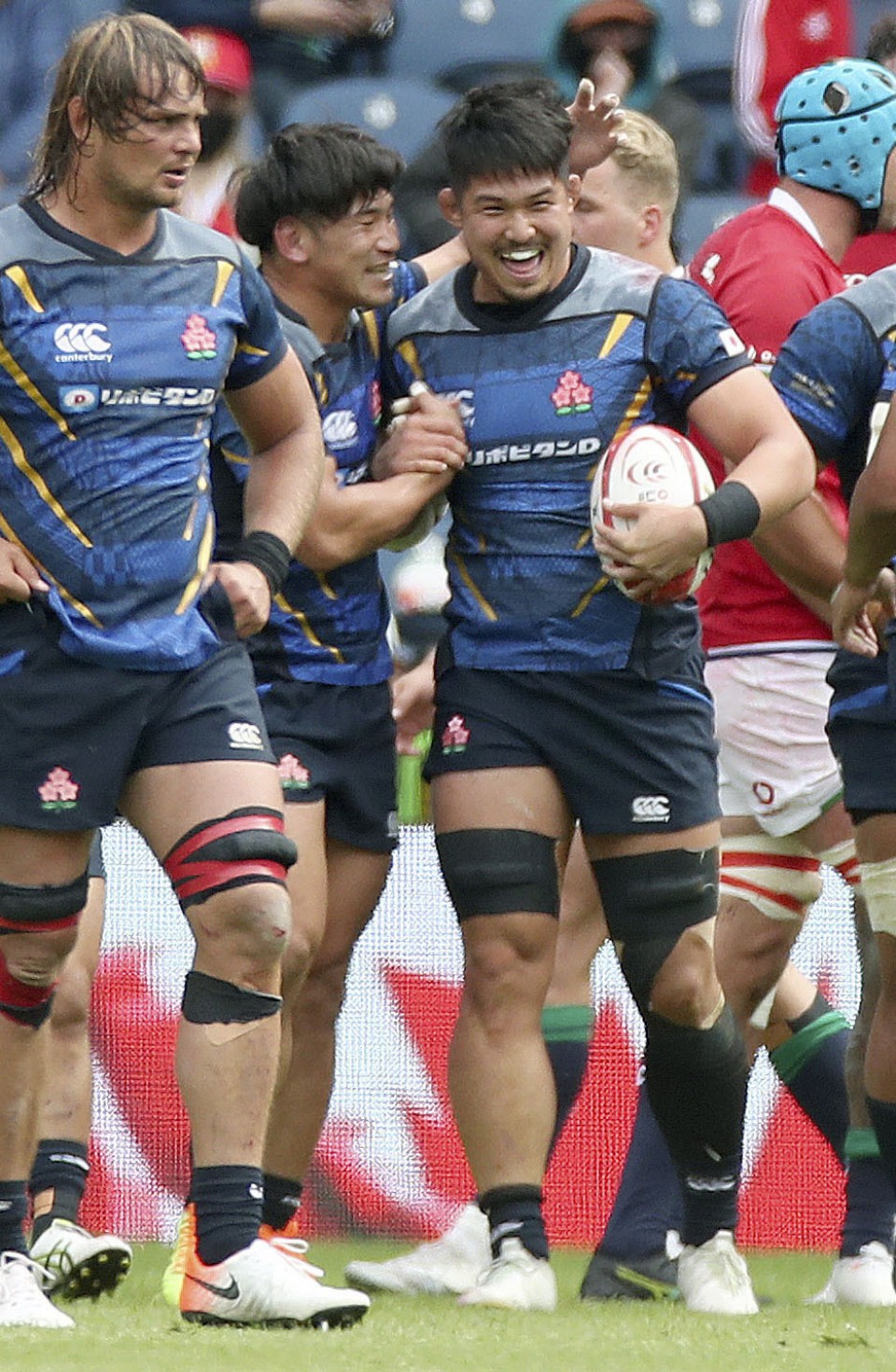 Kazuki Himeno of Japan (R) celebrates after scoring a try against the British and Irish Lions in Edinburgh, Scotland on June 26, 2021. (Kyodo)

The Japan pack will also have Australian-born lock Jack Cornelsen, the son of a former Wallaby, making his first start for the Brave Blossoms after coming off the bench during the summer against the British and Irish Lions and Ireland. Flanker Ben Gunter, who grew up in Australia, will be earning his first cap.

Back-row forward Michael Leitch, who captained Japan to a historic World Cup quarterfinal berth on home soil, will start the match on the bench along with playmaker Yu Tamura, another key player from the 2019 tournament.

Joining them on the bench will be another former Australian youth talent, center Dylan Riley, who could earn his first cap for Japan.

Japan head coach Jamie Joseph will be up against an old foe in Wallabies mentor David Rennie. The pair were formerly rival coaches of New Zealand-based Super Rugby sides the Highlanders and the Chiefs, respectively.

Rennie told the official Rugby Australia site he expects a fast-paced game against a Japanese pack whose main weapon is its speed.

"Japan have picked six (loose forwards) in their pack so we imagine it's going to be a reasonably quick game from their mindset, and so we've taken all that into account," he said.

One of three countries to win multiple World Cups -- along with New Zealand and South Africa -- two-time champions Australia will also face Scotland, England and Wales on their Northern Hemisphere tour.

After facing Australia, Japan will also head to Europe to play Ireland on Nov. 6, Portugal on Nov. 13 and Scotland on Nov. 20.