Leaders of the Association of Southeast Asian Nations will continue to press Myanmar to allow the group's special envoy to visit the country to try to mediate among the feuding parties, according to a draft of a chairman's statement to be issued at this week's ASEAN Summit.

The draft seen by Kyodo News implicitly calls on the junta to implement its commitment to a five-point consensus agreed by ASEAN leaders in April to help find a solution to the country's political crisis, "including by facilitating the visit of the Special Envoy to Myanmar to build trust and confidence with full access to all parties concerned." 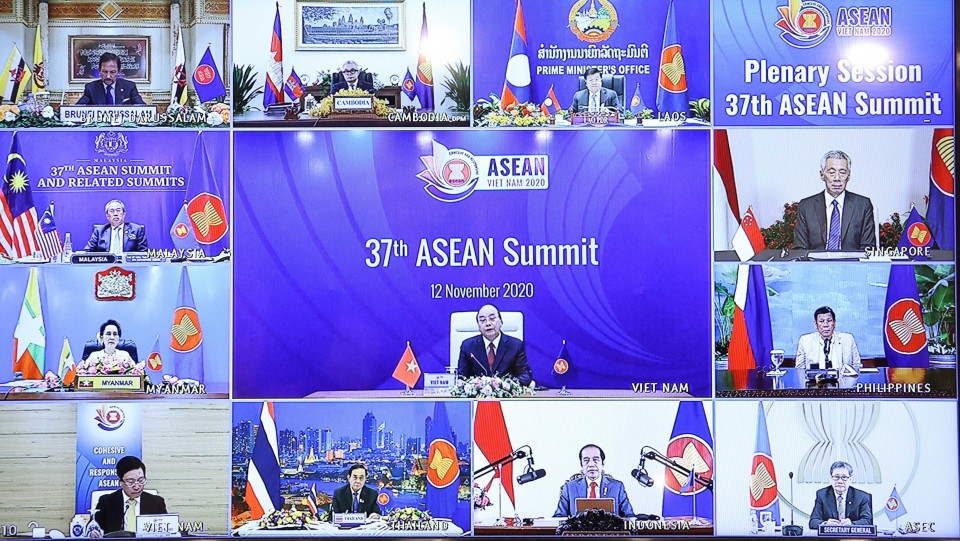 The Association of Southeast Asian Nations annual summit is held via videoconference on Nov. 12, 2020. (VNA/Kyodo)

The reference is to Brunei's second foreign minister, Erywan Yusof, whose visit has not yet been approved by the junta due to his insistence on meeting with "some specific individuals," presumably ousted civilian leader Aung San Suu Kyi and other opposition figures.

ASEAN leaders will meet via videoconference Tuesday through Thursday without junta leader Senior Gen. Min Aung Hlaing, whose exclusion was recently agreed at an emergency meeting of ASEAN foreign ministers due to the junta's lack of cooperation with ASEAN in implementing the five-point consensus.

An ASEAN diplomatic source clarified that since it was decided at the Oct. 15 meeting to allow only a "non-political representative" from Myanmar to attend the summit, the junta-appointed foreign minister, Wunna Maung Lwin, should also not represent the country.

"So it must be a civil servant, not a minister or anyone holding a political post," the source said.

The five-point consensus calls for the immediate cessation of violence in Myanmar and restraint among the parties, constructive dialogue to seek a peaceful solution, the appointment of a special envoy of the ASEAN chair to facilitate mediation, provision of humanitarian aid, and for the special envoy and delegation to visit Myanmar to meet with all sides.

A big reason why Myanmar's top general was not invited to the summit was because the National Unity Government set up by opponents of army rule also formally requested representation at the summit.

"We wish to claim our rightful seats at the summits alongside our ASEAN counterparts," it said in a letter sent to nine ASEAN foreign ministers, a copy of which was seen by Kyodo News.

"Further we trust that the catastrophic situation our people are facing be a critical agenda item of the summits of highest priority," said the letter signed by Zin Mar Aung, the shadow government's acting foreign minister.

The ASEAN source said the 10-member grouping "cannot interfere in the internal affairs (of Myanmar) when the country is facing an internal problem of who is legitimate."

The junta has told Erywan not to contact the underground government.

According to a report he presented at the emergency meeting, which has been circulated among ASEAN foreign ministries, the special envoy was "warned against recognising, communicating or engaging with entities declared 'unlawful and terrorist groups' including individuals undergoing legal proceedings on trial for various charges."

The ASEAN source confirmed that there are plans for Erywan to continue efforts to negotiate with the junta after the summit.