Astronaut Koichi Wakata will embark on his fifth space mission, a space travel record for a Japanese astronaut, aboard a new SpaceX ship in the fall of 2022 or later, Japan's space agency said Tuesday.

The 58-year-old astronaut will board the fifth operational Crew Dragon developed by U.S. company Space Exploration Technologies Corp. and stay at the International Space Station for a long period of time, the Japan Aerospace Exploration Agency said. 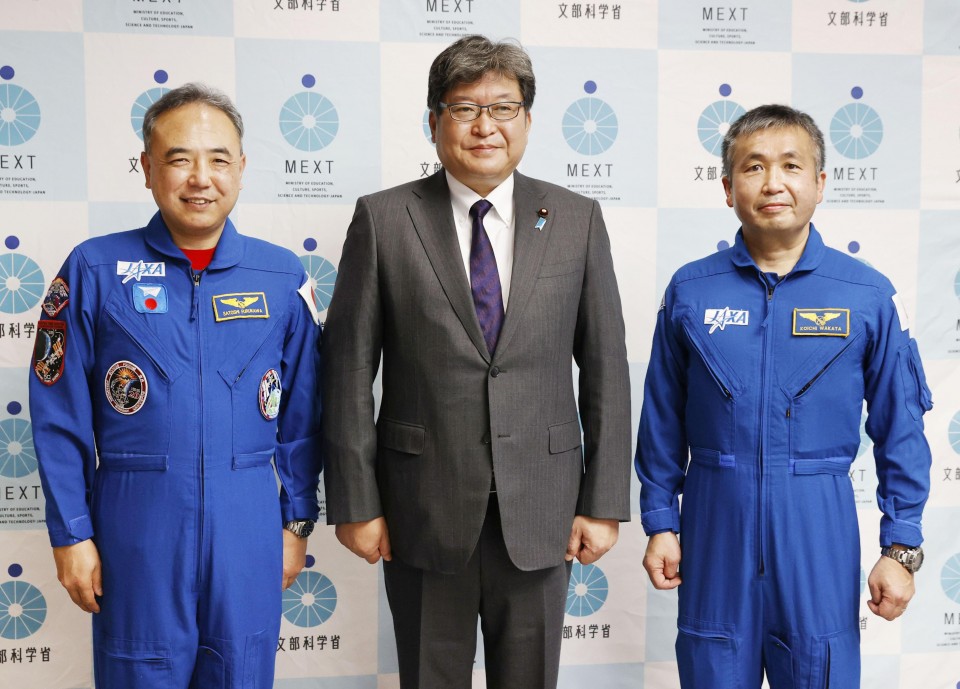 Japanese astronauts Koichi Wakata (R) and Satoshi Furukawa (L) pose for a photo with Koichi Hagiuda, Japan's minister of education, culture, sports, science and technology at the time, during their visit to the ministry in Tokyo on Dec. 15, 2020. (Kyodo)

"This coming flight is going to be my first flight on board a commercial space vehicle. I recognize remarkable developments in the space field and acknowledge dynamic activities by the private sector on the Low Earth Orbit," Wakata said in a statement.

Wakata also said "it is an honor" for him to ride the new space vehicle for a third consecutive year for JAXA astronauts, following Soichi Noguchi, 56, and Akihiko Hoshide, 52, who were on board the first and second operational space vehicles, respectively.

SpaceX, founded by Tesla Inc. CEO Elon Musk, developed the Crew Dragon as the successor to the U.S. National Aeronautics and Space Administration's Space Shuttle transportation system that was in service for 30 years through 2011.

Satoshi Furukawa, 57, another Japanese astronaut, plans to stay at the ISS around 2023, according to JAXA.