Princess Mako met with her grandparents former Emperor Akihito and former Empress Michiko on Monday, a day before her controversy-hit marriage to her commoner boyfriend Kei Komuro.

The 30-year-old princess visited the couple for the first time in 19 months to bid farewell as she is set to register her marriage to Komuro, also 30, on Tuesday morning and leave the imperial household. Their marriage has drawn public controversy over a financial dispute involving Komuro's mother.

The princess, the first grandchild of the former emperor and empress, both 87, arrived at their temporary residence in Tokyo by car at around 10:20 a.m. She opened the window to wave at a throng of over 100 people who had gathered along the road. 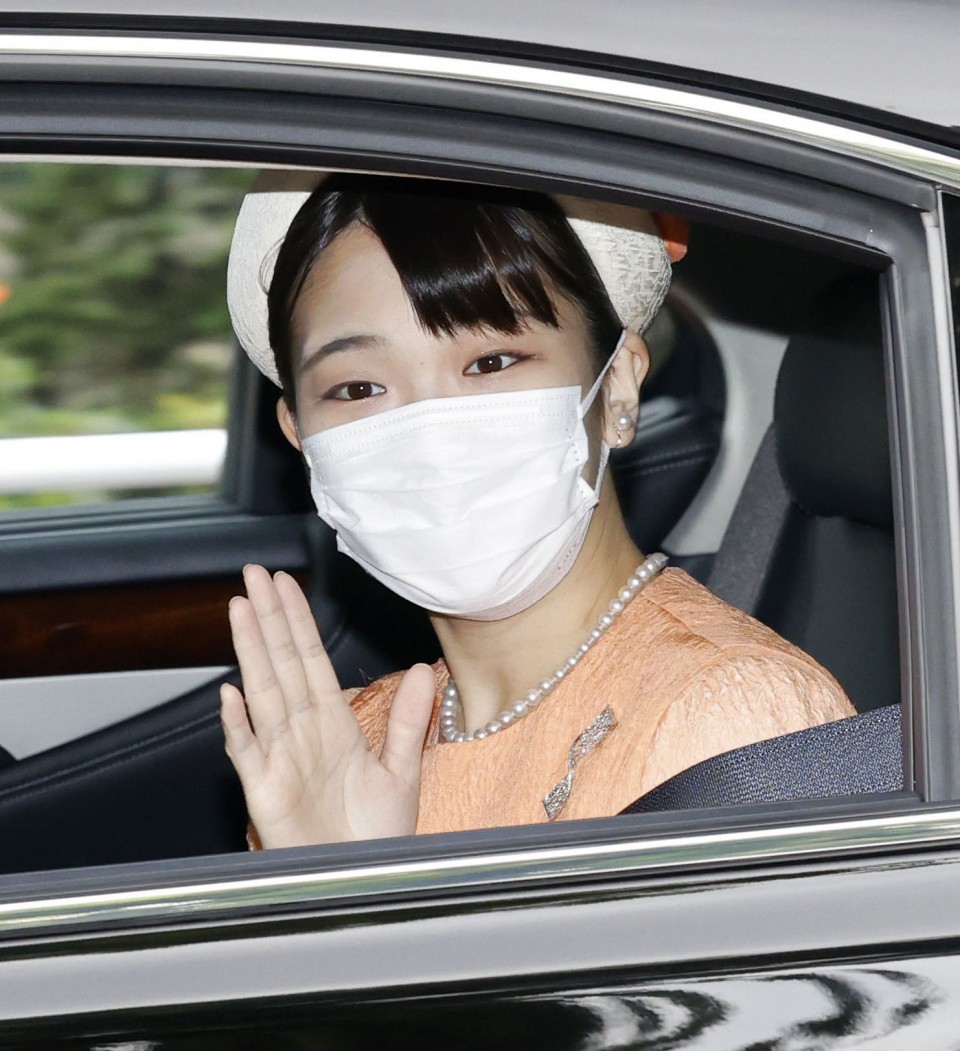 Japanese Princess Mako waves from inside a vehicle before entering the residence of former Emperor Akihito and Empress Michiko in Tokyo's Takanawa area on Oct. 25, 2021, a day before her marriage to Kei Komuro. (Kyodo) ==Kyodo

Former Empress Michiko had said on the occasion of her 87th birthday last Wednesday that she will miss the princess. The Imperial House Law stipulates that a female imperial member must abandon her title if she marries a commoner.

In a rare decision, traditional ceremonies associated with imperial family members' weddings will not be held in view of the controversy stemming from the money dispute between Komuro's mother and her former fiance.

In lieu of the rites, the princess met last Friday with Emperor Naruhito and his wife Empress Masako, and also visited places such as sanctuaries that enshrine the imperial family's ancestors.

After registering the marriage, the princess is expected to start a new life in New York, where Komuro works at a law firm.

One of the aides for the former emperor and empress said there is no doubt that the couple wishes for Princess Mako's happiness, as they look on the princess with affection.

Former Empress Michiko, in particular, has spoken fondly of Princess Mako, and in 1992, the year after Princess Mako was born, wrote about her hopes for her first grandchild in a waka poem.

When the princess was in the third grade at elementary school, she helped the former empress with silk-farming activities, an imperial tradition passed down to empresses since the late 19th century.

The former empress later wrote a letter to the princess, saying, "Grandma thought Mako-chan is very hardworking." "Chan" is a suffix in Japanese denoting endearment usually to a baby or young girl.

The former emperor and empress have been worried about Princess Mako, who has been diagnosed with complex post-traumatic stress disorder caused by what she described as psychological abuse the couple and their families received, according to their aide.

Since the revelation of the financial dispute over 4 million yen ($35,200), which includes money spent on Komuro's education, the princess and Komuro have often been subjected to derogatory comments on social media.

In 2019, the former emperor became the first Japanese monarch to abdicate in about two centuries, bringing to an end the 30-year Heisei Era. His eldest son Emperor Naruhito, 61, subsequently ascended the throne.