An elementary school in northeastern Japan opened on Sunday as a memorial to those impacted by the massive 2011 earthquake and tsunami disaster and subsequent Fukushima nuclear crisis, with its mission to pass on lessons learned from the tragedy.

Ukedo Elementary School, run by the town of Namie in Fukushima Prefecture, is the first memorial in the prefecture that preserves buildings in their damaged state.

The two-story school is 5 kilometers north of the Fukushima Daiichi nuclear power plant that suffered meltdowns and released radioactive materials after the March 11, 2011 disaster. People across the region were forced to evacuate, some for years, and many have not returned. 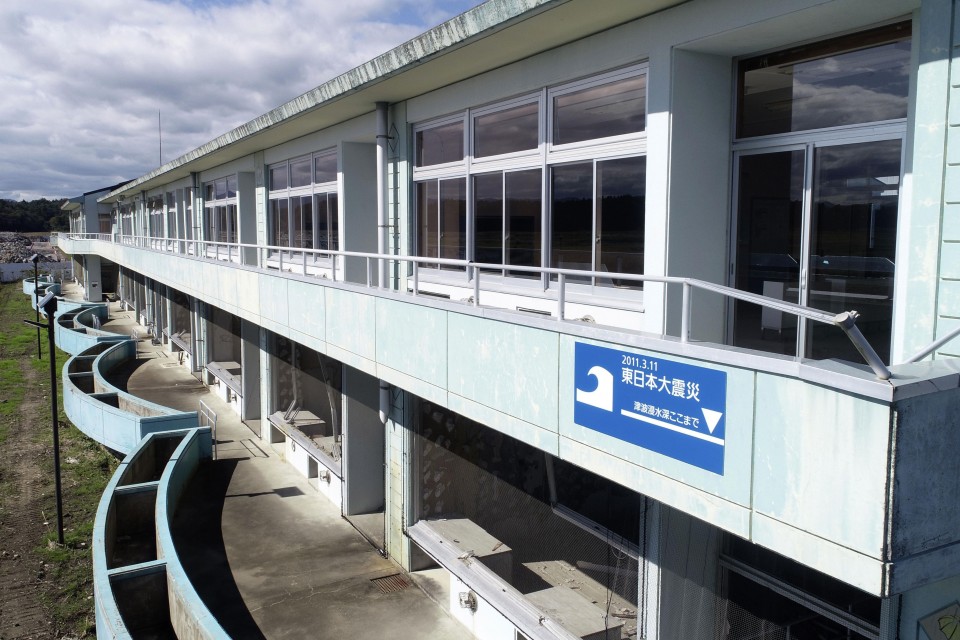 Photo taken from a drone shows the Ukedo Elementary School, run by the town of Namie in Fukushima Prefecture, on Oct. 18, 2021. A plate showing the height of the 2011 tsunami is placed on the school building. (Kyodo)

Located 300 meters from the coast, the municipal school was hit by a 15-meter-high tsunami. A total of 95 students, teachers and employees who were at the school when the quake struck survived after fleeing to higher ground.

In the wake of the Fukushima crisis, Namie was subject to a government evacuation order for six years. The school never reopened.

Mayor Kazuhiro Yoshida said in a ceremony marking the opening of the memorial that he hopes the school will be a "place to remind people about being prepared for disaster."

Wakana Yokoyama, who was a sixth-grader at the time, said she is happy to see her school, in whatever form, still exists. "While serving as a memorial museum, I hope it can also be a reason for residents to return," said Yokoyama, 23.

Visitors to the school can tour buildings to see damaged walls and items left in the wake of the disaster, such as a clock stopped at 3:37 p.m., the exact time when the tsunami struck.

Survivor stories are retold in exhibits, including the harrowing memories of those who had to give up the search for the missing because of the need to flee the nuclear fallout. Locals were forced to evacuate from their homes for an extended period.

In the Ukedo district, 127 people died in the tsunami and 27 remain missing, assumed dead.

Due to the evacuation order, the search for the missing only began in earnest about a month after the catastrophe struck.