Japan is considering exempting Australian soldiers from the death penalty for crimes committed during joint drills on its soil after the issue of capital punishment stalled negotiations for a defense cooperation pact between the two countries, government sources said Saturday.

Australia, which abolished the death penalty in 1985, has been concerned that its defense personnel could be sentenced to death over crimes committed in Japan, according to the sources. 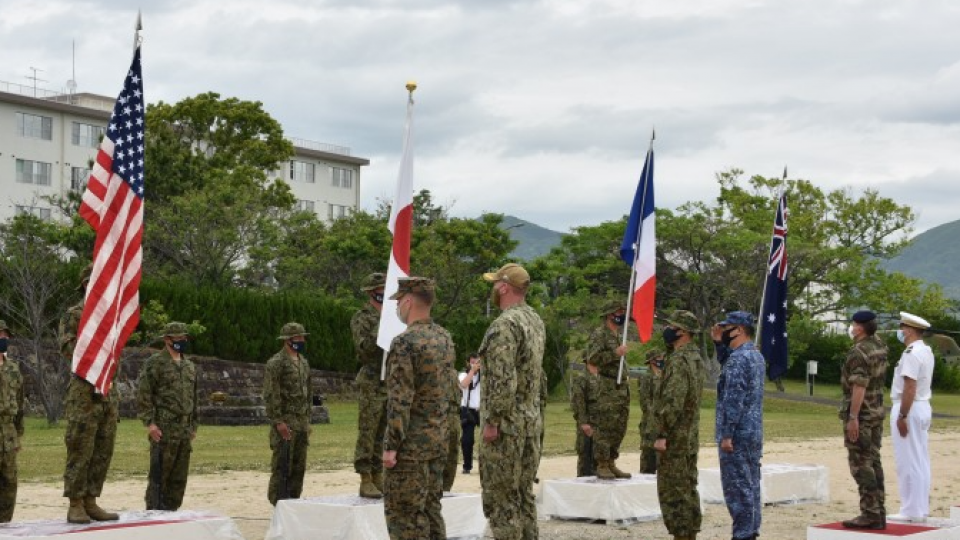 Forces from Japan, United States, France and Australia attend an opening ceremony of a joint drill in Ground Self-Defense Force Camp Ainoura in Nagasaki Prefecture on May 11, 2021. (Photo courtesy of Defense Ministry)(Kyodo)

Tokyo and Canberra are coordinating to have their respective countries maintain jurisdiction of their troops only when holding joint exercises and other operations, meaning when troops are off duty, they would come under the jurisdiction of the host country.

According to Amnesty International, 108 nations have outlawed the death penalty for all crimes as of the end of 2020, while 144, or more than two-thirds of the world's countries, have abolished it in law or practice. Japan and the United States are among the countries that maintain the death penalty.

Last year, Japan and Australia agreed in principle on the pact, formally called the Reciprocal Access Agreement, which would streamline administrative procedures for Japan's Self-Defense Forces and the Australian military to stay in each other's country for joint exercises and disaster relief missions, as well as determine legal jurisdiction for any crimes committed by visiting troops.

If the two countries reach an agreement, a bill on the pact could go before Japan's parliament during its ordinary session next year.

Japan has been strengthening its defense cooperation with the United States, India and Australia under the quadrilateral framework amid China's maritime assertiveness in the region.

Tokyo and Canberra agreed in 2014 to start discussions on an agreement. In November last year, then Japanese Prime Minister Yoshihide Suga and his Australian counterpart Scott Morrison agreed on the pact in principle.

Japan started negotiations with Britain on drawing a similar pact this month.