Although businesses got the go-ahead to ease coronavirus restrictions when the Japanese government fully lifted its state of emergency on Friday, experts are still unsure why infection numbers have receded from their peak, bringing concern a resurgence may follow.

After a year and half of on-again, off-again measures, such as requesting that people refrain from nonessential outings, Japan has seemingly turned a corner on its path back to normalcy. Soon the nation could do away with restrictions on social and economic activities altogether.

But it remains to be seen how the government might implement its next steps on a nationwide scale, such as requiring vaccine certificates to verify people's inoculation status at stadiums for large events. Other issues, like how children who are not old enough to receive a vaccination will be able to return to normal life, also remain outstanding. 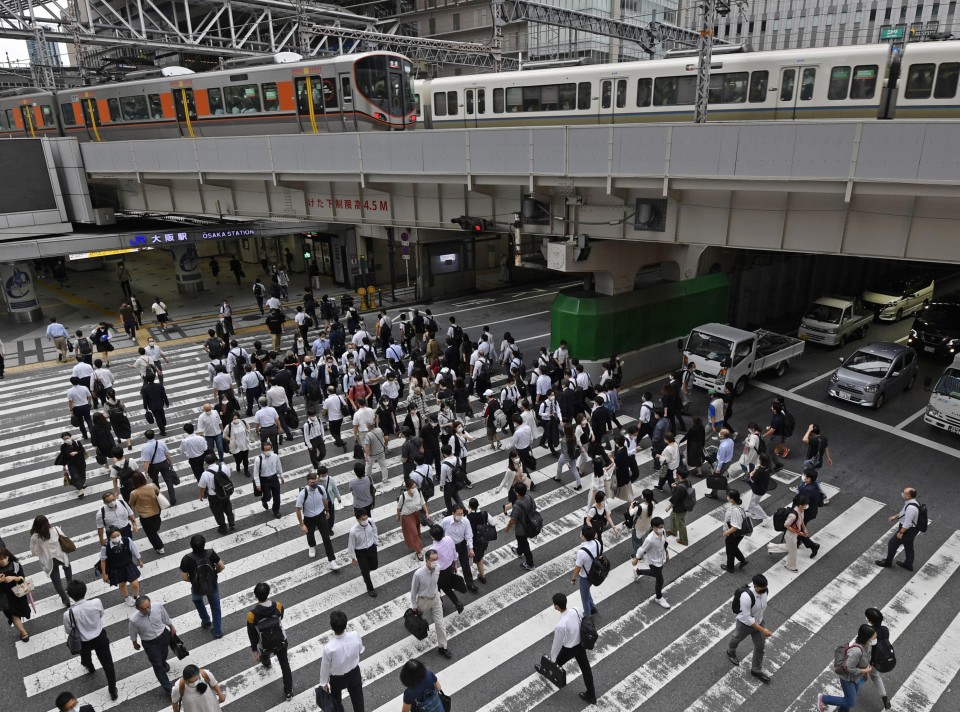 People walk in front of JR Osaka Station in Osaka on Oct. 1, 2021. Japan's COVID-19 state of emergency covering Osaka and 18 other prefectures and quasi-state of emergency in other areas were fully lifted the same day as infections fall from their peak. (Kyodo) ==Kyodo

Friday marked the first time since April that none of the country's 47 prefectures were subject to measures aimed at curbing infections.

On Tuesday, the government formally decided to lift the state of emergency covering Tokyo and 18 other prefectures, the catalyst for relaxing restrictions being a sharp decline in infections. Government officials and infectious disease experts, however, are still scratching their heads about the decision.

That day, health minister Norihisa Tamura said, "There is no reason to say with certainty" what is causing the drop in infections, while others spoke more to the point, such as Kazuhiro Tateda, a professor in the medical department at Toho University, who admitted, "We don't know why infections are declining."

On Friday, Japan also started to ease quarantine rules for travelers from abroad who have been fully vaccinated, reducing the required period of self-isolation after arrival from 14 days to 10.

But concerning possible future waves of infections, Atsuo Hamada, a specially-appointed professor in travel medicine at Tokyo Medical University Hospital, has said, based on the situation in other countries, "We cannot avoid a 'sixth wave' coming between November and December."

However, he said the progress in vaccinations in Japan means "we will be able to have better control of the situation than we did with the fifth wave."

Under the state of emergency, the government urged people to stay at home and avoid going to crowded places. It also requested restaurants and bars to close by 8 p.m. and refrain from serving alcohol, with mixed results.

The government has indicated that for about one month, it will permit restaurants and other dining establishments to serve alcohol in Tokyo and other prefectures until 8 p.m. and remain open until 9 p.m. as long as they take anti-virus measures. Elimination of all regulations is expected in the months to come if infections settle down further.

Even afterward, if the government declares another emergency because of a resurgence of infections, it says it will not reinstate uniform restrictions since the vaccinations rates will be so high.

The thinking is that by implementing a system of "vaccine test packages," which require people to have vaccination certificates or produce negative COVID-19 results, it will be possible for businesses to serve alcohol under a restaurant certification system.

Concerning the easing in stages of restrictions, a member of a government subcommittee said, "We are at the starting line. After evaluating the situation, we would like to return (to normal), little by little."

For outgoing Prime Minister Yoshihide Suga, who appeared set on lifting the state of emergency before he handed over the reins to his successor, the exit strategy acted as his parting gift, but he left the heavy lifting to Fumio Kishida, who on Monday is poised to be elected Japan's next prime minister.

Kishida's incoming administration will be tasked with taking the concrete measures of designing a system, including establishing vaccination certificates, for easing restrictions of activities.

Ahead of being elected the new leader of the ruling Liberal Democratic Party, Kishida, the former chairman of the Policy Research Council, said he envisions a further easing of restrictions around November when more people have been fully vaccinated. He, too, expressed doubt about the situation being under control anytime soon.

"The virus is repeatedly mutating. We have to think about the worst-case scenario," said Kishida, who has indicated that a full easing of restrictions might not be possible until next spring.

For restaurant chains, bars and owners of other eateries for which the path to a return to business as usual has finally opened up, expectations are high that there will be "no turning back from an easing of the restrictions."

Starting this month, the government plans to conduct trials in various parts of the country to verify the effectiveness of measures such as vaccination certificates. Still, event organizers point out many operational hurdles, such as preventing the forging of vaccine documents and determining how to allow unvaccinated children to attend large-scale events, remain.

Takeo Nakanishi, chairman of the All Japan Concert & Live Entertainment Promoters Conference, thinks Japan needs to devise ways of finding a middle ground if vaccines are mandated for people to attend sporting events and concerts.

"It can't be done the same as in Europe and the United States," he said. "Japan needs to search for its own solutions and find ways of compromising," he said.