Shohei Ohtani had an RBI triple and a double as he went 2-for-5 Thursday in the Los Angeles Angels' 7-6 defeat against the Texas Rangers, getting multiple hits for the second straight game.

However for the eighth straight outing, the two-way star was unable to add to his 45 home runs for the season. Salvador Perez of the Kansas City Royals leads the majors with 48 homers, followed by Vladimir Guerrero of the Toronto Blue Jays with 46. 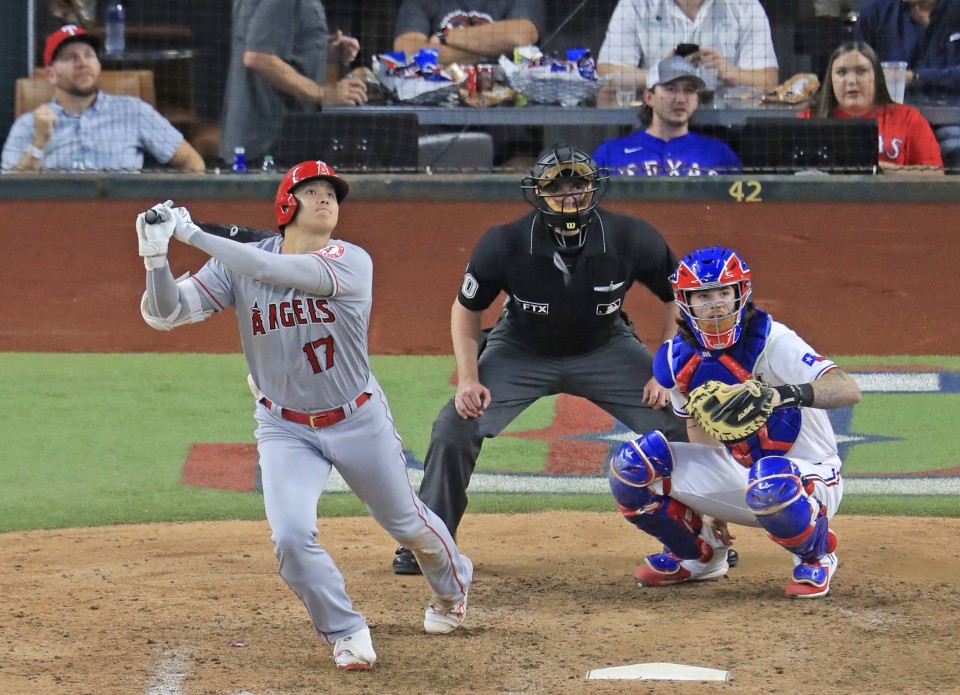 Shohei Ohtani of the Los Angeles Angels bats against the Texas Rangers in Arlington, Texas, on Sept. 30, 2021. (Kyodo)

Batting second as the designated hitter, Ohtani lined a triple to right off Glenn Otto to drive in the game's opening run, his 99th RBI of the season, in the Angels' five-run first inning before doubling to left in the sixth.

Ohtani is now tied for the lead in the big leagues with eight triples as he became the first player in history to get 45 homers, eight triples, 25 doubles and 25 stolen bases in a year.

Ohtani came close to ending his home-run drought in the ninth, but an opposite-field fly to left fell just short of the wall at Globe Life Field.

The season is over for Yu Darvish, meanwhile, after the San Diego Padres placed him on the 10-day injured list with a left hip impingement.

In his first season at the club after moving from the Chicago Cubs, Darvish pitched on Opening Day but struggled badly after suffering a left hip inflammation in July that saw him miss the All-Star game despite getting picked.

The right-hander lost seven straight decisions for the first time in 10 big-league seasons through early September. He ends the season after pitching in 30 games, going 8-11 with a 4.22 ERA.