Japan's Princess Mako visited the graves of her great-grandparents in Tokyo on Tuesday to offer prayers ahead of her controversy-hit marriage to boyfriend Kei Komuro later this month.

The visit was made at the request of the 29-year-old princess, a niece of Emperor Naruhito, who is set to go ahead with the marriage that was imperiled by a financial dispute involving Komuro's mother. 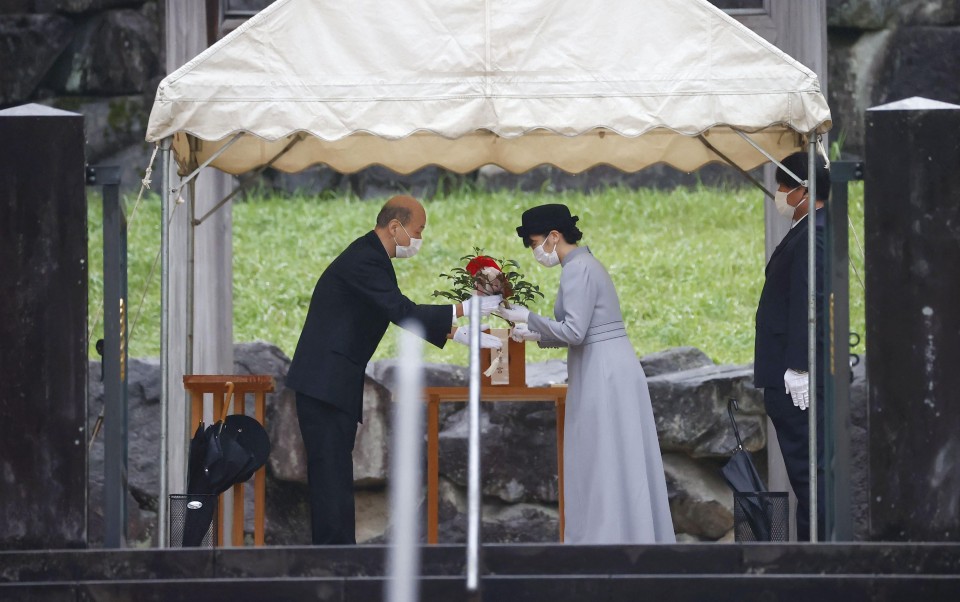 Japanese Princess Mako visits the mausoleum of Emperor Showa in Hachioji, western Tokyo, on Oct. 12, 2021, ahead of her Oct. 26 marriage with boyfriend Kei Komuro. (Kyodo) ==Kyodo

Princess Mako will skip the traditional wedding rites, the first time a female member of the royal family has done so in postwar Japan. Under the current rules, women lose their royal status once they marry a commoner. 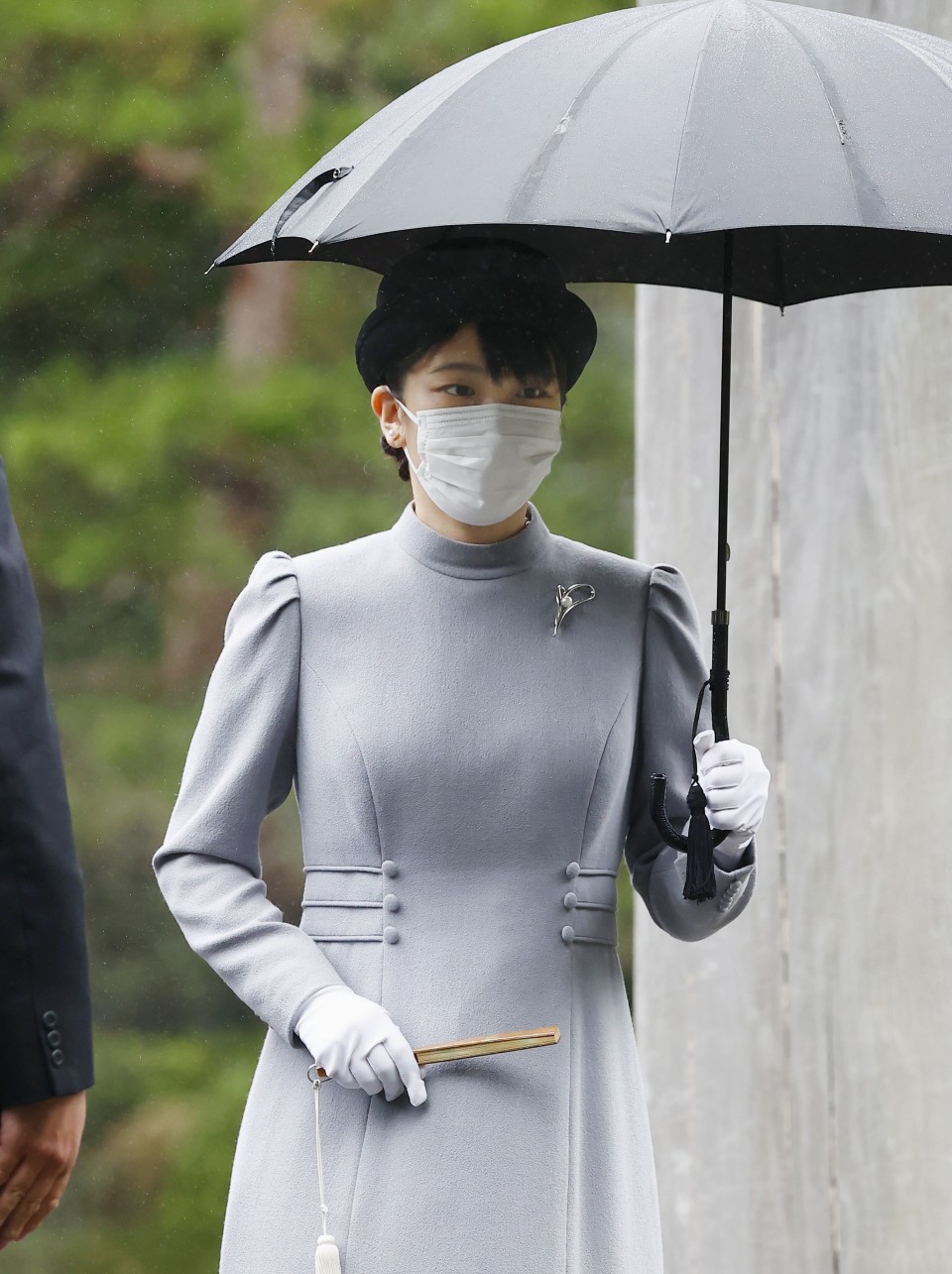 Japanese Princess Mako is pictured after visiting the mausoleum of Empress Kojun, wife of Emperor Showa, in Hachioji, western Tokyo, on Oct. 12, 2021. (Kyodo)

Wearing a gray dress and a white face mask on a rainy day in the Japanese capital, Princess Mako bowed deeply in front of the mausoleums of Emperor Showa and his wife Empress Kojun and bowed to the press before leaving the site.

About 100 people gathered at the entrance of the Musashino Imperial Graveyard in Tokyo's Hachioji city to catch a glimpse of the princess, who will be leaving the imperial household upon marrying Komuro on Oct. 26.

As Komuro, who arrived in Japan last month from the United States, completed a two-week coronavirus quarantine period Monday, he and the princess are expected to start preparing for the marriage registration. Komuro works at a law firm in New York. 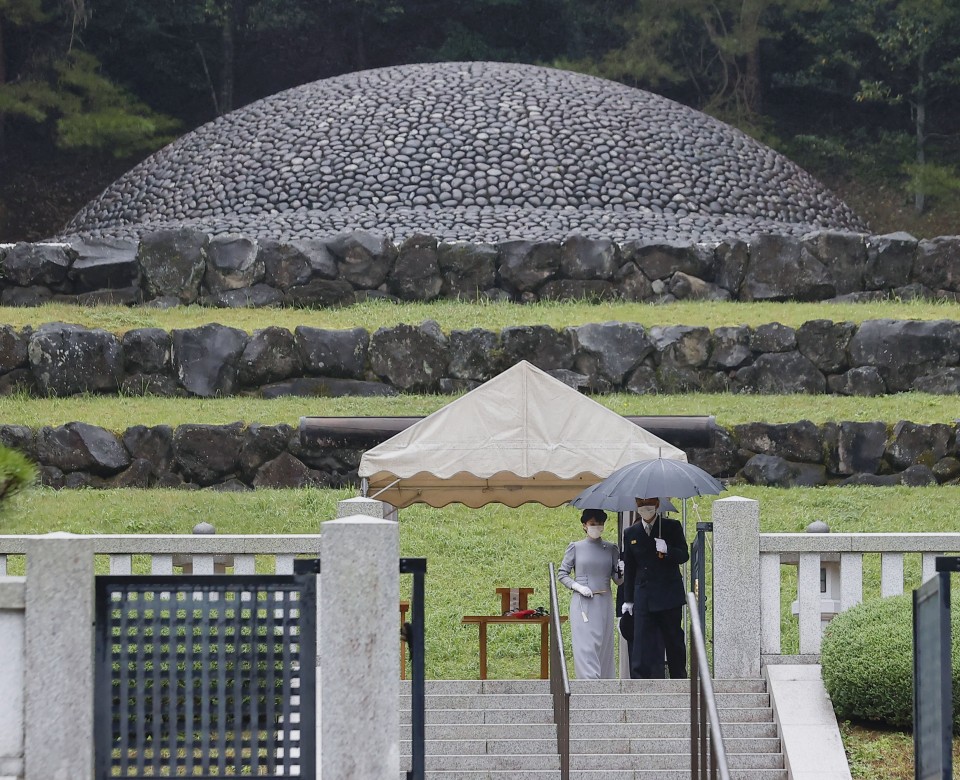 Japanese Princess Mako (L) is pictured after visiting the mausoleum of Empress Kojun in Hachioji, western Tokyo, on Oct. 12, 2021. (Kyodo)

Due to public concern about the Komuro family's financial dispute, which led many to oppose the couple's marriage, the Imperial Household Agency said the traditional ceremonies associated with royal family members' weddings would not be held.

The rites include the official engagement ceremony called "Nosai no Gi" and "Choken no Gi," an official meeting with the emperor and empress prior to marriage.

In lieu of the ceremonies, the princess will meet alone with Emperor Naruhito and Empress Masako. The eldest daughter of Crown Prince Fumihito also plans to meet with her grandparents -- former Emperor Akihito and former Empress Michiko -- before the marriage.

The agency also said it has accepted Princess Mako's unprecedented request that she not receive a sum of money usually given to female imperial family members upon leaving the household. The payment, which is normally up to around 150 million yen ($1.3 million), comes from taxpayers and is ostensibly made to allow former royals to maintain their dignity upon leaving the family.

Earlier this month, the agency officially announced the princess is scheduled to submit legal papers to register the couple's marriage on Oct. 26 and hold a joint press conference with Komuro later that day. The two are expected to start a new life in the United States.

The agency also revealed the princess has been diagnosed with complex post-traumatic stress disorder caused by what she described as psychological abuse the couple and their families received.

Their wedding was initially scheduled to take place on Nov. 4, 2018, but the agency announced in February the same year the postponement of ritual ceremonies following reports about the financial dispute between Komuro's mother and her former fiance.

The former fiance claims he provided Komuro's mother over 4 million yen in financial support, including the money she spent on Komuro's education.

He expressed hope in a statement Sunday that the trouble will be resolved soon, saying negotiations have been held with the Komuro family and that Komuro's lawyer has said his client intends to talk with the former fiance instead of his mother, who has been sick.

Komuro has said he and his mother believe the money they received was a gift, but he has proposed making a settlement payment to the former fiance.