Japanese men are increasingly deciding that sitting on the toilet while urinating is the way to go instead of standing where their aim is less accurate or they inadvertently cause a mess due to unintended "splashbacks."

A June poll found that just over 60 percent of men prefer to sit, with nearly half having made the switch from standing but over a quarter of men in their 20s saying they had from their earliest recollection always been "native toilet sitters."

The online survey by Japanese toiletries manufacturer Lion Corp. collected answers from 1,500 men aged 20 to 60 and found that a total of 60.9 percent of men prefer to sit. 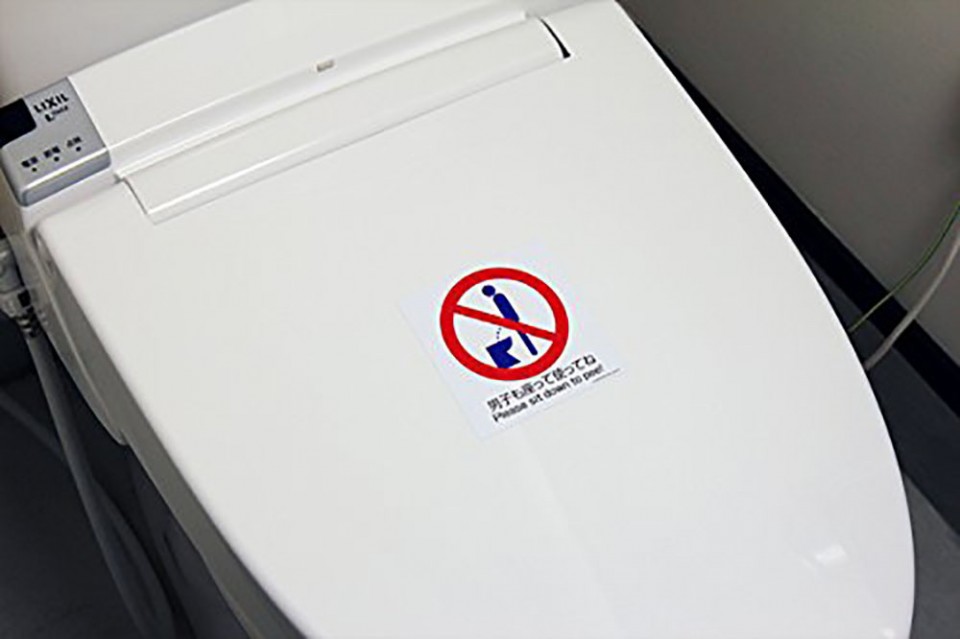 Photo shows a sticker on a toilet instructing men to "please sit down to pee!" (Photo courtesy of Tech Tech)(Kyodo)

The survey covered only postures for urinating at sit-down toilets and did not consider situations where urinals are also available.

Of the men who sit, 49 percent of respondents said they had switched from standing to sitting, while 11.9 percent of the total said they were "native" sitters.

Of the latter, only 2.7 percent were men in their 60s, compared with 25.7 percent who were young adults in their 20s.

The most common reason for those who made the switch was witnessing the mess they made, with 37.3 percent saying they had seen the ill effects of urine splashbacks with their own eyes.

Other reasons were consideration for others who clean the toilet, at 27.9 percent, because they began cleaning the toilet themselves, at 19.3 percent, or because someone close to them had convinced them that their urine spray -- mainly unseen to the naked eye -- is a real issue, at 16.6 percent.

Lion even conducted an experiment using ultraviolet light that revealed that splashbacks occurred on the inside rims of toilets and under seats even when a person sits to urinate, although peeing standing up by men results in splashes outside the field of play -- a violation usually involving sprinkles on the floor or adjacent walls.

Tomoyuki Isowa, a 53-year-old business owner in Nagakute, in central Japan's Aichi Prefecture, recently began taking a seat to relieve himself after years of standing. The change came after his son requested that he sit to pee when he visited the son's home. He was also persuaded by TV programs about men's bad urination habits.

"I was also being considerate of my wife, who always does the cleaning. And I learned that sitting down while I relieve myself allows me to relax more than standing," Isowa said. 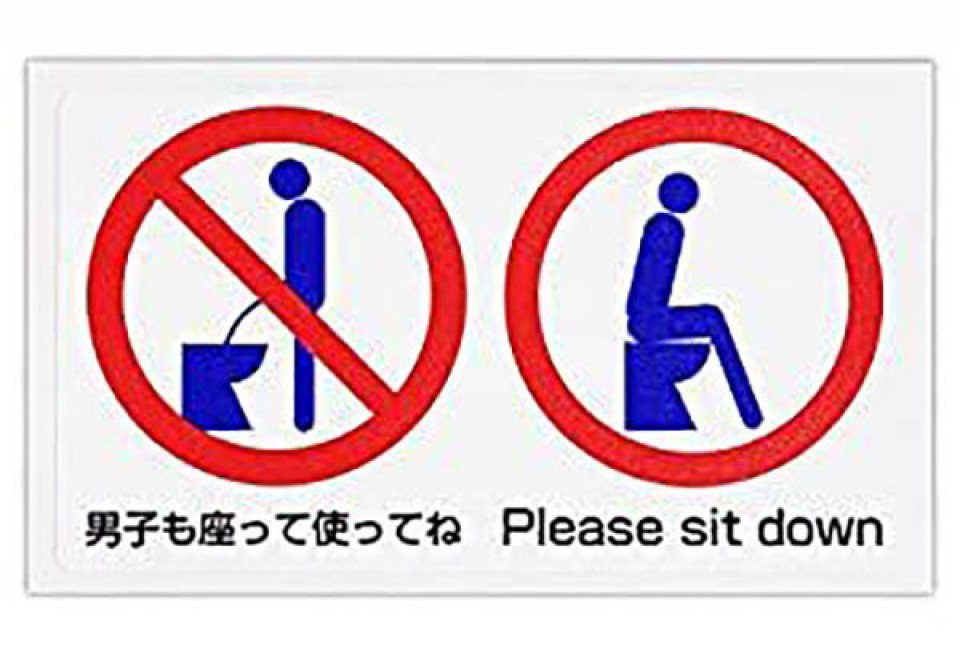 Photo shows an illustrative sticker instructing men in Japanese and English to sit down when urinating. (Photo courtesy of Tech Tech)(Kyodo)

Although advocates of "tachi-shon," a play on words in Japanese which is a combination of "tachi" (stand) and "shonben" (urine), argue "suwari-shon" (sit to pee) restricts urine flow, Isowa said he solves this by using toilet paper to make sure he wipes away any stubborn droplets after he is done.

And for those who wish to eliminate the trouble of messy toilet cleanups but find it hard to tell their male houseguests or family members to sit down when they urinate, businesses are introducing products that do the talking for them.

Since 2015, Aichi-based retail company Tech Tech has been selling illustrative stickers that instruct men to sit down when urinating. In addition to family households and restaurants, Tech Tech says it receives orders from men who live alone.

The sticker shows a figure standing and urinating into a toilet inside a circle with a line drawn diagonally through it and another circle next to it with a figure seated on the toilet as properly instructed in a caption written below. An English caption also reads, "Please sit down."

Some more inventive stickers proclaim that men who are popular with women are toilet sitters, protecting ladies from their displays of inaccuracy.

Marketing analyst Yohei Harada says increased awareness of good hygiene practices among parents influences boys from an early age such that they become more inclined to sit down when they pee as they grow into adulthood.

"The younger generation has a good relationship with their parents, so they tend to listen if they are told to keep a clean toilet," Harada said.

He also thinks today's young men being able to use their smartphones while peeing is a big plus.

"It's probably true that for young people who don't want to spend a moment away from their smartphones, sitting down on a toilet seat and being able to handle their phones easily is a bonus," he said.