The 41-year-old seven-time Japanese Golden Glove winner pitched one last time for the Seibu Lions, the Pacific League club where he started his career at age 18, at MetLife Dome on Tuesday night. 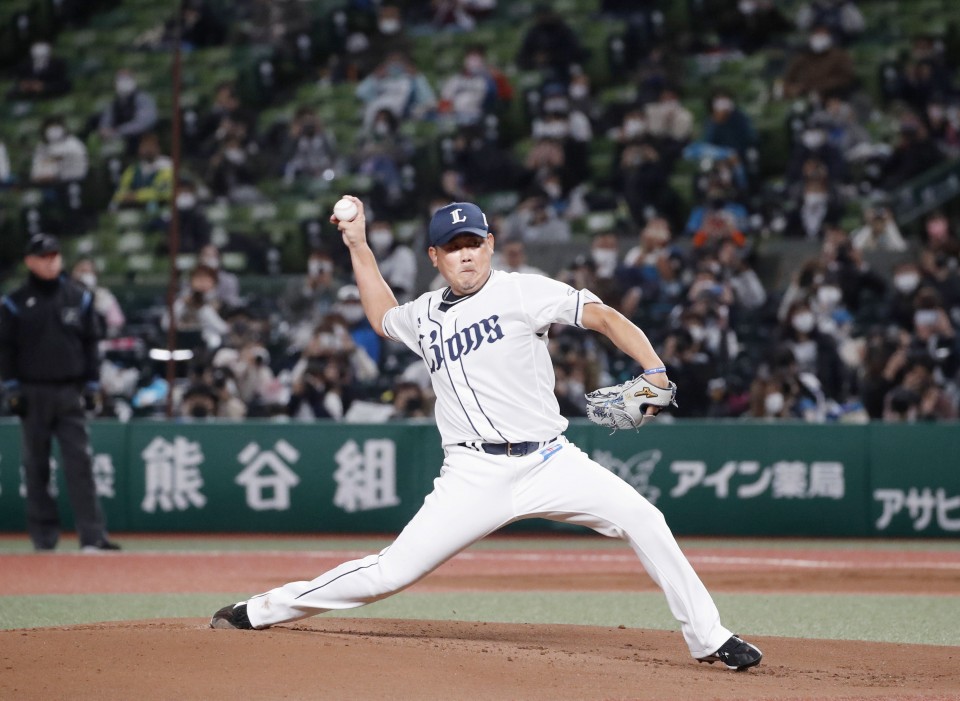 Daisuke Matsuzaka of the Seibu Lions pitches against the Nippon Ham Fighters in a Pacific League regular-season game at MetLife Dome in Tokorozawa, Japan, on Oct. 19, 2021. (Kyodo)

He took the mound against the Nippon Ham Fighters wearing No. 18, the "ace number" he wore in 1999 when he turned pro straight out of Yokohama High School.

Facing the Fighters' leadoff batter Kensuke Kondo, Matsuzaka threw a strike with his second pitch before issuing a walk on five pitches and making way for Ken Togame. He clocked 118 kilometers per hour with his fastest pitch of the night.

Matsuzaka became a top prospect in high school, leading his team to both the spring invitational and national summer championship in 1998, winning the latter with a no-hitter in the final.

After an outstanding initial run with the Saitama-based club from 1999 to 2006, Matsuzaka rose from teenage wunderkind to one of Japan's best pitchers. That led to his move to Major League Baseball and the Red Sox paying a $51 million posting fee to acquire his services from the Lions.

Matsuzaka announced his retirement on July 7 after failing to recover from a cervical spine surgery last year. Before he signed with Seibu for the 2020 season, he was with the Central League's Chunichi Dragons for two years and saw minimal action in 2019.

In discussing his decision to retire on Tuesday, Matsuzaka said he began setting things in motion after a bullpen session in late April, during which he nearly hit a batter in the head with a pitch.

Numbness in his right hand following the surgery had left him "scared of throwing balls," he said. "I thought to myself, 'I can't throw anymore. I have to quit.'" 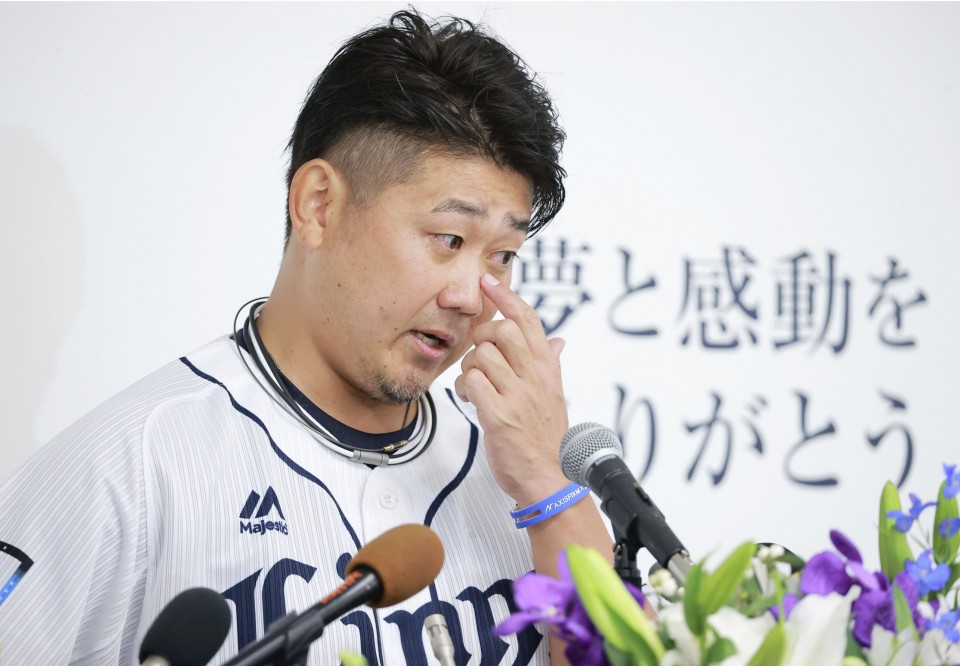 Former Boston Red Sox pitcher Daisuke Matsuzaka wipes away tears during a press conference in Tokorozawa, Japan, on Oct. 19, 2021, before taking the mound for the Seibu Lions in the final game of his career later in the day. (Pool photo) (Kyodo) ==Kyodo

Matsuzaka played for the Red Sox and New York Mets in his eight-year major league career before returning to Nippon Professional Baseball in 2015.

Matsuzaka, or "Dice-K" as he was affectionately called stateside, said more than half of his time playing professional baseball was spent dealing with injuries, but because of his first 10 healthy seasons, he was able to play into his forties.

"I want to thank my wife, my kids, my parents, everyone who was a part of my baseball life, even opposing fans who hated me," he said.

Across NPB and MLB, Matsuzaka has thrown over 2,200 innings and won 170 games.

His list of accolades includes his 2007 World Series ring with the Red Sox, the 2004 Japan Series title with the Lions, two World Baseball Classic titles for Japan, the 2001 Sawamura Award as NPB's best starting pitcher, seven NPB All-Star selections, and PL Rookie of the Year honors in 1999.

The Lions will hold a retirement ceremony for Matsuzaka on Dec. 4 at their home ground and online. 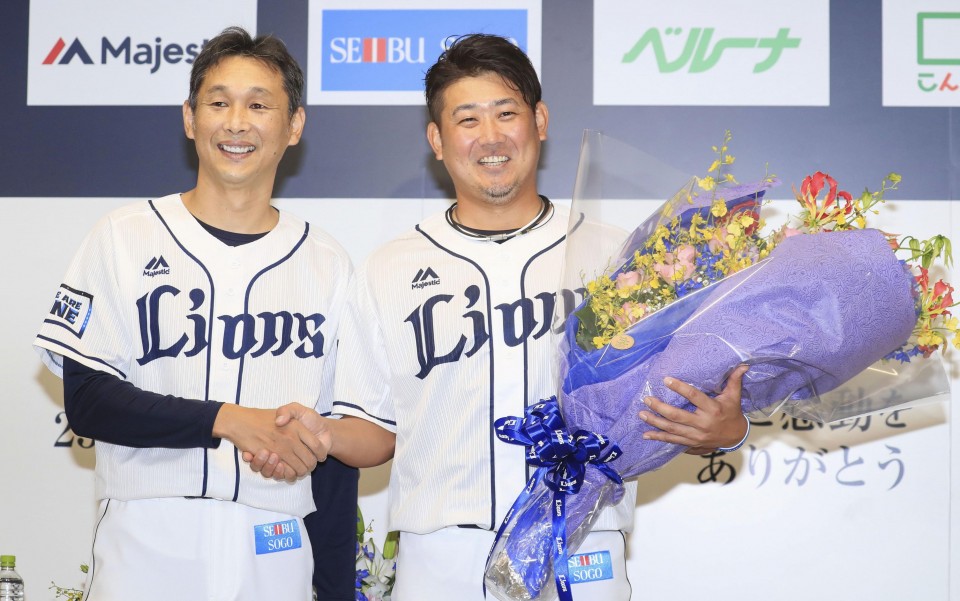 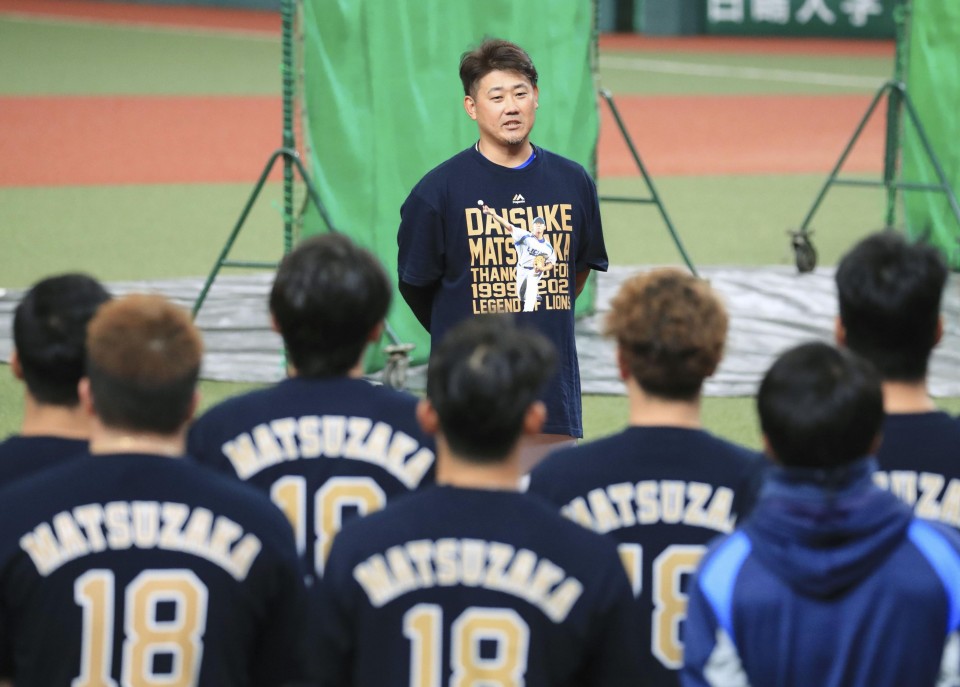 Former Boston Red Sox pitcher Daisuke Matsuzaka speaks to his Seibu Lions teammates at MetLife Dome in Tokorozawa, Japan, on Oct. 19, 2021, before taking the mound in the final game of his career later in the day. (Pool photo) (Kyodo) ==Kyodo