Japanese opposition party leaders expressed a mixture of determination and confusion on Monday after newly-elected Prime Minister Fumio Kishida launched a new government and now plans to go to the polls earlier than anticipated on Oct. 31.

Major opposition party leaders aim to scrutinize the newly appointed Cabinet, with an eye on any possible rebound in public support for the ruling Liberal Democratic Party heading into the House of Representatives election. 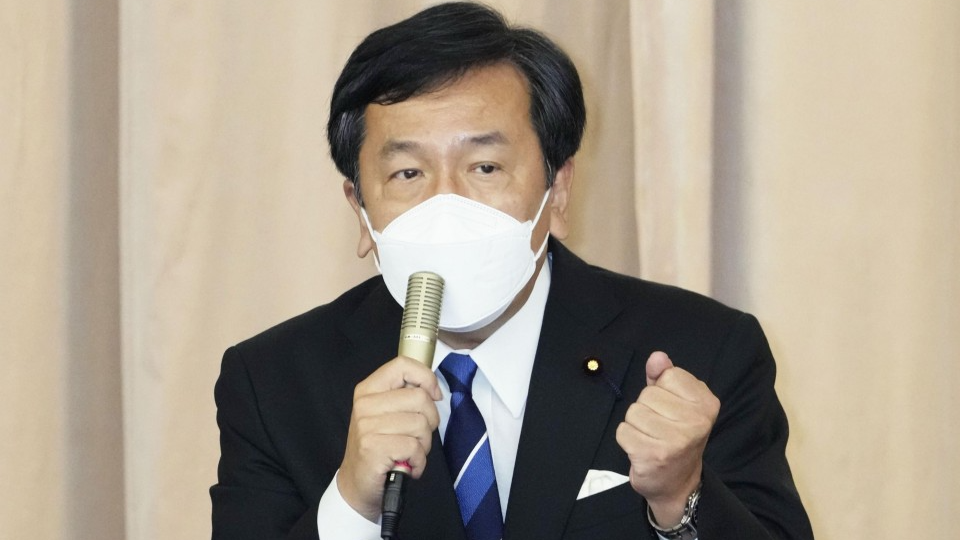 Yukio Edano, leader of the main opposition Constitutional Democratic Party of Japan, speaks at a meeting of party members at the Diet building in Tokyo on Oct. 4, 2021. (Kyodo)

Despite calling the election timing "outrageous," major opposition parties are seeking to achieve a change of government in the upcoming polls at a time when the economy remains damaged by prolonged COVID-19 restrictions.

"It is an outrageous schedule for dissolving the lower house (on Oct. 14)," Yukio Edano, leader of the main opposition Constitutional Democratic Party of Japan said. "He is running away from Diet debate."

Kishida said he will dissolve the powerful lower house on Oct. 14, the last day of an extraordinary Diet session that elected him as the new Japanese leader on Monday. Campaigning for the Oct. 31 election will start on Oct. 19.

The opposition parties had demanded that enough time be allocated for Kishida to answer questions in parliament.

The election must be held as the current four-year term of lower house members ends on Oct. 21.

"We have just 17 days between the dissolution of parliament and voting, which is the shortest in the postwar era and unusual," Kazuo Shii, chairman of the Japanese Communist Party told reporters.

It had previously been speculated that the election would be held in early November. But the new premier is seen as wanting to seek a mandate sooner rather than later as Japan has seen the number of newly confirmed COVID-19 cases on a downtrend.

With the election approaching, Kishida will likely skip a summit of the Group of 20 economies on Oct. 30 and 31 in Italy, forgoing his debut on the international stage as Japanese prime minister.

"It makes me concerned when I think about protecting national interests," said Yuichiro Tamaki, who heads the Democratic Party for the People.