U.S. Ambassador to Japan nominee Rahm Emanuel on Wednesday vowed to enhance bilateral ties as China seeks to "conquer through division," while welcoming a potential increase in Japan's defense spending.

Calling the bilateral partnership the "cornerstone of peace and prosperity in a free and open Indo-Pacific," Emanuel, who served as a top aide to former President Barack Obama, told the Senate Foreign Relations Committee, "If confirmed, my top priority will be to deepen these ties."

"China aims to conquer through division. America's strategy is security through unity. That regional unity is built on the shoulders of the U.S.-Japan alliance," the 61-year-old added. 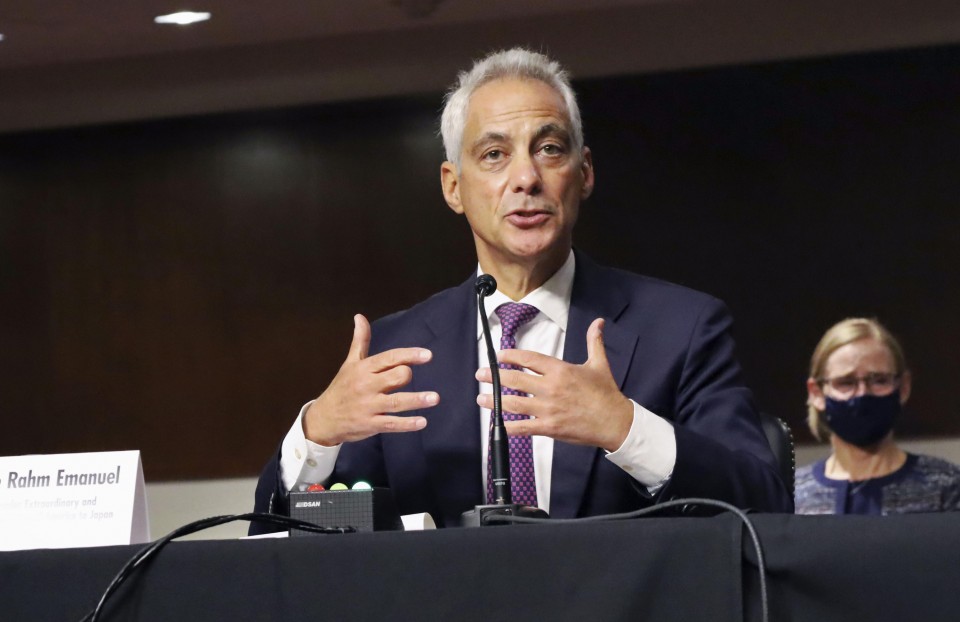 The U.S. ambassadorship to Japan has been vacant since William Hagerty stepped down in July 2019 to run for the Senate. The nomination requires Senate approval.

The Senate committee conducted Emanuel's hearing on the same day as one for Nicholas Burns, a former diplomat and currently a Harvard University professor who was nominated to become the U.S. ambassador to China.

Japan's ruling Liberal Democratic Party, headed by Prime Minister Fumio Kishida, has proposed ahead of the Oct. 31 general election increasing defense outlays, possibly to 2 percent of gross domestic product or higher. Japan, with its pacifist Constitution, has so far kept defense spending to around 1 percent of GDP.

"Willing to go from 1 percent to 2 percent is a sea change in thinking," the former congressman, known for his abrasive style and his close ties with U.S. President Joe Biden, told senators.

It would be a "reflection that they know they have a greater role to play and they have greater threats."

Emanuel, meanwhile, also expressed eagerness to create a common front with the United States, Japan and South Korea, warning that China, Russia and North Korea are "trying to find cracks and fissures in the alliances."

Although ties between Tokyo and Seoul remain soured over wartime history issues, Emanuel said the United States and its two Asian allies should focus on addressing the current challenges and threats posed by China and North Korea's nuclear and missile programs.

He said he would like to "make sure that we deal with 21st century issues as allies and partners" and not let the 20th century issues "rob or mug that opportunity."

Emanuel's pledge to bolster Japan-U.S. ties was welcomed by Japan with a government spokesman saying Tokyo is waiting for him to assume the ambassadorship.

"We look forward to working with him to further strengthen the Japan-U.S. alliance and to work closely together to realize a free and open Indo-Pacific," Deputy Chief Cabinet Secretary Yoshihiko Isozaki told a press conference in Tokyo.

Emanuel was White House chief of staff from 2009 to 2010 for Obama, whom Biden served as vice president, before becoming Chicago's mayor for two terms from 2011 to 2019.

Burns, 65, said during his hearing that China is seeking to "become the most powerful country economically, politically and militarily in the Indo-Pacific" and slammed Beijing for its assertive behavior toward U.S. allies and partners in the region.

"Beijing has been an aggressor against India along their long Himalayan border, against Vietnam, the Philippines, and others in the South China Sea, against Japan in the East China Sea," he said.

In recent years, Beijing has become more assertive regarding its claim to the Senkaku Islands, a group of Japanese-administered islets in the East China Sea that China calls Diaoyu. It has also been pushing its territorial claims in the South China Sea.

Burns also said China's human rights abuses, or "genocide," against the Muslim Uyghur minority in the far-western Xinjiang region as well as its "bullying" of Taiwan are "unjust, and must stop." 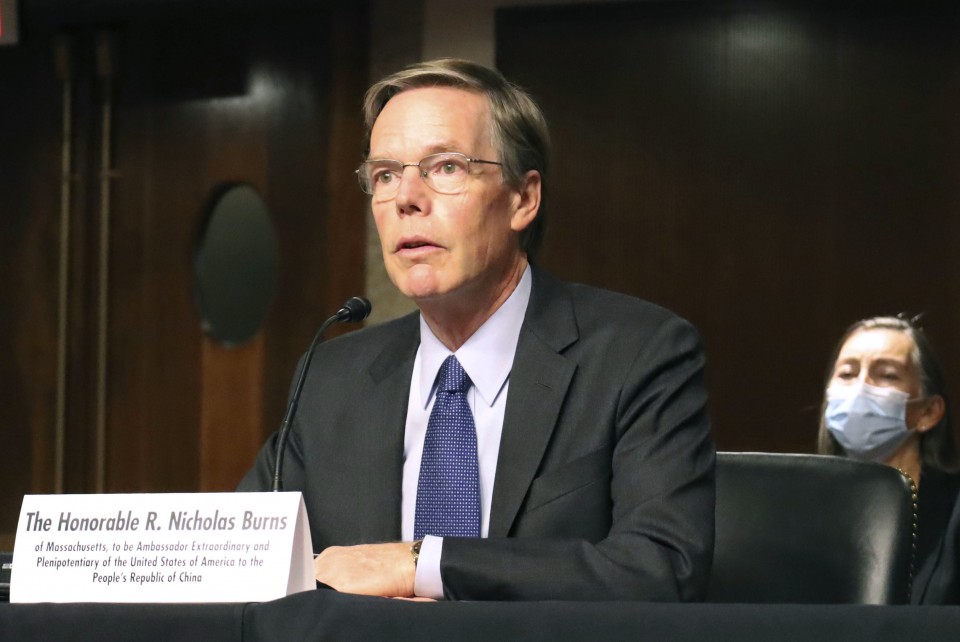 U.S. Ambassador to China nominee Nichokas Burns speaks at a hearing of the Senate Foreign Relations Committee in Washington on Oct. 20, 2021. (Kyodo)

Beijing views the self-ruled democratic island of Taiwan as a renegade province awaiting reunification, by force if necessary. It has been stepping up pressure on Taipei, such as by increasing the number of Chinese military planes entering the island's air defense identification zone.

Burns acknowledged the need to continue to help Taiwan maintain a sufficient self-defense capability, as stipulated in the Taiwan Relations Act, which Congress passed in 1979 after the United States switched its diplomatic recognition from Taipei to Beijing.

But he was against revisiting Washington's long-standing policy of maintaining an ambiguous position regarding the use of military force in response to a Chinese attack on Taiwan.

The "strategic ambiguity" policy was adopted after U.S.-Taiwan relations became "unofficial" in 1979. It is intended not only to deter China from using force against Taiwan but also to deter Taiwan from seeking independence, as neither Beijing nor Taipei can feel certain about U.S. intervention to defend Taiwan should a conflict arise.

"The smartest and effective way for us to help deter aggressive actions by China across the Taiwan Strait will be to stay with the policy that has been in place," he said.

Burns was undersecretary of state for political affairs, the State Department's third-ranking official, from 2005 to 2008 under the George W. Bush administration.

U.S. to pick deputy rep to Taiwan as interim envoy to Japan

3 hours ago | The Kyoto Shimbun