Japan's Sarina Satomi won the gold medal Saturday in the women's badminton WH1 singles at the Tokyo Paralympics, becoming the first Japanese player to win gold in the sport that was newly introduced at the Tokyo Games. 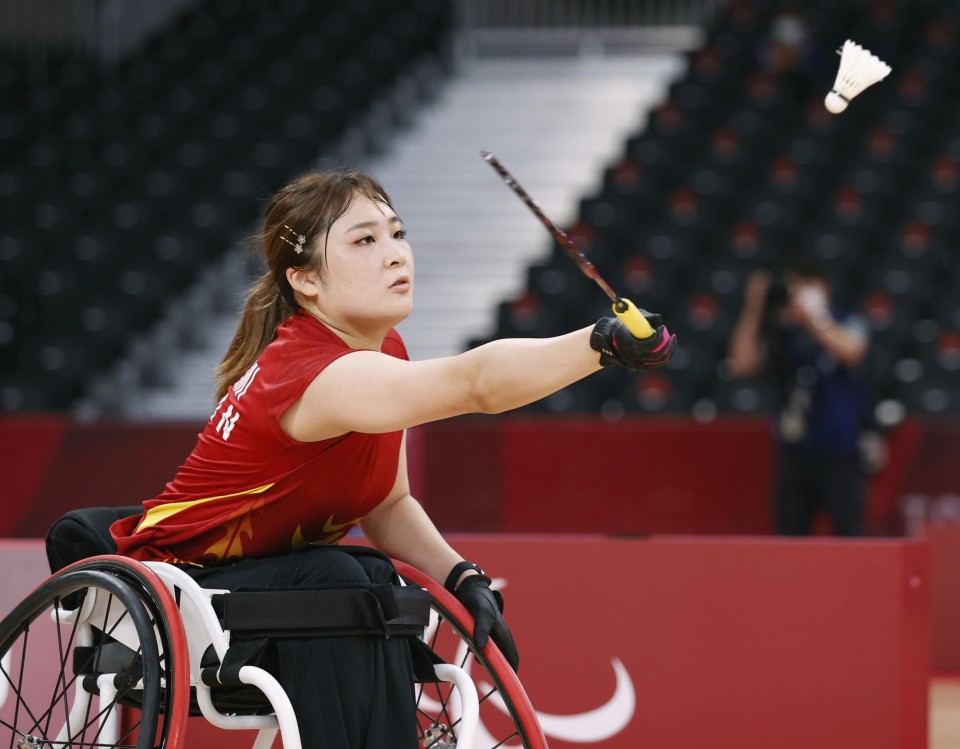 Japan's Sarina Satomi plays against Sujirat Pookkham of Thailand in the women's badminton singles WH1 final at the Tokyo Paralympics on Sept. 4, 2021, at Yoyogi National Stadium in Tokyo. (Kyodo)

"I am incredibly happy, it is like a dream," Satomi said. "I have worked hard for this moment and for this day so I am very happy to win the gold I have been aiming for."

After a shaky start that culminated in the first game loss, Satomi got on track to start the second and built an early lead.

Sujirat was not willing to roll over, though, and roared back to take a three-point lead, but Satomi was up for the task and closed out the 21-19 game with a shot directed at her opponent's body.

In the decider, Satomi built an 11-8 lead at the mid-game break. Her opponent's heavily taped shoulder appeared to be giving her discomfort and the Japanese took advantage, closing out the game 21-13 to claim gold.

The Chiba Prefecture native acquired spinal cord injuries in a traffic accident in 2016 when she was a high school student.

In the following match, Ayako Suzuki had no answers to the aggressive play of China's Yang Qiuxia, the second seed overcoming the first 21-17, 21-9 in their SU5 final.

Suzuki was immediately on the back foot as the Chinese player showed superior court coverage on her side of the net while forcing Suzuki to stretch and reach as she moved the shuttlecock to all corners of the other.

The first game was relatively tight, finishing 21-17, but in the second Yang built a large advantage and gave nothing back, closing out the gold with an impressive 21-9 second stanza.

The 34-year-old Suzuki was born with an impairment to her right arm and is a two-time world champion, most recently in 2017. She also won silver at the 2019 worlds, beaten there too by Yang.