Prince Hisahito, the nephew of Emperor Naruhito and second in line to the Japanese imperial throne, turned 15 on Monday as his school activities continued to be affected by the novel coronavirus pandemic.

The son of Crown Prince Fumihito is currently a third-year student at Ochanomizu University Junior High School. He is the only heir of his generation as the Imperial House Law states that only males with male lineal descent from emperors can ascend the Chrysanthemum Throne. 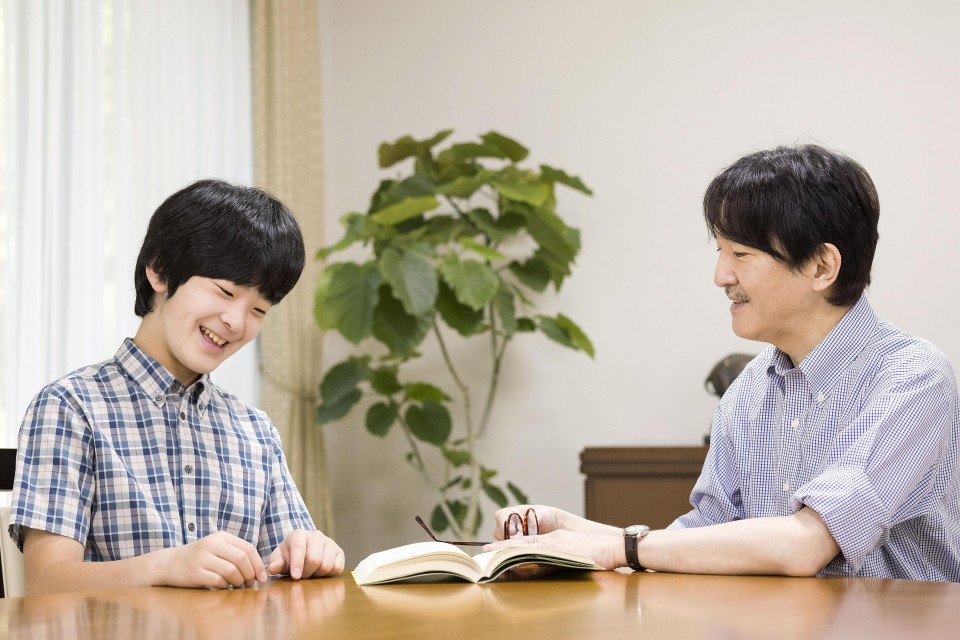 Prince Hisahito (L), the nephew of Emperor Naruhito and second in line to the Japanese imperial throne, pictured with his father Crown Prince Fumihito in Tokyo on Aug. 5, 2021. (Photo courtesy of Imperial Household Agency)(No trimming allowed)(Kyodo)

Next spring, the young prince is expected to enter a high school not affiliated with Ochanomizu University, as the high school attached to the university is an all-girls school. The pandemic has forced the cancellation of the junior high school's school trips and the prince took some online classes, according to the Imperial Household Agency.

Prince Hisahito has joined an educational field trip to hear lectures given by those working on social issues. During the excursion, he also had an exchange with disabled staff of a flower shop and saw facilities related to the Tokyo Olympics aboard a water bus.

At a student festival held in September last year, the prince and his friends released their interviews with people suffering from the fallout of the pandemic in a video and posters.

His writing recalling a trip to the Ogasawara Islands in the Pacific with his mother Crown Princess Kiko won a prize in a literature contest hosted by Kitakyushu city and the young prince attended an online award ceremony in March.

In August, he took part in an online event marking the 10th anniversary of the 2011 devastating quake-tsunami disaster that hit northeastern Japan and five years since a pair of powerful earthquakes in Kumamoto Prefecture in 2016 and learned about survivors' experiences.

In Japan, females including his elder sisters Princess Mako and Princess Kako and the emperor's 19-year-old daughter Princess Aiko are barred from succeeding the throne. They must leave the imperial family upon marrying a commoner under the current rules.