Shohei Ohtani struck out 10 over eight strong innings but could not secure his 10th win Sunday as the Los Angeles Angels fell 3-2 to the Oakland Athletics in 10 innings.

Showing no sign of the arm soreness that pushed back his start by two days, the two-way sensation looked sharp as he continued bidding to become the first American or National league player since Babe Ruth in 1918 to reach double figures in both wins and home runs. 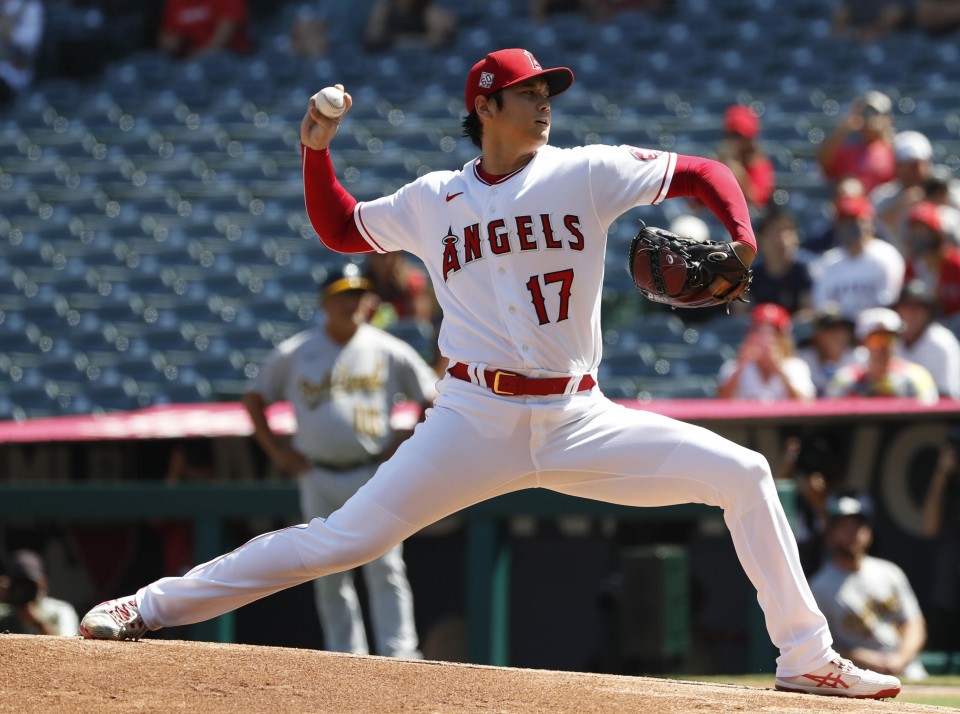 Shohei Ohtani of the Los Angeles Angels pitches against the Oakland Athletics on Sept. 19, 2021, at Angel Stadium in Anaheim, California. (Kyodo)

Ohtani was dominant through most of his eight frames but got stuck with no decision after giving up two solo home runs -- to Yan Gomes in the third and Matt Chapman in the fourth -- and leaving with the Angels trailing 2-0.

In an efficient 108-pitch outing, he allowed just five total hits and three walks, two of them intentional. At the plate, he went 0-for-2 while drawing a pair of walks, leaving his home run tally at 44, the third-highest in the majors.

"I wanted to go nine innings, had my pitch count been lower," Ohtani said. "My control was good overall, but I gave up home runs, so there are things I still need to work on."

The Angels scored two runs in the ninth to prevent Ohtani taking the loss before a Jed Lowrie sacrifice fly helped the Athletics sweep the series and stay within two games of the Toronto Blue Jays for the second AL wild card spot.

Lou Trivino (6-7) got the win, throwing 1-2/3 innings of relief to finish the game after starter Frankie Montas put the A's in a commanding position with seven innings of one-hit, no-run ball.

Despite failing to reach the win milestone, Ohtani earned plaudits from manager Joe Maddon while underscoring his status as the favorite for AL MVP. Over 22 starts, he is 9-2 with a 3.28 ERA and 146 strikeouts.

"He did beautifully," Maddon told MLB.com. "He had pretty much everything working today. He gave up two homers. Otherwise, he was outstanding. It was really well done."

Elsewhere in the majors, Hirokazu Sawamura blew a lead but earned the win for the Boston Red Sox, who maintained first place in the AL wild card race by beating the Baltimore Orioles 8-6.

Entering with none out and one on in the top of the seventh at Fenway Park, Sawamura (5-1) walked two straight batters and allowed a three-run double that turned a 5-3 lead into a 6-5 deficit.

The Japanese right-hander punched out a pair to retire the side before the Red Sox scored three runs in the bottom of the inning en route to their fifth straight win.

The Texas Rangers designated right-hander Kohei Arihara for assignment, clearing a spot on the 40-man roster.

The Rangers signed the former Nippon Ham Fighters ace to a two-year contract last winter. He went 2-4 in 10 starts and had been expected to miss the rest of the 2021 season following shoulder surgery in May, but made three starts after returning from the injured list.