Foreign ministers from Japan, the United States, Europe and elsewhere on Wednesday agreed to work together in dealing with the situation in Afghanistan, as they seek to ensure safe departures for those fleeing the Taliban-controlled country, the Japanese government said.

With concerns growing that uncertainty and insecurity could lead to a humanitarian crisis in Afghanistan, Japanese Foreign Minister Toshimitsu Motegi pledged during the online meeting to provide $65 million in fresh aid through international organizations to assist locals with shelter, food, water and other needs.

The meeting, hosted by U.S. Secretary of State Antony Blinken and German Foreign Minister Heiko Maas, was joined by participants from a total of 22 countries, the Japanese Foreign Ministry said in a press release. 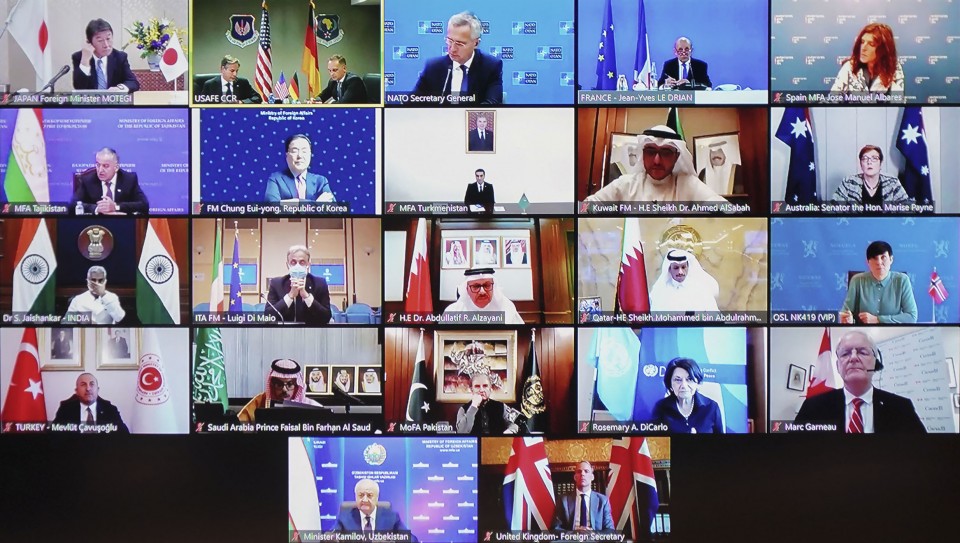 Foreign ministers and other officials from 22 countries participate in an online meeting on Sept. 8, 2021, to discuss the situation in Afghanistan following the recent takeover by the Taliban.(Photo courtesy of Japanese Foreign Ministry)(Kyodo)

Motegi had earlier said the meeting was expected to be joined by China and Russia. But the two countries were not mentioned in the press release.

Blinken hosted the meeting in Germany, on the second leg of a trip that also took him to Qatar, following the U.S. troop withdrawal from Afghanistan late last month. The pullout marked an end of the two-decade war triggered by the terror attacks of Sept. 11, 2001, on American soil.

But an unexpectedly swift takeover of Afghanistan by the Taliban, an Islamist group, during the U.S. military's drawdown led to a chaotic evacuation process at the international airport in Kabul as many Afghans who worked with the United States rushed to flee the country, fearing for their lives under the new rulers.

The United States has aided the evacuation of some 125,000 people from Afghanistan, including 6,000 American citizens, according to Blinken. President Joe Biden has vowed to continue to work with other countries to ensure the safe passage of Americans, Afghans and foreign nationals who wish to leave the country.

Blinken said at the outset of the ministerial meeting that the Taliban, including the recently announced caretaker government and any eventual Afghan government, should be held to its commitment to allow foreign nationals, visa holders and Afghans to travel outside the country if they wish.