Excavated Buddha heads and other items have been looted from the storage facility of a French archaeological team involved in conserving and restoring the famous Bamiyan site in central Afghanistan, a UNESCO World Heritage site, it was learned Monday.

It is believed that miscreants took advantage of the confusion that followed the Taliban's takeover of area in the first half of August to loot the artifacts, according to local residents and Japanese archaeologists whose warehouse was also targeted. 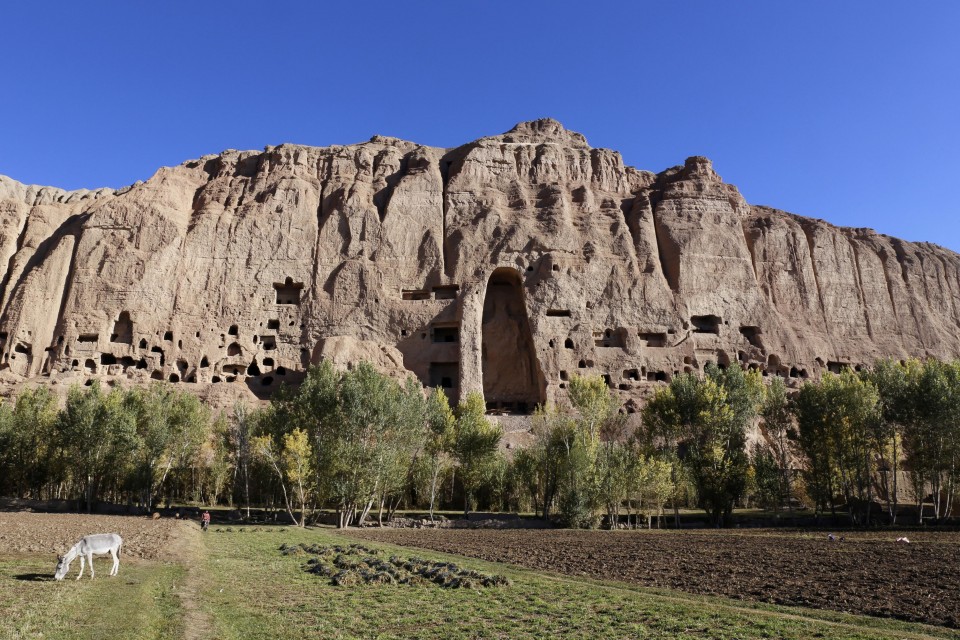 A World Heritage site in Bamiyan, central Afghanistan, is seen in a file photo taken in 2018. Excavated Buddha heads and other items have been looted from the storage facility of a French archaeological team involved in conserving and restoring the site. (Kyodo)

In 2001, when the Islamists were previously in power, they blew up and destroyed the two 6th century Great Buddhas of Bamiyan, carved into cliffs, based on an extreme interpretation of Islam that forbids idolatry.

The warehouse of the French corps stored valuable excavations from the vicinity of the "Eastern Buddha."

According to a local man, there was a phone call asking him to buy items such as Buddhist heads, coins and scriptures that seemed to have been stolen. An image of a Buddha head sent to the smartphone had the reference number of the French team.

This man had cooperated with foreign experts and was involved in the restoration of the ruins.

On the phone, a young woman's voice proposed to sell a total of 25 relics for $100,000 and said that if the offer was declined, they would be taken to neighboring Pakistan.

According to Yoko Taniguchi, an associate professor at the University of Tsukuba who has worked on the restoration of archaeological sites, the Japanese team had stored colored mural pieces and tools necessary for restoration.

A member of the French team contacted him earlier this month, explaining that the warehouse's lock had been broken and boxes containing mural pieces had been overturned. There were also precious pieces of oil-painted murals.

The extent of damage and losses could not be confirmed.

According to the Japanese university, data from chemical analysis of the pigments from the 7-10th century paintings indicates that these murals can be considered the world's oldest oil paintings.

In 2003, the cultural landscape and archaeological remains of the Bamiyan Valley were inscribed simultaneously on UNESCO's World Heritage List and the List of World Heritage in Danger.