During their meeting, held on the fringes of the U.N. General Assembly sessions, Lavrov took up the issue and Motegi repeated Tokyo's position that Japan does not support the scheme as it would involve applying Russian laws to the islands. 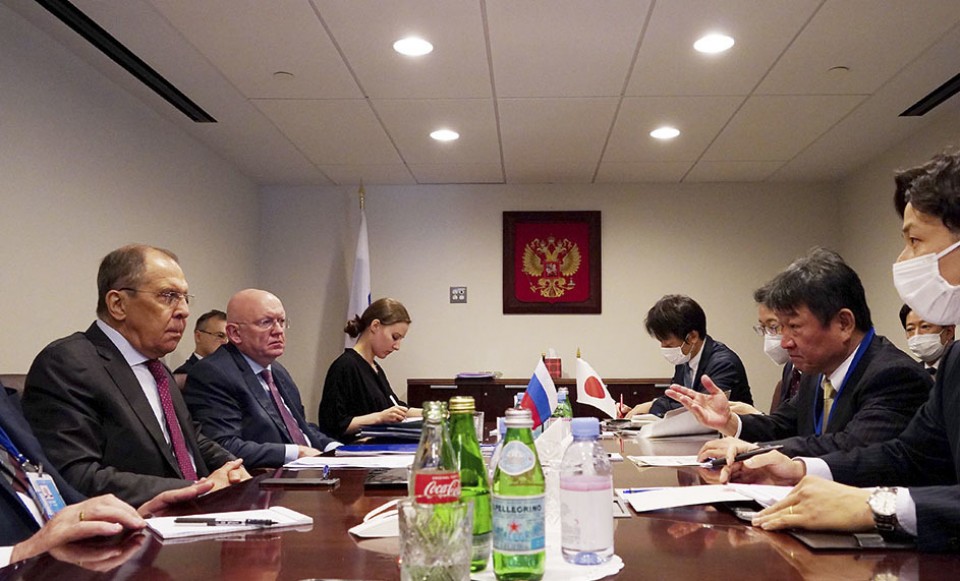 With regard to joint economic projects on the islands, they should be implemented without infringing on Japan's legal position, Motegi added.

Russian President Vladimir Putin unveiled the proposal earlier this month, with the aim of luring overseas investment to the islands off Japan's northernmost main island of Hokkaido.

The two ministers also discussed a longstanding territorial dispute that has prevented the two countries from signing a postwar peace treaty.

Motegi told Lavrov that Japan wants to develop the relationship with Russia broadly and mutually, including through efforts on the issue of a postwar peace treaty.

"We agreed to continue talks by using various opportunities toward broad development of Japan-Russia relations," Motegi told reporters after the meeting.

The bilateral talks became the first in-person meeting between Motegi and Lavrov in about 19 months due to the coronavirus pandemic.

The two also exchanged views on the annual visa-free visits to the islands from Japan that have been suspended for two years in a row amid the pandemic.

Such programs allow groups of Japanese nationals to travel to the disputed islands, called the Northern Territories in Japan and the Southern Kurils in Russia, without passports or visas.

The dispute over the sovereignty of the islands has been a major stumbling block to the countries signing a peace treaty more than 70 years after the end of World War II.

Tokyo claims the Soviet Union seized the islands illegally soon after Japan's surrender, while Moscow argues it did so legitimately.

Among other issues, Motegi called for Russia's cooperation in efforts to resolve the past abductions of Japanese citizens by North Korea and Lavrov assured his country's support.

They also agreed to cooperate toward ensuring stability in war-torn Afghanistan.