U.S. President Joe Biden on Tuesday pledged the start of a "new era of relentless diplomacy" involving working with allies and partners to tackle challenges such as the coronavirus pandemic and defending human rights, while signaling the country's shifting of focus to the Indo-Pacific amid increasing competition with China.

Biden's first speech to the U.N. General Assembly since taking office largely highlighted multilateralism in contrast to his predecessor Donald Trump's "America First" unilateralist policies, even though Biden himself has recently faced criticism for upsetting allies over some key foreign policy moves. 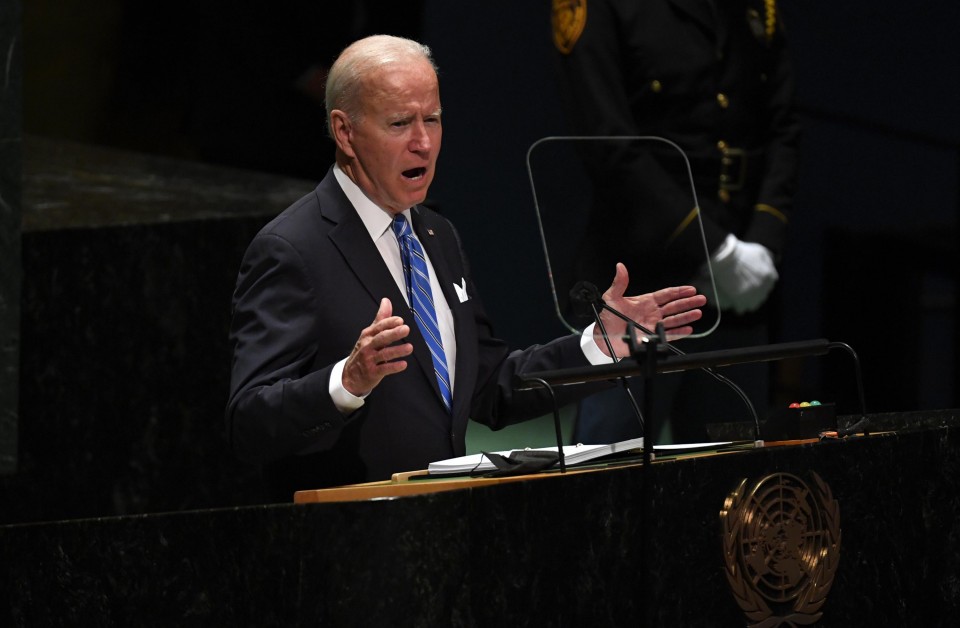 Noting that the United States finally ended the war in Afghanistan triggered by the Sept. 11 terror attacks in 2001, Biden said at the beginning of his 30-minute speech in New York, "As we close this period of relentless war, we're opening a new era of relentless diplomacy."

"As we look ahead...we will lead on all the greatest challenges of our time, from COVID to climate, peace and security, human dignity and human rights, but we will not go it alone," he said.

Calling the Indo-Pacific among "most consequential" regions of today and tomorrow, Biden also said the world's challenges will be dealt with jointly with allies and partners through "cooperation at multilateral institutions like the United Nations."

Biden did not explicitly name China in his speech, but alluded to the Asian country's concerning activities in the region by vowing to "oppose attempts by stronger countries to dominate weaker ones whether through changes to territory by force, economic coercion, technical exploitation or disinformation."

Concerns have been growing over China's military buildup, unfair trade practices, and territorial claims in the East and South China seas, as well as its pressure on Taiwan, a self-ruled democratic island which Beijing views as a renegade province to be reunified with mainland China by force if necessary.

Biden also called on countries to condemn the oppression of ethnic and religious minorities, touching on China's far-western Xinjiang region, where the United States and many other countries are concerned about the abuses taking place against the Muslim Uyghurs, while vowing to pursue new rules of global trade so that every country can compete fairly.

But he added, "We are not seeking a new Cold War or a world divided into rigid blocs."

Biden indicated that the United States will seek cooperation with the world's second-largest economy where possible, saying, "The United States is ready to work with any nation that steps up and pursues peaceful resolution to shared challenges, even if we have intense disagreements in other areas -- because we'll all suffer the consequences of our failure if we do not come together."

Turning to North Korea's nuclear and missile issues, Biden said the United States will seek "serious and sustained" diplomacy to pursue the complete denuclearization of the Korean Peninsula.

"We seek concrete progress toward an available plan with tangible commitments that would increase stability on the peninsula and in the region, as well as improve the lives of the people in the Democratic People's Republic of Korea," he said, referring to North Korea by its official name.

The Biden administration has been reiterating its willingness to engage with North Korea, but no progress has been seen so far.

While the speech signaled Biden's high aspirations to restore U.S. leadership on the world stage and revitalize alliances after a bumpy four years under Trump, the annual U.N. General Debate began on Tuesday amid an escalation of a diplomatic row between the United States and France, an old U.S. ally.

France has been infuriated at being blindsided by a recently announced security partnership between the United States, Britain and Australia focusing on the Indo-Pacific, which led Australia to ditch a multibillion-dollar French submarine contract for the United States.

Some U.S. allies have also been rankled by the recent U.S. troop withdrawal from Afghanistan and evacuation mission of civilians there, which turned out chaotic as the Taliban Islamist group took control of the country more rapidly than expected.