Japan's Digital Agency was launched Wednesday as the country seeks to accelerate digitalization of local and central government services after the novel coronavirus pandemic further exposed the need for reform.

Digitalization minister Takuya Hirai is in charge of the new agency, which is headed by Prime Minister Yoshihide Suga, while Yoko Ishikura, honorary professor of Hitotsubashi University, assumed the top bureaucrat post of digital supervisor. 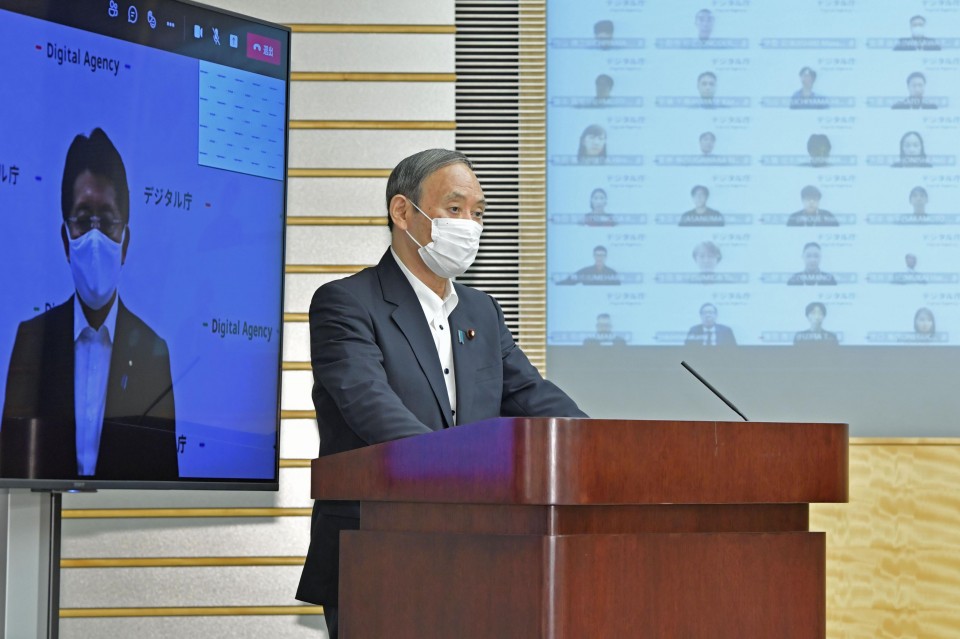 Japan's Prime Minister Yoshihide Suga attends a launch ceremony of the Digital Agency and gives a speech to staff at his office while Digitalization minister Takuya Hirai (L) is seen on a screen on Sept. 1, 2021. (Kyodo)

Of the roughly 600 members of the agency, more than 30 percent joined from the private sector while the remainder includes officials from the industry and communications ministries as well as secretaries and back office staff.

Suga at the launch ceremony called on the agency members to work swiftly and be free-thinking, and to "use your ingenuity as if you are remaking the entire country," noting there are many issues that have been left untouched for years.

Hirai also said Japan ranks low in international digitalization, adding, "We need to create a rich society full of options without leaving anyone behind."

"Digitalization is a driving force for creating a new society," said Ishikura. "I hope this will be an occasion for drastically changing Japan's position in the world."

The ceremony was held at the agency in Tokyo with mostly just executives attending it, while Suga and most of the other staff members joined remotely amid the coronavirus pandemic.

The Suga government has placed high priority on digital reforms since its launch last September as Japan has been struggling to promote administrative reforms that utilize information technology. The slow progress to date in the country's efforts dating back to around 2000 is due in part to decentralized information systems and privacy concerns.

The pandemic has exposed challenges caused by a delay in the initiative, including local governments struggling to provide financial support swiftly and share information on COVID-19 patients. In addition, online classes were not widely available in Japan during school closures in the initial phase of the virus spread.

The agency will work on digitalizing COVID-19 "vaccine passports," or certificates for people who have been fully inoculated against the respiratory disease, by the end of the year.

It will also launch a system by March 2023 for people to register their "My Number," or a 12-digit number given to each citizen and foreign resident, together with their bank accounts so government benefits can be delivered swiftly.

A total of 31 administrative procedures linked to child-rearing, nursing care and other aspects of living will be digitalized by March 2023 and information systems that currently vary among municipalities will be standardized by March 2026.

Aside from promoting digitalization in the hope this will make various services more convenient to use, the agency will be also tasked with protecting privacy as the reform would increase exchanges of personal information.

In the last Diet session, where members deliberated legislation on launching the Digital Agency, both houses of parliament passed a resolution seeking sufficient measures against leakage of personal information.