A prominent pro-democracy group in Hong Kong known for its yearly vigil commemorating the 1989 Tiananmen Square crackdown has said it deleted its publications on the internet, including photos of the protest at the Beijing square, to comply with police orders.

Activists of the Hong Kong Alliance in Support of Patriotic Democratic Movements of China said Thursday that they had received a notice issued by the city's police commissioner Friday last week that said the group must take down all its online content within seven days, in order to comply with the national security law. 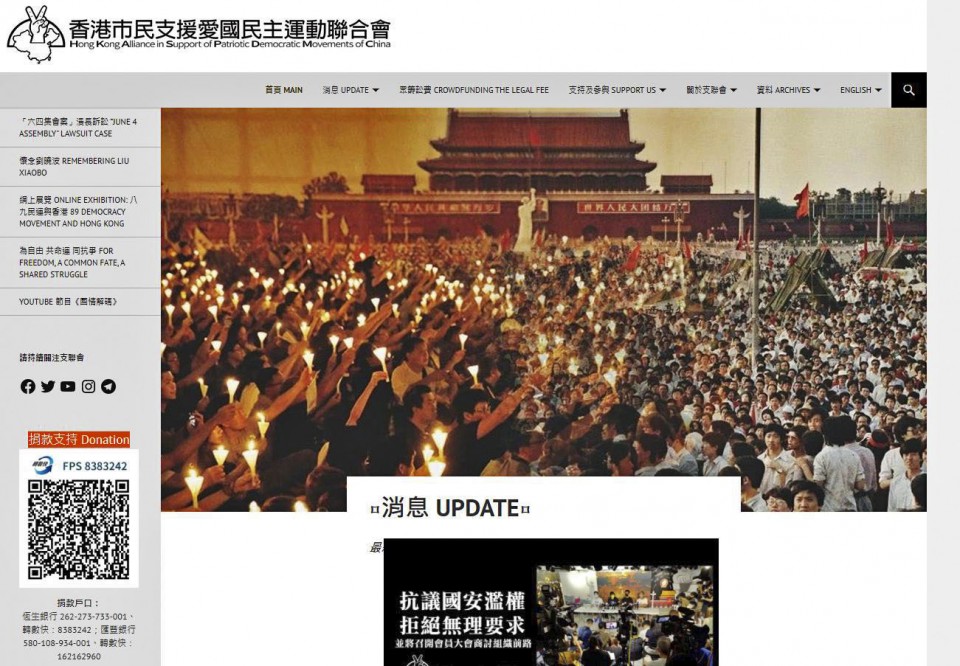 Screenshot shows the top page of the pro-democracy Hong Kong Alliance in Support of Patriotic Democratic Movements of China's website carrying a photo of a 1989 pro-democracy movement in Beijing, which was closed on Sept. 16, 2021. (Kyodo)

The Alliance has since closed its website, which had a large amount of content about the 1989 Tiananmen Square protests, including photos of the protests and documented testimonies by families of some of the protesters killed in the crackdown.

Four members of the group, including vice chairwoman Tonyee Chow, were arrested earlier this month after they refused to comply with a police demand to hand in information on its operations.

Last month, the alliance passed a resolution to disband, citing mounting suppression from the authorities as Beijing continues its efforts to crack down on dissent in the city.

The group is the latest organization cracked down under the Beijing-imposed national security law, which criminalizes acts of secession, subversion, terrorism and collusion with foreign forces.