More than 50 percent of Japan's population has received two shots of a COVID-19 vaccine, with the vaccination rate on course to soon draw level with countries such as Britain and France, the minister in charge of the coronavirus response said Sunday.

"If vaccination moves ahead at the current pace, it will surpass 60 percent by the end of this month," Yasutoshi Nishimura said on a TV program, drawing a comparison with current rates in the two major European countries. 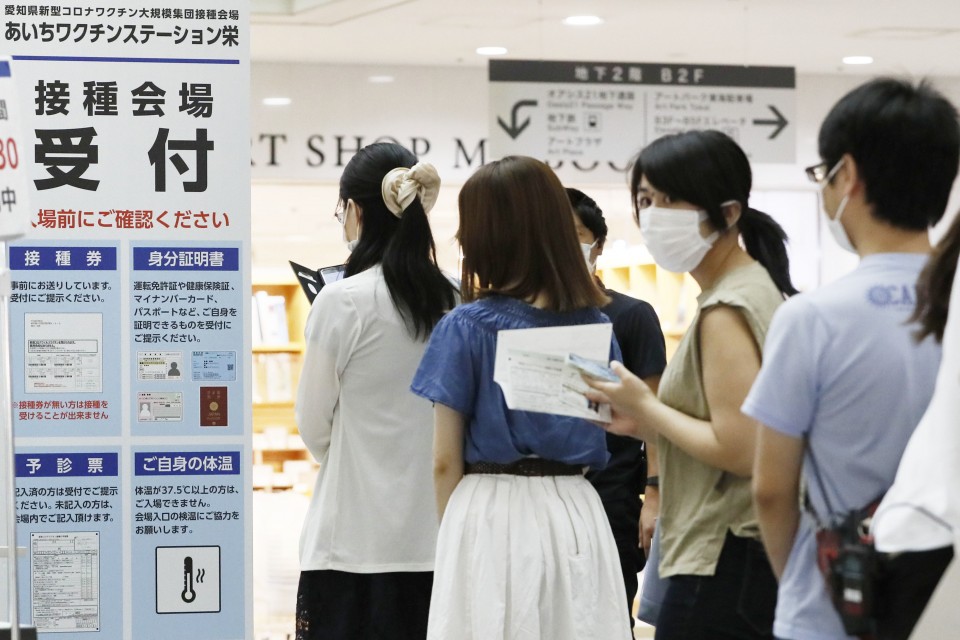 People wait in a line at a mass COVID-19 vaccination center in Nagoya, Aichi Prefecture, central Japan, on Sept. 11, 2021, as it opened for young people the same day. (Kyodo) ==Kyodo

Japan initially lagged behind other major economies in inoculating its population but has made relatively fast progress since.

In the United States, about 53 percent of the population has been fully vaccinated, according to data provided by the Centers for Disease Control and Prevention, while more than 80 percent of people in Singapore have received two doses.

The government aims to complete the full vaccination of all those eligible and willing to get the shots by early November.

The vaccination program began in February with health care workers first in line and then expanded to those aged 65 or older from April. People under 65 began receiving shots in some municipalities and at their places of work later.

Nishimura said increasing the vaccination rate to 80 percent will have a considerable impact on COVID-19 infection numbers.

While Japan's health care system remains under strain due to the highly contagious Delta variant of the coronavirus, new cases have been decreasing in the country.

Nationwide, daily COVID-19 cases totaled about 7,200 on Sunday, falling below 8,000 for the first time since July 27, with Osaka Prefecture accounting for the most at 1,147.

The western Japan prefecture has reported fewer cases than the previous week for 11 consecutive days.

Tokyo reported 1,067 new infections the same day, bringing its seven-day rolling average to 1,384 per day, down 45.7 percent from the previous week.

While a state of emergency will be extended in the capital and 18 prefectures from Monday, the government has also laid out plans for a November easing of recommendations against traveling and large events once a high proportion of the population has been vaccinated.