Meisei (5-7) drove the grand champion back with a lightning quick charge, exploited his advantage with a tricky leg move before ending the fight with an under-arm throw.

As the two stared at each other in the seconds before the bout was to start, the sekiwake made Terunofuji (10-2) wait by refusing to touch down in his fighting stance to start the bout. The referee ordered both wrestlers to stand and restart, and when the bout finally began it was 100 percent on Meisei's terms. 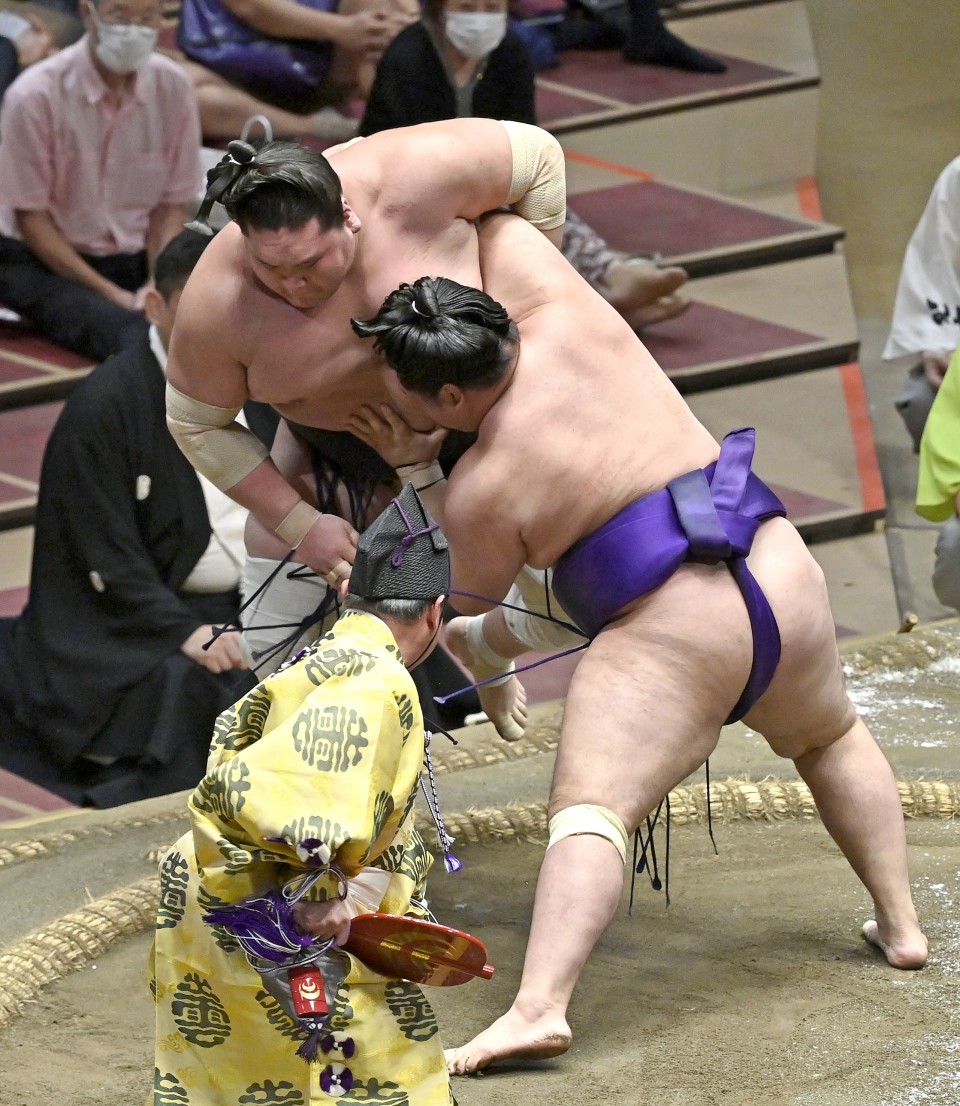 Meisei, who had lost all four of their previous bouts, came on too quickly for Terunofuji to react. With the yokozuna retreating, Meisei used his right leg to hook around Terunofuji's left, further eroding his balance and making him vulnerable at the ring's edge.

The loss prevented Terunofuji from taking a two-win lead with three days remaining in the 15-day event at Tokyo's Ryogoku Kokugikan. Four wrestlers are tied for second at 9-3. 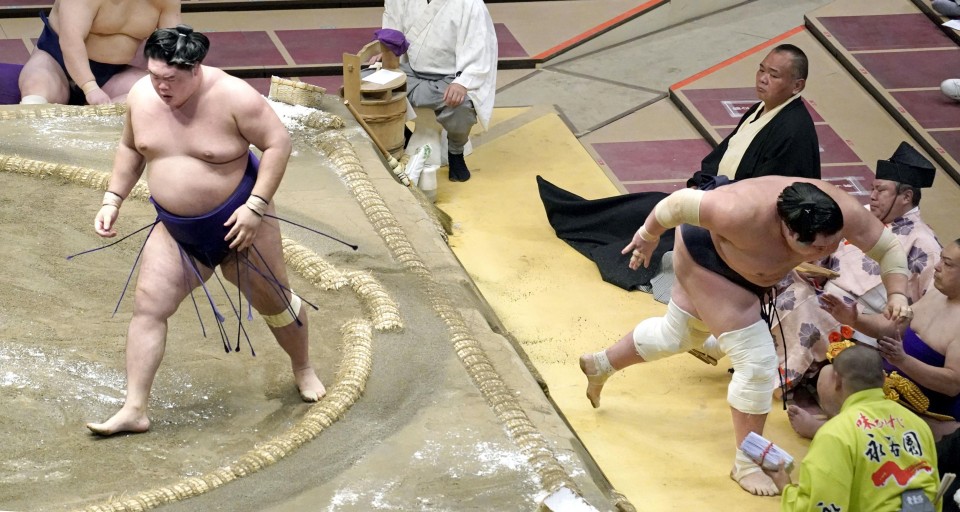 No. 11 maegashira Myogiryu (9-3), who started the day one win back of Terunofuji, got off the mark quickly but was overwhelmed by a vicious countercharge from No. 13 Kagayaki (6-6) and shoved backward out of the ring. 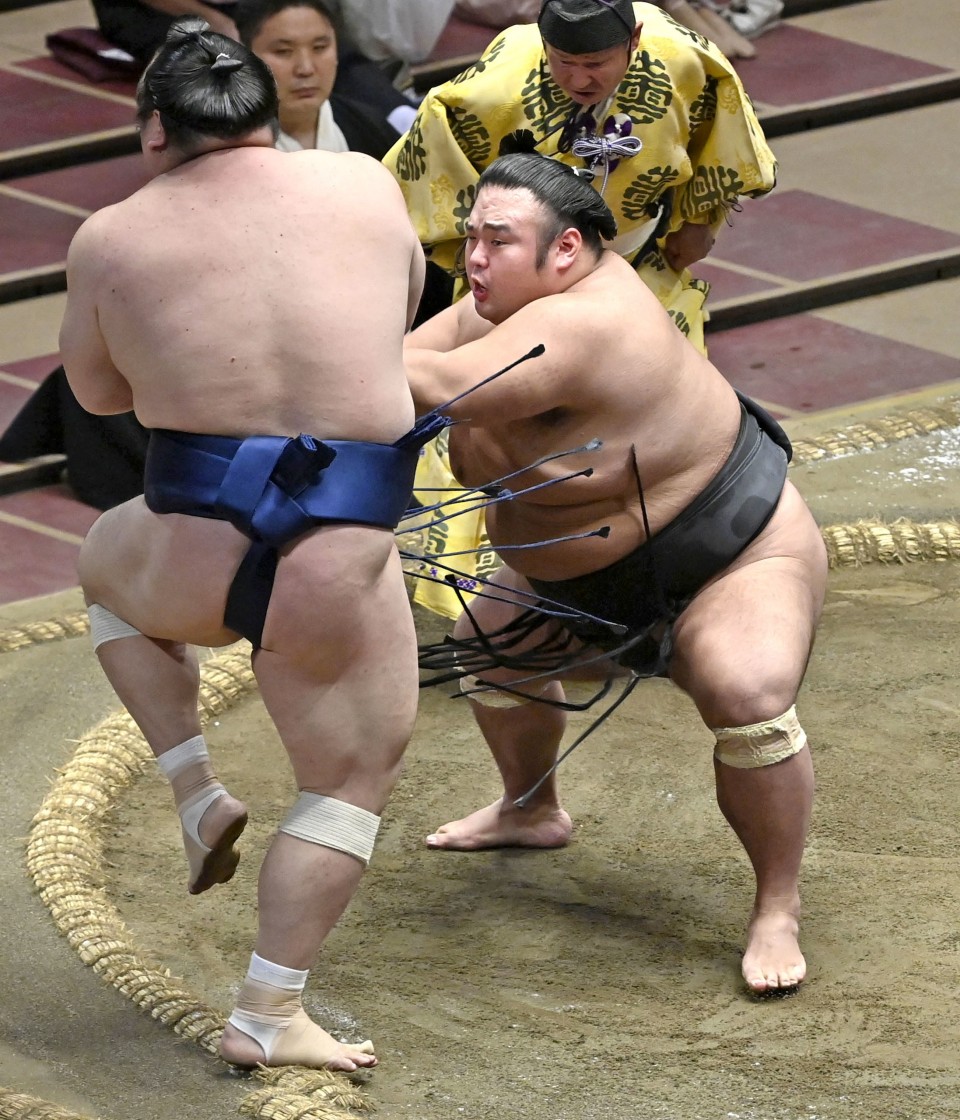 No. 6 Onosho improved to 9-3 by shoving out sekiwake Mitakeumi to his fourth loss. No. 8 Okinoumi joined the second-place pack by winning a bruising thriller against up-and-coming No. 2 Kiribayama (7-5) with a spectacular over-arm throw.

Ozeki Shodai fell to his fourth loss against nemesis Mongolian komusubi Ichinojo (6-6). After making good headway against his 206-kilgram opponent, Shodai powered up for a low decisive charge, but came in too low and too off balance, and Ichinojo slapped him down. Ichinojo has now won 10 of their 13 career bouts.

No. 17 Chiyonokuni also suffered his fourth loss, in a wild entertaining bout between aggressive 30-somethings with No. 12 and former ozeki Tochinoshin, who shoved him out to improve to 6-6.