An inspired Jakub Swierczok led the charge with a hat-trick Tuesday as Nagoya Grampus advanced to the Asian Champions League quarterfinals following a 4-2 win over South Korea's Daegu FC.

J-League champions Kawasaki Frontale were eliminated, however, losing 3-2 in a penalty shootout after playing out a goalless 120 minutes against reigning ACL winners Ulsan Hyundai. 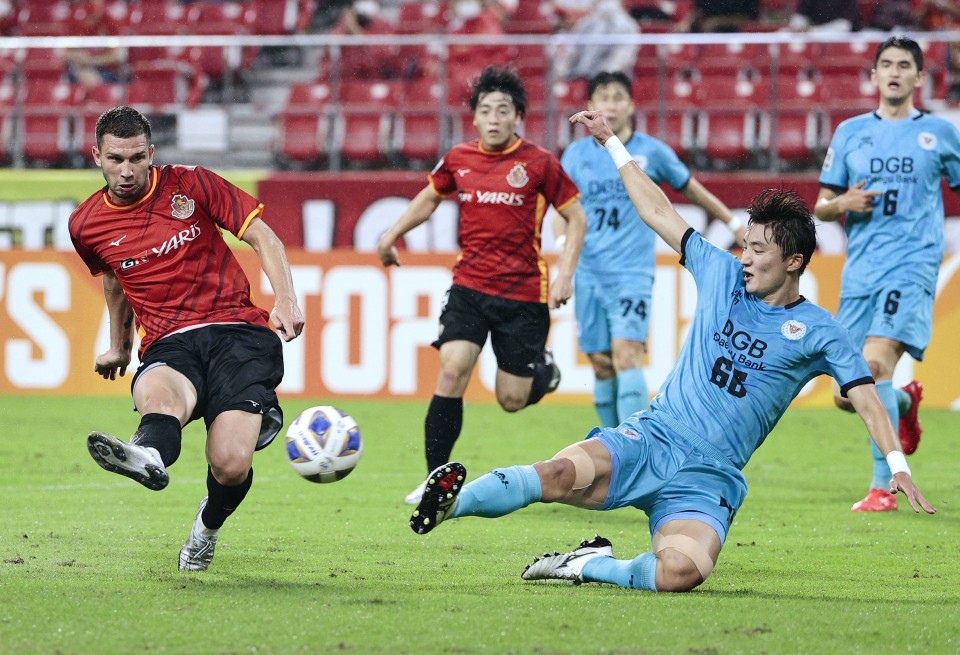 Nagoya Grampus forward Jakub Swierczok scores against South Korean side Daegu FC in an Asian Champions League round of 16 match at Toyota Stadium on Sept. 14, 2021. (Kyodo)

Returning to the ACL round of 16 for the first time since 2012, Grampus quickly conceded at Toyota Stadium on a low, long-range strike by Brazilian midfielder Cesinha.

A clever Naoki Maeda back-heel pass set up an equalizer from Poland striker Swierczok in the 12th minute, but the visitors restored their lead midway through the half when Brazilian forward Edgar headed home off a long ball into the box.

Swierczok headed the J-League side level in the 63rd minute before putting them in front two minutes later with his brilliant third goal, robbing a defender at the left of the area and firing into the top right corner.

Shinnosuke Nakatani sealed the result for Massimo Ficcadenti's men when he headed home off a corner kick in the 79th minute.

"I'm happy. I scored three goals and helped the team go to the next round," man of the match Swierczok said.

"Our first passes were good (and) I had a lot of chances, but the most important thing is that we won."

Kawasaki, away at Ulsan Munsu Football Stadium, had a close-range header from Kei Chinen denied by Ulsan keeper Cho Hyun Woo in extra time. Ulsan also hit the post late on but neither side managed to find a breakthrough.

In the shootout, Kawasaki's fifth taker Akihiro Ienaga was denied by the keeper before Yun Bit Garam converted the decisive kick for Ulsan.