The 11 members of the Trans-Pacific Partnership free trade pact discussed Tuesday the United Kingdom's bid to join the regional framework at the first meeting of their working group on the subject online, the Japanese government said.

If the U.K. bid is accepted, the country will be the first to join the original 11 signatories including Japan, Australia and Canada since the pact took effect in 2018. Earlier this month, China and Taiwan also filed their applications to accede to the free trade agreement. 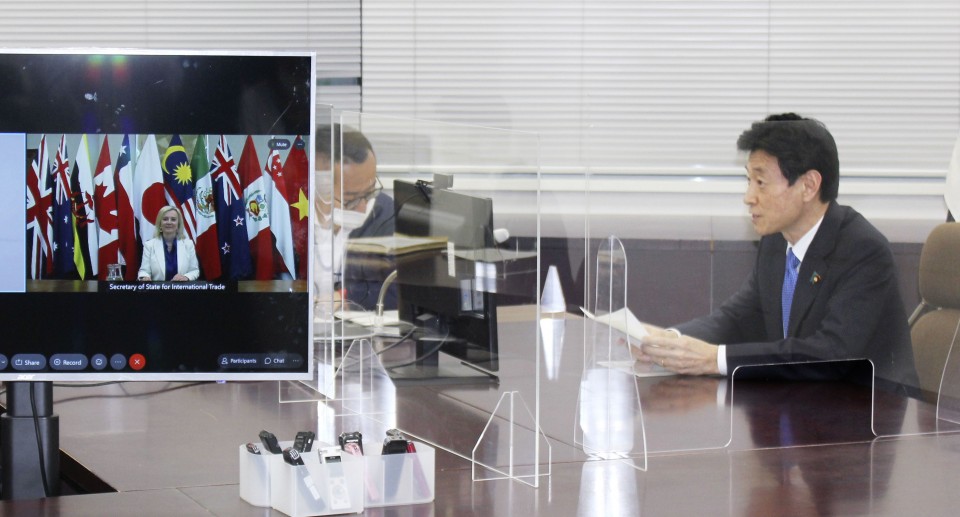 At the virtual working group meeting chaired by Japan, which holds the rotating chair of the pact's decision-making body this year, participants talked about efforts made by the United Kingdom toward membership and its domestic laws and regulations that need to be revised to meet the TPP's criteria, the Japanese government said.

London filed a request in February to join what is formally called the Comprehensive and Progressive Agreement for Trans-Pacific Partnership, or CPTPP, following its departure from the European Union last year.

Yasutoshi Nishimura, Japan's minister in charge of TPP negotiations, said last Friday that Tokyo will "strive to achieve the best results for the country's interests" during the upcoming talks on London's accession.

The pact aimed at making a free trade zone across the Pacific was promoted under the administration of U.S. President Barack Obama in a bid to balance China's increasing influence in the Asia-Pacific region.

But Washington withdrew from the pact in 2017 under Obama's successor President Donald Trump, who pursued bilateral trade deals under his so-called "America First" policy. The current administration of Joe Biden remains cautious about returning to the treaty.