Germany's "Blade Jumper" Markus Rehm won gold in the men's long jump T64 event at the Tokyo Paralympics on Wednesday, despite falling short of extending his own world record.

Rehm recorded his best leap of 8.18 meters at the National Stadium for his fourth Paralympic gold medal. He won long jump events at the 2012 London Games and the 2016 Rio de Janeiro Games. 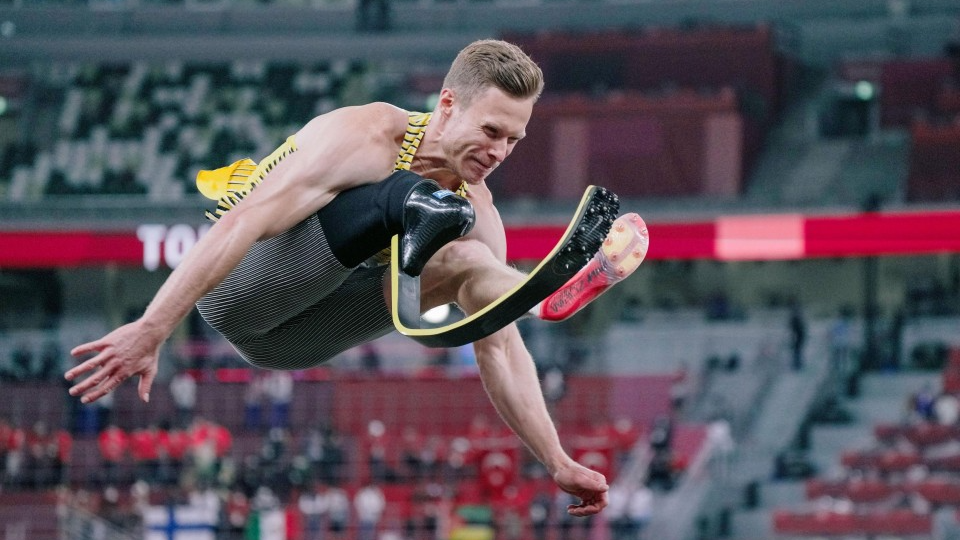 Markus Rehm of Germany competes in the men's T64 long jump final at the Tokyo Paralympics on Sept. 1, 2021, at the National Stadium in Tokyo. (Kyodo)

"I feel great. It was all about winning the gold medal. My third Paralympic Games, my third (long jump) gold medal," Rehm said.

"It's great to be able to bring it back and celebrate with my beloved people back home."

France's Dimitri Pavade took silver with a jump of 7.39 and American Trenten Merrill bronze with 7.08.

The 33-year-old Rehm, whose right leg was amputated below the knee, came into these Paralympics as one of the biggest stars in the world of Para sports.

Rehm, whose nickname comes from the bladed prosthetic leg that he springs off, set a world record for his category of 8.62 in June. The men's gold medal won by Miltiadis Tentoglou of Greece at the Tokyo Olympics required a leap of 8.41.

"I knew the track was really fast and you could jump long distances, but, unfortunately, it didn't work out for me like I expected."

"Maybe we can attack the 8.62 (Para world record) another time."

Ahead of the Tokyo Games, Rehm attempted to compete alongside able-bodied athletes in hopes of completing an unprecedented Olympic-Paralympic gold double.

He was prevented from competing in the Olympics in Tokyo, as he was at the Rio de Janeiro Games.

He lamented the lack of competition in his category in Tokyo, saying it was part of the reason he was looking to compete at both games.

"It would be good to have it and that is one reason why I tried to compete at the Olympic Games," he said.

"But, there is no excuse. I shouldn't blame myself too much as winning the gold medal was quite nice."