Fighting in his first tournament as grand champion, Terunofuji improved to 2-0 by crushing out No. 1 maegashira Hoshoryu, nephew of former yokozuna Asashoryu, in the final bout of Day 2 at Ryogoku Kokugikan. 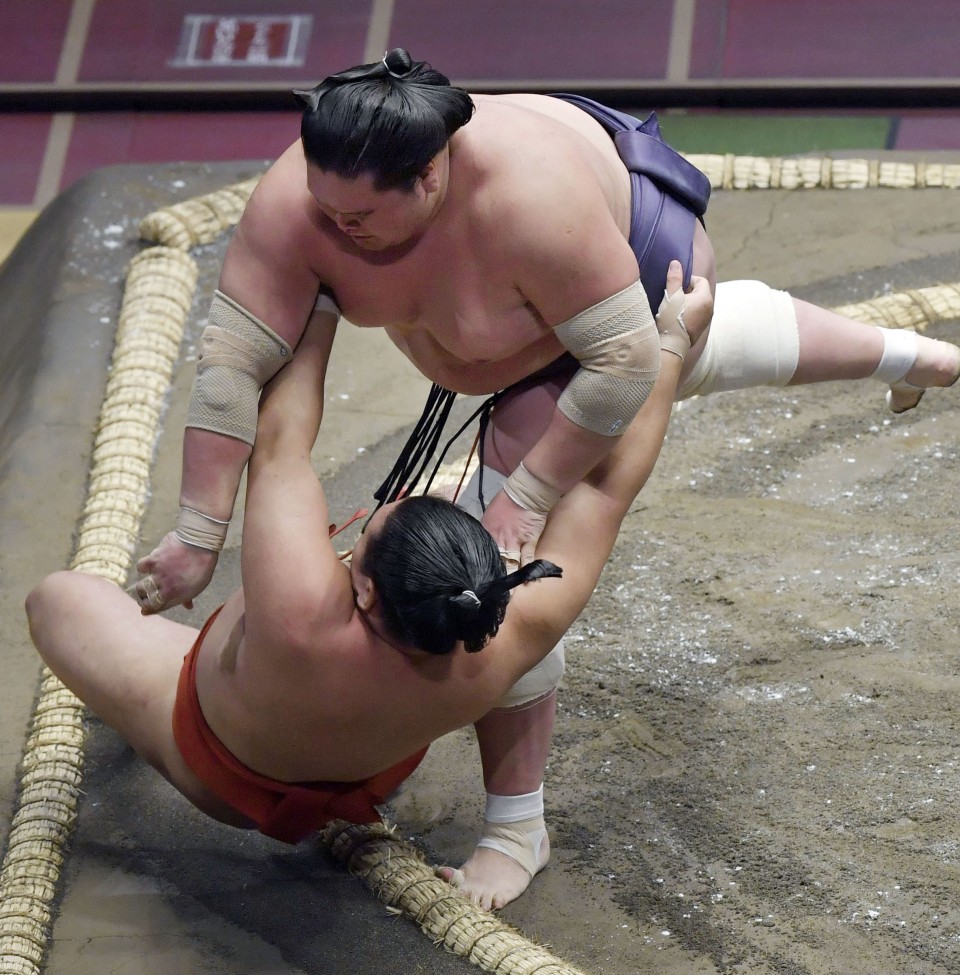 Terunofuji overpowers Hoshoryu on the second day of the Autumn Grand Sumo Tournament at Ryogoku Kokugikan in Tokyo on Sept. 13, 2021. (Kyodo)

Gaining the momentum at the jump, Terunofuji took Hoshoryu to the edge, but needed to block an attempted counterattack throw before toppling the talented youngster, who started the meet with an impressive win against ozeki Shodai.

With all-time championship record-holder Hakuho unable to compete due to a coronavirus outbreak at his stable, Terunofuji is strongly favored to win the 15-day tournament as the sole grand champion in the field.

Victory in his yokozuna debut would continue the remarkable comeback story for the Mongolian-born powerhouse, who has overcome a raft of debilitating injuries and is fighting in his first meet since taking Japanese citizenship.

Following an opening-day loss to Hokutofuji, Takakeisho was bundled out by the other No. 2 maegashira, Kiribayama. 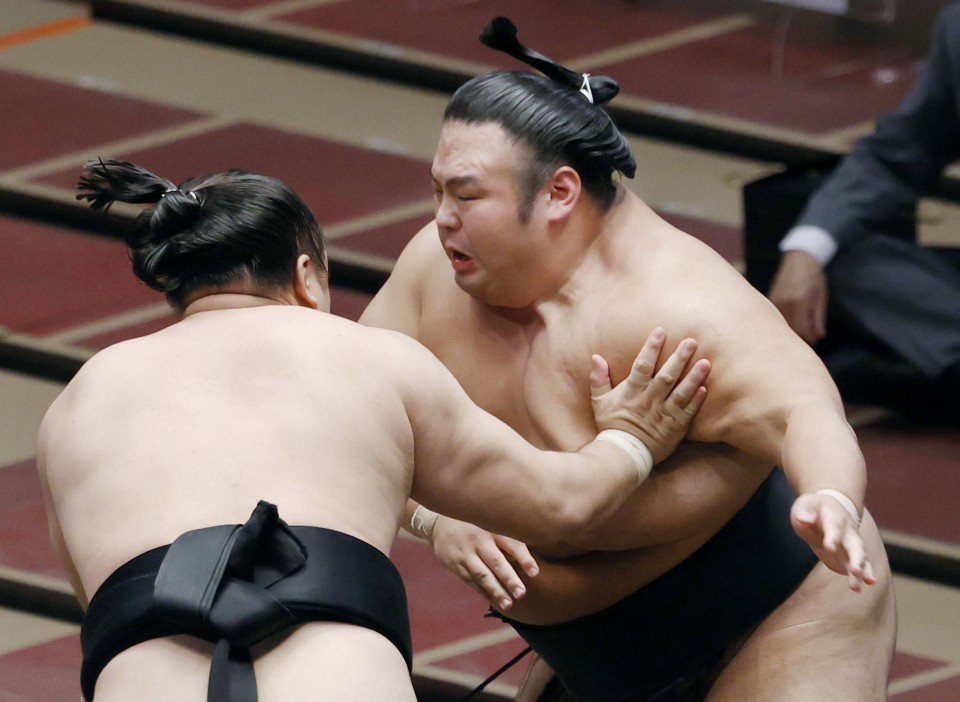 Takakeisho (R) takes a shove from Kiribayama on the second day of the Autumn Grand Sumo Tournament at Ryogoku Kokugikan in Tokyo on Sept. 13, 2021. (Kyodo)

Fighting as a demotion-threatened "kadoban" ozeki following his withdrawal in July due to a neck injury, Takakeisho lacked power behind his opening charge and gave little resistance as Kiribayama (2-0) pushed his way to victory.

"I was able to move straight forward and push him out. My opening charge wasn't particularly strong, but I went with the flow," said Kiribayama, who hopes for his first promotion to the three "sanyaku" ranks below yokozuna.

"I practiced diligently prior to the tournament. I have my sights set on the sanyaku."

Shodai (1-1) bounced back from his opening-day loss, winning in ugly but effective fashion against komusubi Takayasu, who dropped to 0-2.

With neither able to gain a belt grip from the jump, the two were locked in a long stalemate until Shodai made his move and pushed Takayasu out.

Sekiwake Mitakeumi (1-1) became the second sanyaku wrestler to fall victim to Hokutofuji (2-0), who sidestepped the two-time grand tournament winner and sent him stumbling over the edge.

New sekiwake Meisei (0-2) continued his rough start at the sport's third-highest rank, getting pushed down by No. 1 Takanosho (1-1), who is seeking to return to sanyaku.

The Japan Sumo Association is limiting attendance at Ryogoku Kokugikan to 5,000 spectators, around half capacity, while Tokyo and other parts of the country remain under a state of emergency to combat the spread of the coronavirus.