Yu Darvish pitched 5-1/3 innings in a no-decision Thursday afternoon and the San Diego Padres snapped a five-game losing skid by defeating the San Francisco Giants 7-6 on a walk-off run.

Darvish gave up four runs and three hits, including a two-run homer to Mike Yastrzemski in the second inning, while striking out seven and walking three in front of 31,049 fans at Petco Park. 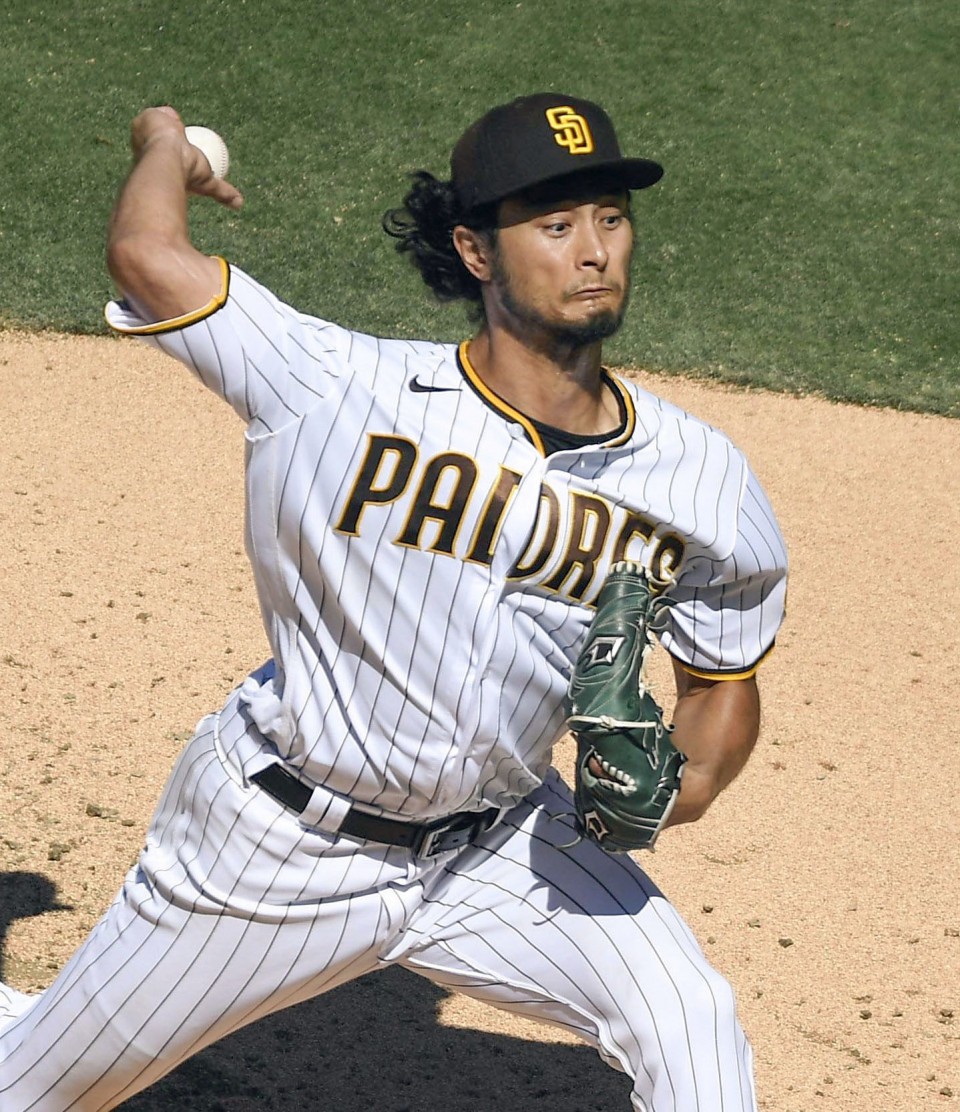 Yu Darvish of the San Diego Padres pitches against the San Francisco Giants in San Diego on Sept. 23, 2021. (Getty/Kyodo)

Victor Caratini's infield single in the 10th inning off Dominic Leone (3-5) avoided a sweep by the Giants in the Padres' final homestand of the season.

Darvish ran into trouble in the top of the sixth. The Japanese right-hander left the game with one out and runners on first and second, to a standing ovation in what will be his final home start of the year.

"I did the minimum work required of a starter (by setting the pace of the game)," Darvish said.

"Last time they took advantage of my breaking pitches so I was careful with how I used them. My fastballs, two-seamers, splitters, they were all effective," he said.

Tim Hill entered the game and immediately surrendered a go-ahead, three-run homer to Austin Slater, erasing a solid start from Darvish. The Giants rallied against Pierce Johnson in the top of the seventh to tie the game at six.

With one out and runners on second and third in the bottom of the 10th, Caratini lined a grounder up the middle and Jurickson Profar broke for home.

At Oakland Coliseum in California, Yusei Kikuchi did not factor into the decision in the Seattle Mariners' 6-5 victory over the Oakland Athletics.

Kikuchi, who has not won a game since Aug. 3, allowed three earned runs on three hits and four walks across just three innings in his 29th start of the season.

"I blame myself for the walks that led to runs," Kikuchi said.

"My pitches had good velocity, but I pitched behind the count against good hitters and paid the price. The team has been on a winning streak but I haven't been doing my job. It's frustrating."

Luis Torrens hit a go-ahead, two-run homer off Jake Diekman (3-3) in the sixth and the Mariners completed the franchise's first-ever four-game road sweep of the Athletics. Joe Smith (3-4) pitched a scoreless inning of relief to get the win.

At Angel Stadium, also in California, Shohei Ohtani went 0-for-1 with three walks, a run scored and a stolen base -- his 24th of the season -- as the Los Angeles Angels beat the Houston Astros 3-2 to salvage the finale of a four-game series.

Ohtani reached base on a walk, stole second and scored the go-ahead run on a Jack Mayfield double in the sixth. On Wednesday, Ohtani, who hit his 45th homer on Tuesday, was walked four times, with two of the four free passes being intentional.