The Japan captain struck from a corner kick in the 32nd minute at Stadio Luigi Ferraris, leveling the score at 1-1 after Federico Dimarco had put the visitors ahead with a thumping free kick.

Lautaro Martinez restored Inter's lead on a counterattack on the stroke of halftime before Sampdoria defender Tommaso Augello volleyed home after the break. 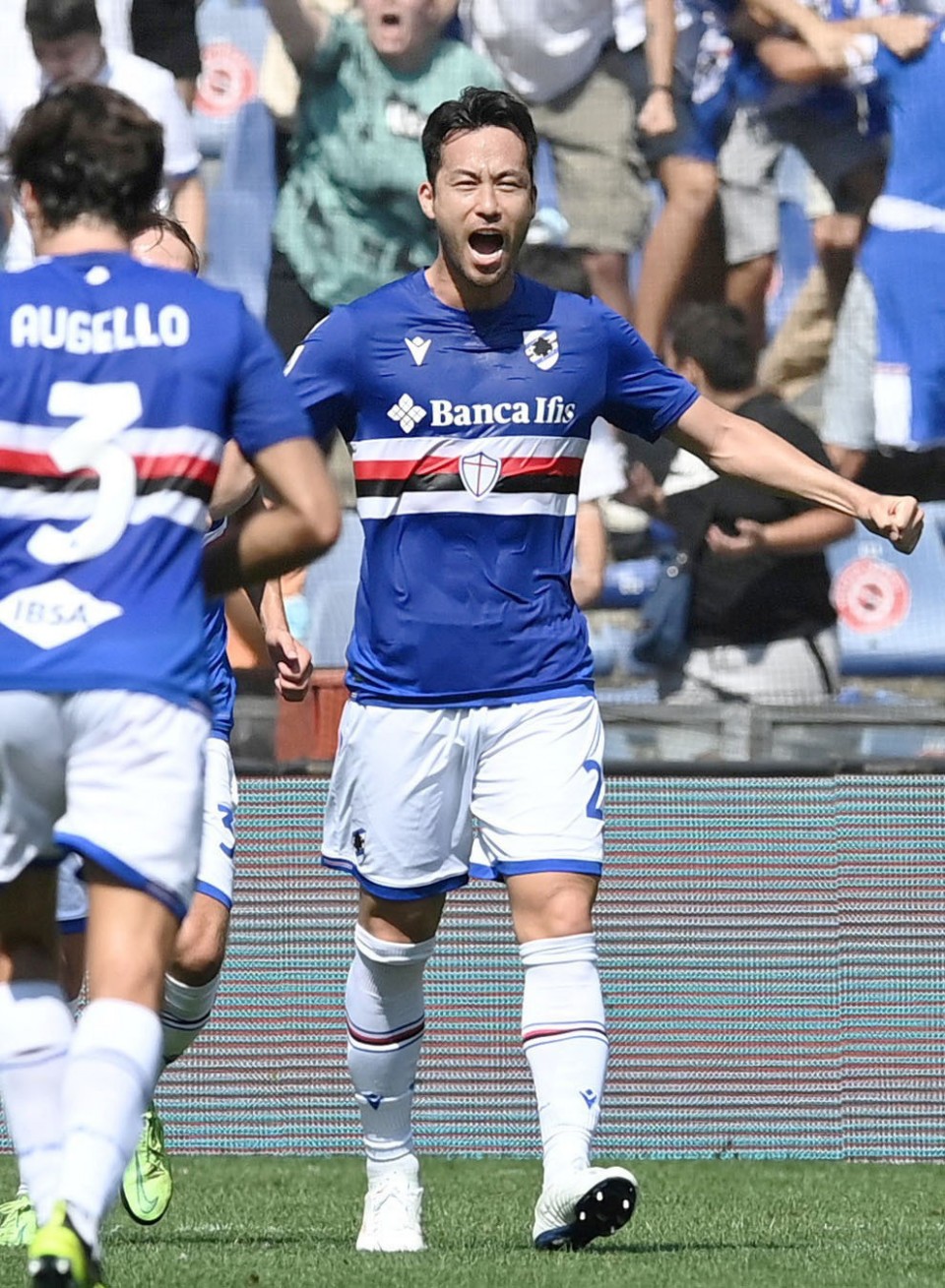 Maya Yoshida of Sampdoria (R) celebrates after scoring in a 2-2 draw against Inter Milan in the Serie A in Genoa, Italy on Sept. 12, 2021. (Kyodo)

Yoshida, whose close-range shot deflected off a defender, said the result was a much-needed boost for Sampdoria following a loss and scoreless draw to open the season.

"Maybe it wasn't pretty, but it was an important goal for me personally and for the team," said the 33-year-old center-back, who captained Japan in a pair of World Cup qualifying matches during the recent international break.

"It was tough as I've just returned from playing for the national team in Japan and Qatar, but I'm always focused," he said.

Masaya Okugawa opened his season's account in the German Bundesliga, netting an equalizer for Arminia Bielefeld on the stroke of halftime in a 3-1 defeat at Borussia Monchengladbach.

Okugawa tucked in the rebound from close range after his initial effort was denied by the keeper. Lars Stindl headed in his second goal of the game and Denis Zakaria also netted after the break for the home side, however, leaving Bielefeld without a win in their first four games.

In the Belgian top flight, Japan winger Kaoru Mitoma made his debut as a late substitute for Royale Union Saint-Gilloise, who held on for a 1-1 draw away to Genk after playing the last 18 minutes with 10 men.

The former Kawasaki Frontale star made an impact in his limited time off the bench, breaking into the box and creating a chance against a Genk outfit featuring fellow Samurai Blue winger Junya Ito.

"I still need to improve the quality of my finishing," Mitoma said.

The 24-year-old, on loan from English Premier League side Brighton, said he is relishing his introduction to European football since transferring from Kawasaki last month.

"I can only speak a little English, but I can understand it. The atmosphere is fantastic," he said.