One month into power in Afghanistan, the Taliban have begun showing signs reminiscent of their previous rule under which priority was given to governance based on Islamic law and women were repressed.

What has emerged so far in an interim government launched by the Taliban is far from the kind of "inclusive" government the international community had hoped to see, which would include members of ethnic minorities and women. 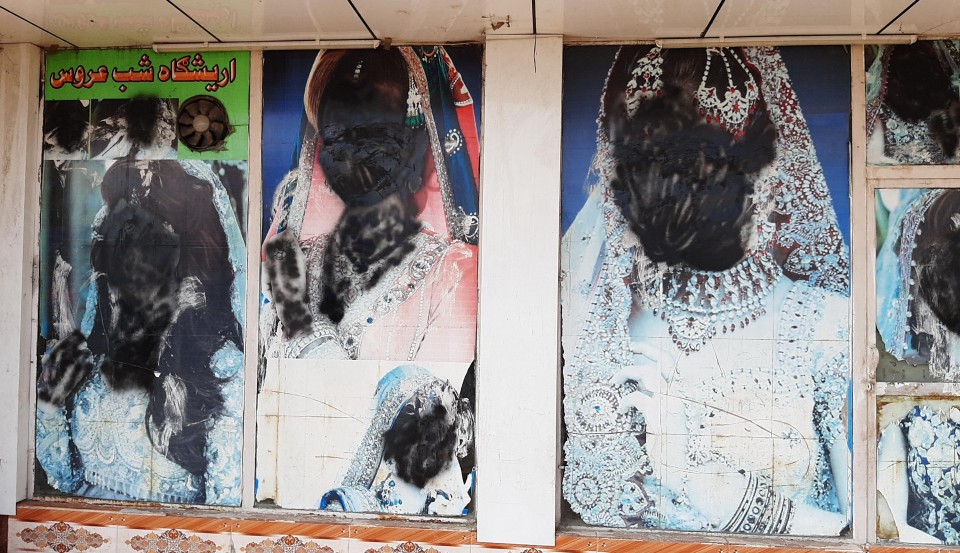 Afghan beauticians in Nangarhar, Afghanistan, paint over large photos of women on the doors of beauty salons on Sept. 9, 2021, after Taliban gained control across the country. (Anadolu Agency/Getty/Kyodo)

Whether world powers and others would formally recognize the new government remains an open question. There are concerns that Afghanistan might be left isolated, and that a humanitarian crisis and chaos would deepen there.

At a news conference on Tuesday, Foreign Minister Amir Khan Muttaqi expressed appreciation for $1.2 billion pledged internationally for humanitarian aid to Afghanistan at a donors conference in Geneva.

He said the government will ensure the aid gets delivered to the people.

Foreign governments are watching closely how the Taliban would handle education, culture and the rights of women. Last time they were in power from 1996 to 2001, women and girls were denied an education.

Higher Education Minister Abdul Baqi Haqqani said Sunday that while women can receive education in universities, classrooms will be segregated between men and women, and women will be required to wear hijabs, head coverings.

A senior Taliban official has told foreign media that women will not be allowed in sports in which face and body would not be covered.

Afghan women, holding placards, gather to demand the protection of Afghan women's rights in front of the Presidential Palace in Kabul on Aug. 17, 2021. (Anadolu Agency/Getty/Kyodo)

Taliban sources told Kyodo News that the Hadith, or a collection of sayings of the Prophet Muhammad, could become a compulsory subject in school, and that the Taliban are considering banning higher education in music, which their previous government had banned.

Amid concern that the Taliban would bring back the brutal rule which they were known for, the group promised to launch an inclusive government after they seized control of the country in mid-August.

But the lineup of the interim government announced on Sept. 7 consisted mostly of Pashtuns, the dominant ethnic group within the Taliban.

The post of interior minister went to Sirajuddin Haqqani, a hard-line Taliban official who heads the Haqqani Network, a militant group labeled by the United States as a terrorist group.

The developments have raised alarm in foreign governments that want to avoid seeing Afghanistan revert to being a breeding ground for terrorism.

The Taliban have also deemed it necessary to obtain permission before a demonstration is held in support of opposition forces, while providing security personnel to street activities held to show support for the Taliban.

High Commissioner for Human Rights Michelle Bachelet on Monday expressed disappointment with the acting government on the grounds that it has failed to represent all Afghans.

Also Monday, the United Nations held a ministerial-level donors conference for Afghanistan and pledges made then exceeded the amount sought by the world body. The United Nations had said about $606 million would be necessary by the end of this year.

But countries that took part in the meeting made a point of needing to provide the money not directly to the Taliban but to the people of Afghanistan through international organizations and aid agencies.