FOCUS: Osaka back to defend U.S. Open title after year of protest, privacy

As she returns to the courts of the Billie Jean King National Tennis Center in New York for a shot at defending her U.S. Open title, Naomi Osaka is coming off a year in which she has greatly amplified her voice on social issues, having taken a stand against racism and opened up about her mental health struggles.

"Definitely in New York last year, the biggest goal for me was just to push that (racial justice) message across, and I feel like I did well there," said the 23-year-old Osaka, who was born in Japan to a Haitian father and a Japanese mother and raised in the United States, in remarks to the press ahead of the 2021 tournament. 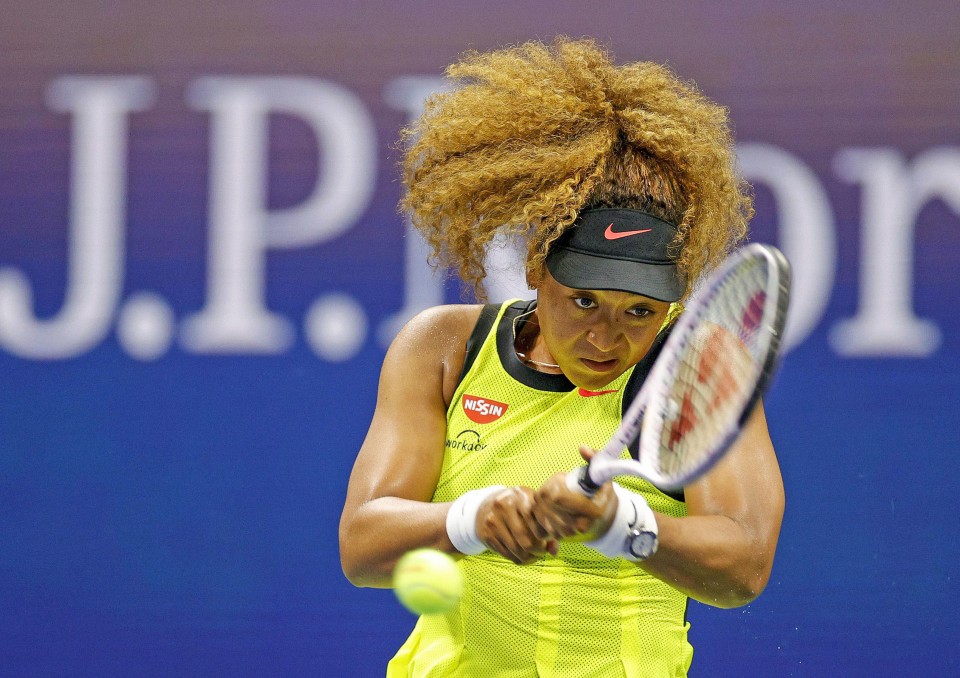 Naomi Osaka of Japan returns a shot during her women's singles first round match against Marie Bouzkova of the Czech Republic at the U.S. Open in New York on Aug. 30, 2021. (Getty/Kyodo)

The No. 3 seed also admitted there were "a lot of things that I did wrong" in coping with depression and anxiety earlier this year, taking steps that resulted in her withdrawal from the French Open in May, but defended herself as a person who lives "in the moment" and added, "I don't necessarily think that's a bad thing."

At last year's tournament, Osaka drew attention to U.S. racial justice protests by wearing a facemask with the name of a different black victim of police or vigilante violence to each of her seven matches through the final -- honoring, in all, Breonna Taylor, Elijah McClain, Ahmaud Arbery, Trayvon Martin, George Floyd, Philando Castile and Tamir Rice.

"I think that she's very, very brave," said Wanda Cooper-Jones, 49, mother of the late Arbery, in a recent phone interview with Kyodo News. "That she chose to wear their names, to display their names. It shows that she cares about what's actually happening in this world today."

Cooper-Jones said she was "very appreciative" of the gesture and described it as "overwhelming" to see Osaka's facemask with the name of her son, who was killed on Feb. 23, 2020, after being pursued by armed white men, including a retired police officer, while out for a jog near his home in Georgia.

"(Osaka) understands what we as the people in the U.S. are going through when it comes to hate crimes and police brutality," she added. "She wants change just like all of us do."

The former world No. 1 initially ramped up her public support for the Black Lives Matter movement last summer following the killing of Floyd by a white police officer later convicted of murder in the case.

Saying she felt a "call to action" after seeing a viral video of the officer kneeling on the black man's neck for an extended period, Osaka traveled to Minnesota to visit a memorial to Floyd and join protests for racial justice and policing reforms.

Amid further unrest in late August 2020 over the severe wounding of Jacob Blake, a black man shot in the back multiple times by a white police officer in Wisconsin, a number of wildcat strike actions swept through U.S. professional sports, resulting in postponements across top leagues such as the NBA and MLB as athletes refused to play.

Osaka showed solidarity at the time by announcing she would sit out her semifinal match at the Western and Southern Open, tweeting as part of her statement, "Before I am an athlete, I am a black woman." Organizers ended up shelving all the day's matches in support of the protests and resuming with Osaka back in competition the following day.

Capping off her racial justice gesture at the U.S. Open weeks later, Osaka reached the final and came back from a set and a break down to defeat Victoria Azarenka of Belarus in a stadium emptied of fans amid the ongoing coronavirus pandemic.

Later in the year, Osaka was named by Time magazine as among the world's 100 Most Influential People of 2020 and took to the pages of the New York Times with a December op-ed encouraging athletes to speak out on social issues.

She went on to capture her second Grand Slam in a row and fourth overall by winning the 2021 Australian Open, and received the Laureus World Sportswoman of the Year Award in May with recognition for her activism.

But even as her efforts have been widely embraced, the work required to make political messaging part of an athletic career can take a toll, according to Courtney Cox, an assistant professor at the University of Oregon whose research addresses identity and labor in sports.

"These sacrifices, these moments to have a 'message' will sometimes cost our health, our peace," Cox said in an email to Kyodo News.

In the months before the Tokyo Olympics, Osaka spoke up about mental health issues after an initial decision to avoid press conferences ended with her withdrawing from the French Open in the second round and skipping Wimbledon altogether.

Citing "long bouts of depression" since becoming a public figure, she explained her refusal to speak with media at Roland Garros -- for which organizers fined her $15,000 and threatened disqualification -- as a step taken to preserve her mental health during a difficult time.

"I think that we only have Naomi Osaka at her fullest potential (and longevity!) both on and off the court if she is able to block out anything that isn't serving her," Cox said.

Concerning the battle, often greatly intensified by fame, to preserve parts of ourselves that "cannot be seen, commodified, taken up," Cox added, "I think she is offering us a blueprint that is trying to find some semblance of balance."

Osaka reflected in a social media post on lessons learned over the past year, upon returning to New York for the U.S. Open, where she seeks to regain her winning form after falling short of the quarterfinals in her Olympic debut.

Calling herself "extremely self-deprecating," the tennis phenom vowed to try to see herself in a more positive light, saying "I can't burden myself with (other people's) expectations anymore."

"Seeing everything that's going on in the world I feel like if I wake up in the morning that's a win," she said.