Nagoya Mayor Takashi Kawamura, who has faced a barrage of criticism for suddenly biting an Olympic softball player's gold medal last month, on Wednesday tested positive for the coronavirus, the local government said.

Kawamura, who had apologized for the medal-biting incident that went viral on social media, took the polymerase chain reaction test after his secretary was found to have been infected with the virus on Sunday, according to Nagoya city officials. 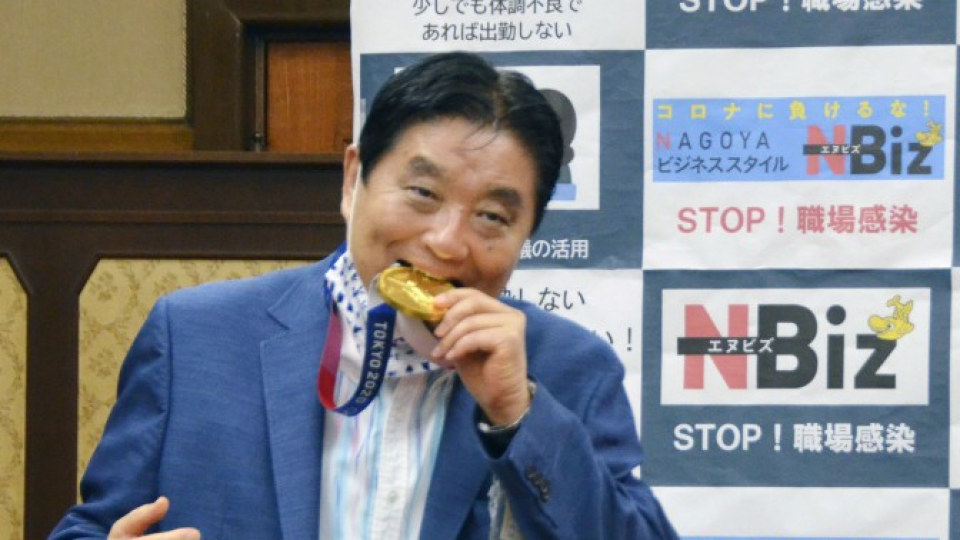 The 72-year-old mayor has not developed any symptoms and is resting at home, with his official duties delegated to other officials. He had received his second shot of the coronavirus vaccine in early July.

"Coronavirus is striking fury in a way never before seen, but we will all work together to ensure there is no interruption in running the city," said the mayor in a statement.

Kawamura recently made headlines over the medal-biting stunt which occurred when he was visited by Miu Goto, a member of the Japanese women's softball team at the Tokyo Olympics who hails from the central Japan city in Aichi Prefecture, on Aug. 4.

When the pair posed for photos during Goto's visit to the city hall, Kawamura gestured for her to place the medal around his neck and, taking off his mask, bit it -- copying a gesture often made by medal-winning Olympians.

His action has drawn flak for "lacking respect" for the athlete and being "insensitive" amid the coronavirus pandemic. Following the incident, he offered to forfeit three months' pay totaling 1.5 million yen ($13,500).

The announcement of Kawamura's infection came as Aichi reported 1,876 new COVID cases on Wednesday, with its cumulative tally reaching 85,585, according to the prefectural and city governments.

Meanwhile, daily coronavirus cases in Osaka Prefecture in western Japan logged a record of 3,004 cases the same day, marking the first time they have topped 3,000.

Rising cases have prompted Osaka Gov. Hirofumi Yoshimura to announce that the government will start a facility designed for patients with severe symptoms on Sept. 16, earlier than its initial schedule in October.

The number of daily infections in Tokyo reached 3,168 cases Wednesday. The seven-day rolling average in the capital stood at 3,369.3 per day, down 24.6 percent from the previous week.