The objective was to strike a target area 800 kilometers off North Korea's east coast, according to the Korean Central News Agency. Japan said the two missiles flew around 750 km before falling into the sea within its exclusive economic zone, in the first launches of ballistic missiles by North Korea in nearly six months.

The missiles launched Wednesday are regarded as an updated version of the KN-23, a new type of short-range ballistic missile known to fly on an irregular trajectory. It is similar to an advanced ballistic missile manufactured in Russia, military experts said. 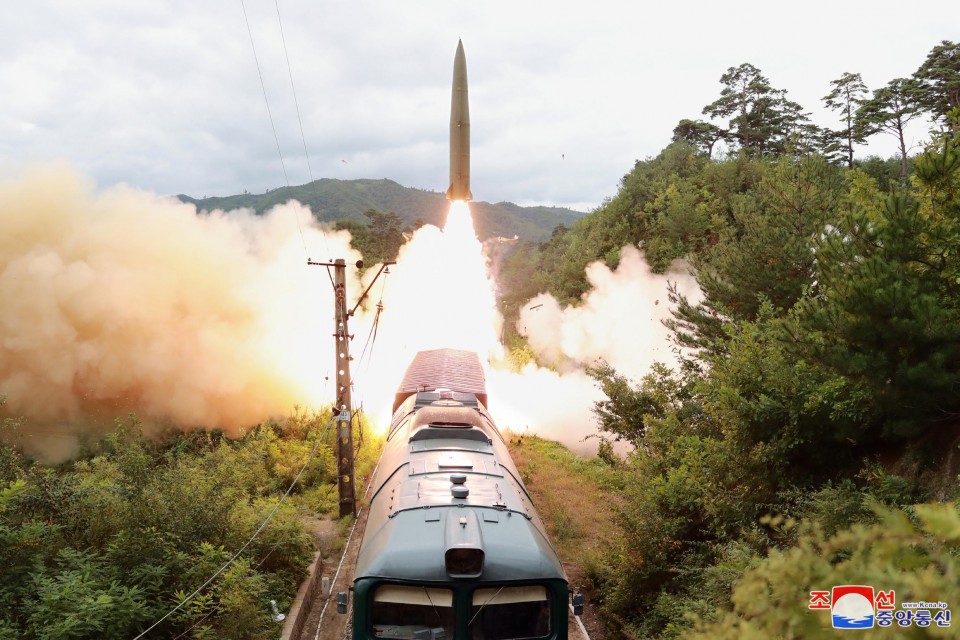 Pak Jong Chon, a close aide to North Korean leader Kim Jong Un, observed a firing drill by a railway-borne missile regiment on Wednesday, the news agency said. He was reportedly promoted to the Politburo of the Central Committee of the ruling Workers' Party of Korea earlier this month.

"The railway-borne missile system serves as an efficient counter-strike means capable of dealing a harsh multi-concurrent blow to the threat-posing forces through separate performances of firepower duty in different parts of the country," KCNA said.

But the experts said it is uncertain whether the missile system will actually work well as train tracks in North Korea have become decrepit and a railcar carrying a ballistic missile may be unable to run at high speed.

Moreover, the latest test would help the United States and other nations detect where North Korea might launch a ballistic missile, they said. Washington and Seoul are expected to scrutinize the railway network in the country ahead.

The online edition of the Rodong Sinmun, the ruling party's newspaper, on Thursday ran photos of a missile fired from a train.

Japan's top government spokesman said the missiles appear to have been solid-fueled and that they resembled the short-range ballistic missiles North Korea test-fired in May 2019, referring to the KN-23.

At a press conference in Tokyo, Chief Cabinet Secretary Katsunobu Kato condemned the launches as a "grave threat to our nation's security" and voiced "deep concerns" about the risk to air and marine traffic in the area.

Takehiro Funakoshi, head of the Japanese Foreign Ministry's Asian and Oceanian Affairs Bureau, and his South Korean counterpart Lee Sang Ryol, who is visiting Tokyo to discuss bilateral issues, affirmed in their meeting Thursday the importance of close cooperation among Tokyo, Seoul and Washington to ensure peace and stability in the region, the ministry said.

Wednesday's test came after North Korea's state-run media said Monday that the country over the weekend had tested a new long-range cruise missile capable of reaching Japan, where tens of thousands of U.S. troops are stationed.

Kim may also be hoping that by demonstrating the nation's missile technologies he can bring the administration of President Joe Biden to the negotiating table to discuss sanctions relief, they added.

South Korea successfully test-launched the newly developed missile from a submarine underwater on Wednesday, its presidential office said just hours after the North's ballistic missile launches, drawing a swift condemnation from the North.

North Korea has acknowledged that it has been facing a severe food crisis against a backdrop of natural disasters and sluggish trade activities with China, its closest and most influential ally in economic terms, in the aftermath of the emergence of the COVID-19 pandemic.

Direct talks between the United States and North Korea have been at a standstill for about two years, with the Biden administration unlikely to readily make concessions over denuclearization and sanctions relief.

North Korea has expressed unwillingness to hold bilateral negotiations with the United States unless Washington withdraws what Pyongyang considers to be its hostile stance. The two countries have no diplomatic relations.

North Korea's economy, meanwhile, has been languishing further, raising concern that its citizens may be struggling to obtain daily necessities including food.

Given the circumstances, Kim Jong Un is believed to be keen to see the United States ease economic sanctions that have been imposed to thwart Pyongyang's ballistic missile and nuclear ambitions.