Shohei Ohtani hit his 45th home run of the season on Tuesday night to keep the MLB home run race tight, but the Los Angeles Angels were overpowered by the Houston Astros 10-5.

Ohtani hit his first homer in 10 games, driving a solo shot off Cristian Javier 445 feet (136 meters) into the elevated right field stands at Angel Stadium and trimming Houston's lead to five in the eighth inning. He went 2-for-4 with two runs scored. 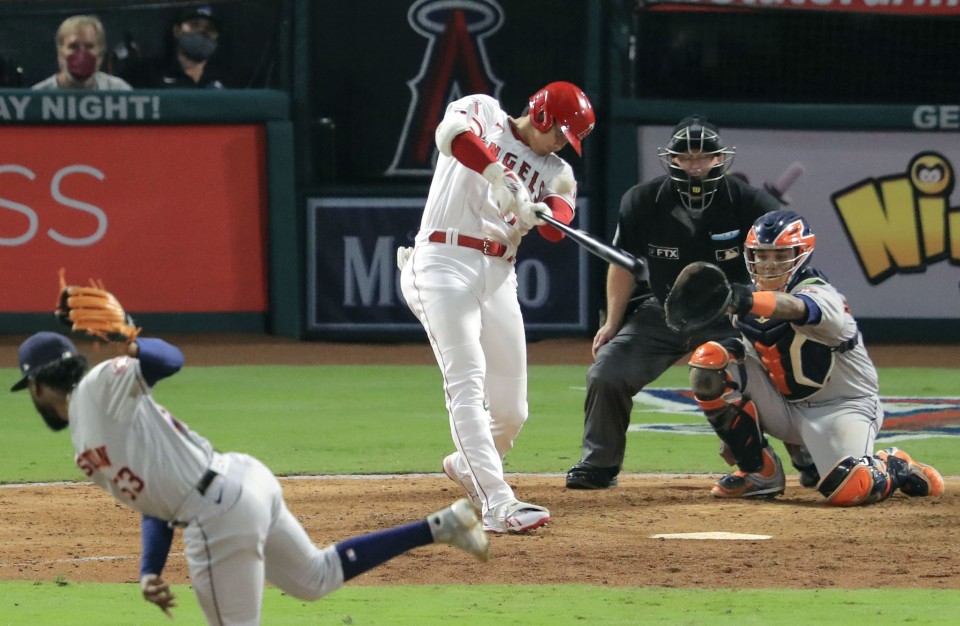 Shohei Ohtani of the Los Angeles Angels hits a solo home run in the eighth inning off Cristian Javier of the Houston Astros on Sept. 21, 2021, at Angel Stadium in Anaheim, California, his 45th homer of the season. (Kyodo) ==Kyodo

Angels manager Joe Maddon said the home run was not the only good sign that Ohtani is getting better swings again.

"If you chopped that up a bit you might get two or three (home runs) out of that," Maddon said. "I thought the previous at-bat, the line drive to right field was also good. He hit some fly balls to the opposite side of the field which is also good. He's fine."

"It's all going to come down to whether he keeps a finite strike zone."

The 27-year-old Japanese has only three homers in September, but he is just one behind the Toronto Blue Jays' Vladimir Guerrero Jr. and the Kansas City Royals' Salvador Perez for the major league lead. Tuesday's homer was Ohtani's first since Sept. 10.

Asked if there was a chance Guerrero or Perez might pip Ohtani by hitting more home runs, Maddon said of Ohtani who has also won nine games as a starting pitcher, "I think everybody (else) is in second, third, fourth place or fifth place."

The Angels were unable to snap their losing skid at home and lost their fifth straight game.

But Ohtani provided fans with a bright spot as he tied for the second-most homers in a single season by an Angel, matching Mike Trout's 2019 total. Only Troy Glaus, who hit 47 in 2000, has more.

The Astros capitalized against the Angels' shaky bullpen and built a 10-1 lead in the sixth, having knocked out Angels starter Packy Naughton (0-3) after four innings. Jose Urquidy (8-3), who gave up a three-run homer to Phil Gosselin in the sixth, earned the win.

Ohtani singled and scored in the sixth.

Kyle Tucker and Aledmys Diaz hit back-to-back homers in the second inning and drove in three runs apiece for the visitors, who routed the Angels 10-0 on Monday. Jose Altuve and Martin Maldonado also homered.