Singapore is reimposing restrictions on social gatherings and ordering employees to work from home after an upsurge in coronavirus infections that threatens to overwhelm the health care system, the government said Friday.

With more than 1,000 new COVID-19 cases daily, the Health Ministry said the number of people allowed to dine-in at food establishments or to gather socially will be reduced to two from next Monday, instead of the current limit of five.

The government is also asking workers to revert to working from home even though it had started to relax restrictions last month by allowing half of employees to work on-site. 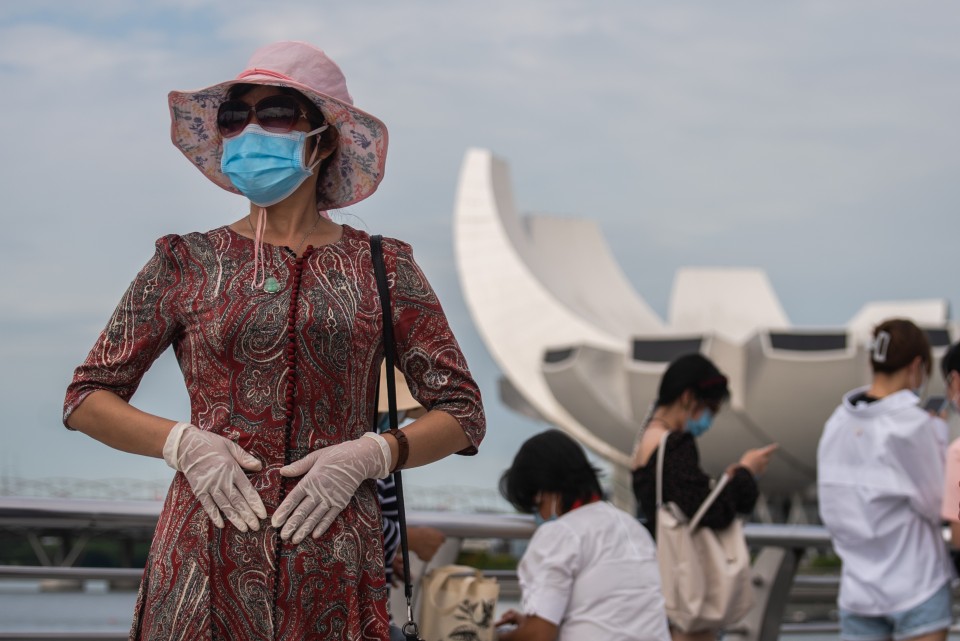 A woman is seen wearing two masks and gloves at Singapore's Marina Bay on Aug. 1, 2021. (NurPhoto/Getty/Kyodo)

"We will go back to work-from-home as default," Finance Minister Lawrence Wong told a virtual news conference along with other members of a multi-ministry task force set up to combat COVID-19.

The number of coronavirus infections reported daily has risen above 1,000 since the middle of this month, with 1,504 cases reported on Thursday, a number which the wealthy city-state of about 5.7 million people had not seen during the pandemic.

The number of fatalities has also increased, with one or two deaths reported every other day, raising the death toll from COVID-19 related complications to 70.

The government is concerned that the number of new infections could double to about 3,200 daily within the next two weeks, which is expected to put a heavy strain on the healthcare system.

"I share Singaporeans' disappointment on these new restrictions. We had hoped to have all these restrictions behind us especially with our high vaccination rates and our plans to move forward to a COVID-19-resilient nation," Wong said.

"But the reality is that with the current infection trajectory, our health care system and our health care workers are facing many pressures, and that's why we had to make this very difficult decision to apply some brake and to slow down the rate of transmission," he said.

Currently, 82 percent of Singapore's population has received two doses of COVID-19 vaccine, one of the highest rates in the world.

The government said it is still committed to its earlier announced plans to reopen the economy by learning to live with COVID-19 as an endemic reality.

The city-state, which is highly dependent on travel, tourism and trade, has been working aggressively to establish special travel lanes with other countries for vaccinated people, starting with Germany and Brunei, which were recently announced.