The average price of land in Japan as of July 1 fell 0.4 percent from the previous year for the second consecutive year of declines amid the prolonged coronavirus pandemic, government data showed Tuesday.

But the margin of decline narrowed from 0.6 percent last year, with demand for residential land slightly improving. Reflecting a drop in demand for hotels and shops due to the pandemic, prices of commercial land decreased, according to the data released by the Ministry of Land, Infrastructure, Transport and Tourism. 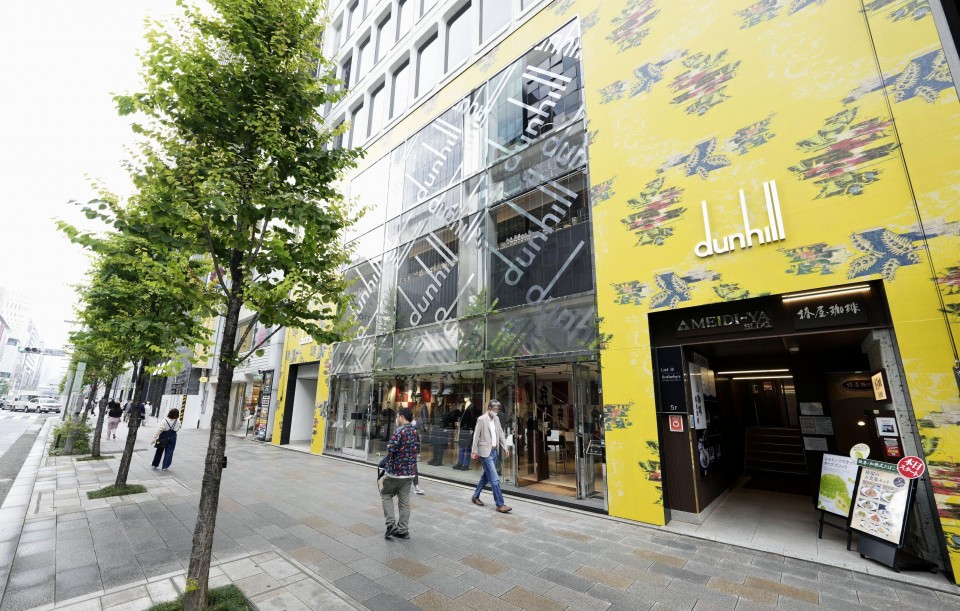 Photo taken on Sept. 11, 2021, shows the Meidi-ya Ginza commercial building in Tokyo's Ginza shopping district, where the highest land price per square meter in Japan was recorded for the 16th consecutive year. (Kyodo)

In Japan's three largest metropolitan areas -- Tokyo, Osaka and Nagoya -- the average land price edged up 0.1 percent, while that of the Osaka area only saw declines.

The survey covered the average prices for all types of land nationwide, including commercial, residential and industrial, based on the value of 21,443 sites across the country.

A ministry official said land prices would bounce back from the fall only after COVID-19 subsides and people return to the streets. "We will monitor the influence" of the pandemic, the official said.

The average price of commercial land dropped 0.5 percent from a year earlier, a sharper decrease than 0.3 percent last year, and 41 of the country's 47 prefectures saw declines, compared with 36 prefectures in the previous year.

By region, average commercial land prices fell in the Osaka area for the first time in nine years, with the Dotonbori district in western Japan's Osaka city plunging 18.5 percent, the largest drop among commercial land nationwide, the data showed.

The Nagoya area in central Japan posted a rise in average commercial land prices, improving from a decline last year, while the Tokyo region as well as the cities of Sapporo, Sendai, Hiroshima, and Fukuoka continued to see increases in their commercial land prices due partly to urban redevelopment projects.

The average price of residential land nationwide dropped 0.5 percent from a year earlier, slowing from a 0.7 percent decrease last year. In total, 38 prefectures saw their residential prices fall, compared with 42 the previous year.

Housing demand sustained by low-interest rates has been firm since even before the pandemic, pushing up residential land prices near train stations and elsewhere.

In the Tokyo and Nagoya regions, residential land prices marked rises on the year, compared with declines logged the previous year, while the average price in areas outside the three largest metropolitan areas fell 0.7 percent, with the margin of decline narrowing from a year before.

Among the surveyed sites, the island city of Miyakojima, Okinawa Prefecture, recorded the highest price rise for residential land of 22.9 percent, boosted by resort development.

The steepest fall of 19.2 percent in residential land prices was logged in Kuma village in Kumamoto Prefecture, southwestern Japan, which was hit by a flood in July 2020.

Industrial land prices rose for the fourth straight year, led by brisk demand for logistics facilities due to expansion of online shopping amid the pandemic.

Land where the Meidi-ya Ginza commercial building stands in Tokyo's Ginza shopping district fetched the highest price per square meter for the 16th consecutive year of 39.50 million yen ($361,000), down 1.5 million yen, or 3.7 percent, from 2020.