The use of deaf interpreters as signers in live ceremony broadcasts during the Tokyo Olympics and Paralympics has won plaudits from Japan's deaf community for its innovative approach to the service.

Broadcast via NHK's educational channel, the deaf interpreters, for whom sign language is their first language, were able to convey more detailed and nuanced coverage of the Olympic closing ceremony and Paralympic opening ceremony by communicating information provided to them by signers who can hear.

Deaf viewers of the ceremonies praised them on social media for being "very understandable." They helped viewers "enjoy (the ceremonies) with the entire family," the posts said.

Some experts now expect the more descriptive signing method will be used more regularly in the future. 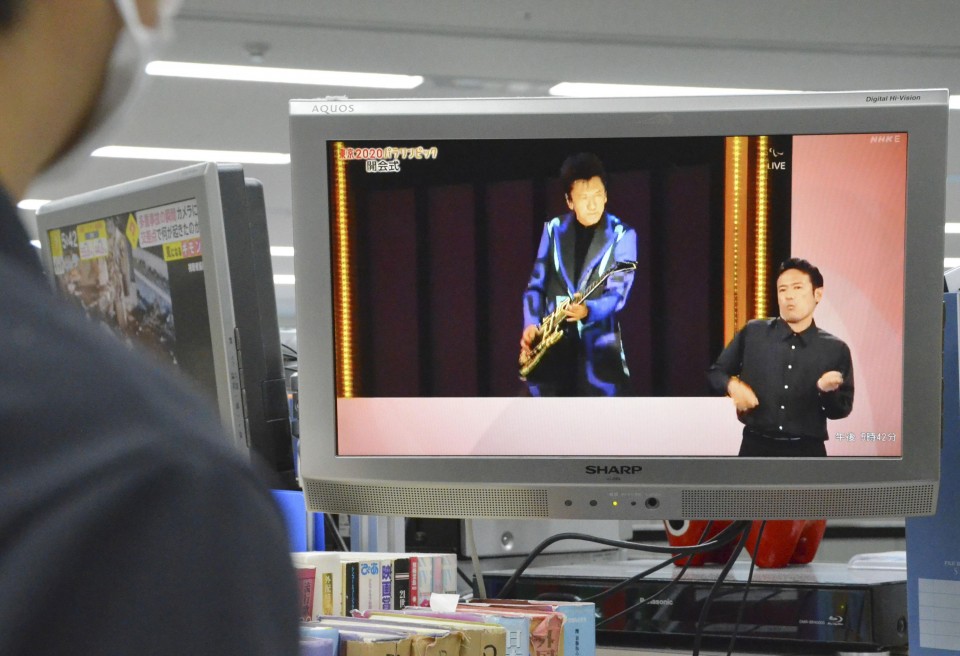 Photo taken Aug. 30, 2021, shows a deaf interpreter appearing on TV as he signs for a live guitar performance during the opening ceremony of the Tokyo Paralympics. (Kyodo)

Kimura, who is deaf herself and works as a newscaster for NHK's Sign Language News 845, says there is a form of sign language mainly used by people without hearing disabilities called Signed Japanese, or Manually Coded Japanese, which is not as widely understood among the hearing-impaired public.

MCJ, based on Japanese word order, uses the signs of the Japanese Sign Language, the predominant form of communication among deaf people in Japan, and has an entirely different structure and grammar from the Japanese language.

With MCJ alone, some deaf people struggle to comprehend due to differences in understanding, depending on their Japanese language proficiency level since Japanese is not their first language.

NHK used sign interpretation in broadcasting the ceremonies in expectation there would be a higher than normal percentage of deaf viewers. Employing deaf interpreters, who rely on the JSL they speak every day, was a game-changer as they utilize the more natural and expressive form of communication.

Specifically, an interpreter without hearing loss, known as a "feeder," formed a team with three deaf interpreters, the former listening to events unfold on TV while simultaneously translating the broadcaster's description to one of the trio, who rotated every 15 minutes to cover the up to three-hour-long ceremonies.

The deaf sign interpreters won praise in messages on Twitter, with many people speaking of their "rich facial expressions." According to Kimura, lip and eyebrow movements, among other facets, are important in the construction of JSL grammar.

Kimura said NHK deserved congratulations for hiring such a well-seasoned group of professionals who demonstrated a high level of concentration in carrying out their role.

The feeders, for their part, not only conveyed the on-the-spot coverage of the announcers but devised ways of augmenting the viewers' experience with detailed information while watching the images of the ceremonies, Kimura said.

The performance during the opening ceremony of the Paralympics by guitarist Tomoyasu Hotei, for example, "expressed an uplifting feeling" to deaf people, although music is alien to them, she said.

Feeders are indispensable when deaf interpreters are involved, but Noriko Miyazawa, 60, a sign language interpreter who also works as a feeder, stressed they must deliver "quick, short, and precise" interpretations.

Although deaf interpreters are active overseas, such as on occasions when the United Kingdom's Queen Elizabeth II delivers an annual Christmas address or for breaking news stories, the practice is still not widely used in Japan.

For the Paralympics' closing ceremony, NHK again used deaf interpreters in broadcasting live via its educational TV channel. But Kimura thinks deaf interpretation could have a much broader impact in society if also used in other areas.

"More deaf interpreters and feeders should be developed so that they can be used in times of disaster and other emergency situations," Kimura said.