As the novel coronavirus pandemic has choked North Korea's trade with its major economic ally of China and natural disasters have devastated the agricultural sector, Kim could try to get closer to Japan to receive aid to rebuild the sluggish economy, analysts said. 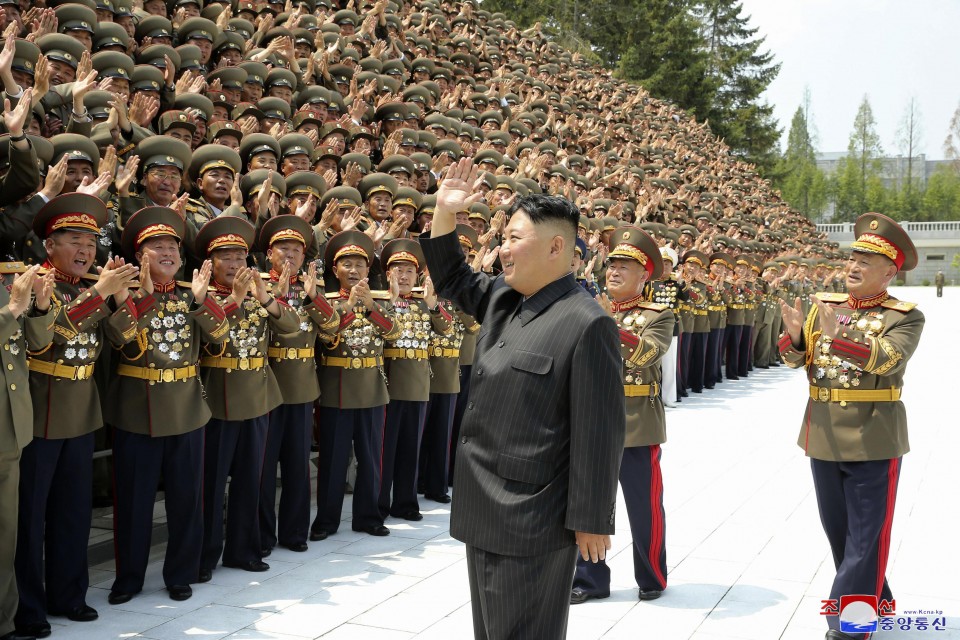 North Korean leader Kim Jong Un waves his hand to the participants in the first workshop of the commanders and political officers of the Korean People"s Army in Pyongyang on July 27, 2021. (KCNA/Kyodo)

While former Prime Minister Shinzo Abe and outgoing Yoshihide Suga have failed to resolve the long-standing issue of North Korea's abduction of Japanese nationals in the 1970s and 1980s, Kishida might grasp a clue to how to negotiate about it with Kim, they added.

Expectations are also rife that Kishida, if he succeeds in alleviating tensions between Tokyo and Pyongyang, could lay the groundwork for the resumption of Kim's talks with leaders of South Korea and the United States, a close security ally of Japan.

The upcoming election of Kishida as Japan's prime minister in parliament "represents both continuity and change in foreign policy towards the Korean Peninsula," said Stephen Nagy, a senior associate professor at International Christian University in Tokyo.

"The Japanese leadership seems to have consensus that meeting Kim Jong Un and speaking with North Korea can accrue some benefit on the sensitive kidnapping issue" but also "in ensuring that Japan is not locked out of the evolution of North Korea and peninsular politics in general," Nagy added.

A diplomat in Beijing echoed the view, saying, "North Korea has been facing a severe economic downturn and it has been really eager to obtain economic assistance from other countries, while Japan wants to settle the abduction issue."

"If Japan and North Korea think they can create a win-win agreement, Kishida would get a chance to meet with Kim in the future," he said.

Kishida, known as a moderate with a steady hand, won the ruling Liberal Democratic Party's presidential election on Wednesday in a runoff, positioning him to become Japan's next prime minister in early October.

The United States and its Asian security allies, Japan and South Korea, have no diplomatic ties with the North. The Korean Peninsula has been divided as the 1950-1953 Korean War ended in a cease-fire. Washington, which fought alongside Seoul, technically remains in a state of war with Pyongyang.

Since its founding in 1948, meanwhile, North Korea has kept up stern rhetoric on Japan to promote propaganda of the communists in the nation and demanded it to pay post-World War II compensation. Japan colonized Korea from 1910 through the end of the war in 1945.

In a statement released four days before the LDP presidential election, North Korea said it would "never interact" with a Japanese political leader who is likely to maintain a "hostile policy" toward the Asian country.

North Korea has also been stepping up provocations since September, such as staging a military parade in its capital Pyongyang and test-firing new types of hard-to-intercept ballistic missiles.

Another diplomat in Beijing said North Korea's recent moves suggest that it may be employing "brinkmanship" to get the United States to ease economic sanctions by increasing the security threats in the Asia-Pacific region.

Nevertheless, Pyongyang has voiced its intention to leave the door open for an inter-Korean summit in an apparent bid to receive aid from Seoul, he said, adding Kim must be placed "in a very difficult position to prevent an economic meltdown."

Kishida, who has experience holding talks with his North Korean counterpart during his term as foreign minister from 2012 through 2017, has pledged to compel Pyongyang to abandon its missile and nuclear development program by putting "maximum" pressure on it.

Japan's de facto next prime minister, however, said in September that it is "important to come up with a scenario for summit talks" with Kim while coordinating with the U.S. President Joe Biden administration over North Korea.

Shawn Ho, an associate research fellow at the S. Rajaratnam School of International Studies in Singapore, said, "A new Japanese prime minister and new policy towards North Korea may represent a fresh opportunity to reset the Japan-North Korea relationship."

"A successful effort by the next Japanese administration to engage North Korea might also help boost the chances of U.S.-North Korea and inter-Korean dialogue or negotiations regarding North Korea's nuclear and ballistic missile programs," Ho said.

Since North Korea embarked on its summit diplomacy with various other nations in 2018, "Japan has yet to have a summit meeting with North Korea," he said.

"If such a summit meeting can take place, this would represent an additional useful key pillar to the overall trilateral U.S.-Japan-South Korea strategy to have dialogue with North Korea and negotiate with it over its nuclear and ballistic missile programs," Ho added.

After five abductees were brought back to Japan in 2002, Tokyo has been seeking the return of 12 others whom it has officially recognized as having been abducted by North Korean agents. It also suspects North Korea's engagement in other Japanese citizens' disappearances.

Pyongyang has claimed that the abduction issue has been "already resolved," saying eight of them, including the iconic abductee Megumi Yokota, have died and the other four never entered the country.

In May 2014, when Kishida served as foreign minister, Japan and North Korea reached an accord in Stockholm on principles for negotiations toward the settlement of the abduction issue. Japan relaxed its sanctions on Pyongyang, which in turn promised a full-scale investigation into it.

But North Korea repeatedly postponed reporting the survey results. The nation then disbanded its investigation team and suspended the probe after Japan levied further sanctions in February 2016 in reaction to Pyongyang's nuclear and missile tests.