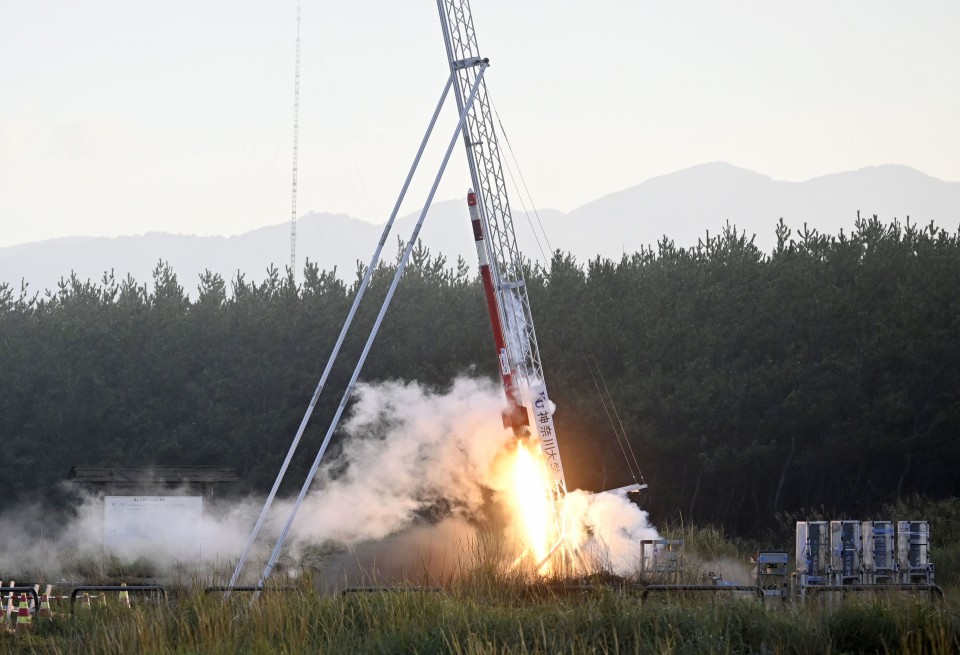 A small hybrid rocket is launched by Kanagawa University students on Sept. 19, 2021, in Noshiro in Akita Prefecture, northeastern Japan. The rocket reached the highest altitude ever achieved by a hybrid rocket in the country of about 10.7 kilometers, according to preliminary data. (Kyodo) ==Kyodo

TOKYO - Three of the four candidates vying to be Japan's next prime minister said Monday that summit talks with North Korean leader Kim Jong Un are necessary to resolve the long-standing issue of Japanese nationals abducted by Pyongyang decades ago.

HONG KONG - All but one member of Hong Kong's revamped Election Committee will be pro-Beijing members, according to official results announced Monday after an election was held under the new Beijing-imposed electoral system aimed at ensuring that only "patriots" govern the city.

The powerful committee with no pro-democracy camp member will be tasked with electing 40 members of the enlarged 90-seat Legislative Council in December, as well as picking the city's new chief executive in March.

A senior official of United Russia, Andrei Turchak, said at a political rally in Moscow that the party had "obtained a clean and honest victory" in the election for the 450-member State Duma, according to local media.

TOKYO - More than 200 Japanese companies and organizations, including Toyota Motor Corp. and retail giant Aeon Co., will jointly develop a smartphone app to protect the human rights of foreign workers, an official of the Japan International Cooperation Agency said Monday.

The move, led by JICA, comes amid increased scrutiny by other countries over long working hours and harassment of foreign laborers in Japan. The app will allow technical trainees and other workers to consult with third-party organizations without informing their companies.

Fujii was the only climber to overcome the first problem in the final as he made it over all four boulders. Narasaki, the world champion in 2016 and 2019, made it past three.

TOKYO - A Thai woman was arrested Monday and charged with abandoning the body of her newborn baby in a toilet bowl after giving birth in a bathroom at a Tokyo condominium, police said.

Penpanassak Supaporn, 28, is suspected to have been around 25 weeks pregnant when she gave birth around Friday to a baby boy, leaving his body in the toilet.